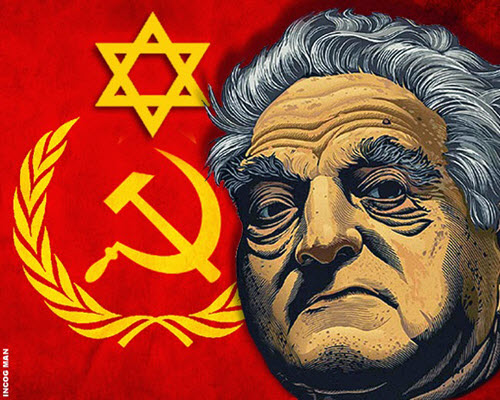 George Soros: Trump is a ‘would-be dictator’ destined to fail On the eve of Trump’s inauguration in Washington, D.C., Soros said Thursday during a panel discussion in Davos, Switzerland, that Trump was “gearing up for a trade war,” which would have “a very far-reaching effect in Europe and other parts of the world,” Agence-France Presse reported Friday.

The “would-be dictator … didn’t expect to win, he was surprised,” the Hungarian-born financier and Jewish philanthropist told an audience of business leaders and journalists at the site of the World Economic Forum.
Click here for the full story Donald Trump speaking at a rally against the Iran nuclear deal in front of the Capitol in Washington, D.C., Sept. 9, 2015. (Nicholas Kamm/AFP/Getty Images)

(JTA) — Donald Trump has been quick to bash the Iran nuclear deal, but slow to commit to doing anything about it.

This week he doubled down on his assessment of the agreement, which imposes limits on Iran’s nuclear program in return for relief from sanctions, as “one of the worst deals ever made.”

But the self-described dealmaker — who once told a room full of Republican Jews, “I’m a negotiator like you folks” — refused to say whether he would make any changes to the pact. JERUSALEM (JTA) — President-elect Donald Trump told an Israeli reporter that he will move the U.S. Embassy to Jerusalem.

Trump made the remarks at an event Tuesday evening in Washington, the Israeli daily Israel Hayom reported on Thursday.

Bismuth reported that during a conversation with Trump, he asked the president elect if he remembered telling him in a previous interview that he would move the U.S. embassy to Jerusalem and recognize Jerusalem as the capital of Israel.
Click here for the full story

JERUSALEM (JTA) — The Israeli Air Force received the first advanced interceptors of the Arrow 3 missile defense system, which is being jointly developed by the United States and Israel.

The rockets, worth about $2.2 million each, were delivered Wednesday, according to reports in the Israeli media.

The Arrow 3 missiles were designed to enable interception of ballistic missiles beyond the earth’s atmosphere. Interception at that altitude enables missiles carrying nuclear warheads to be blocked farther from Israel and increases the overall odds of interception.

The American aviation firm Boeing and the U.S. Department of Defense are working together on the project, which is being run by Israel Aircraft Industries, a state-owned company. The missiles are being developed with U.S. funding.
Click here for the full story Supporters of National Council of Jewish Women and other Jewish organizations come together on the National Mall for the Women’s March on Washington, January 21, 2017. (Ron Sachs)

The march Saturday, focusing on anticipated rollbacks in abortion rights under the new president and broader issues like discrimination against minorities and preserving former President Barack Obama’s health care reforms, included among its hundreds of official partners a number of Jewish groups.

Organizers estimated that it drew at least twice the 250,000 they had anticipated. Clogging the city’s streets and subway system for hours, it appeared to dwarf the crowds who had attended Trump’s inauguration the day before.

Similar marches took place across the country and around the world, drawing what media said were millions of women – as well as many men – to protest Trump and support a progressive agenda.
Click here for the full story

President Donald Trump delivers his inaugural address on the West Front of the U.S. Capitol on January 20, 2017 in Washington, DC. (Alex Wong/Getty Images/AFP)

The Conference of Presidents of Major American Jewish Organizations praised the unifying portions of Trump’s speech and called on him to safeguard Israel’s security and other Jewish interests.

“We welcome President Trump’s acknowledgement of the need to heal the divisions in our country, to improve the lives of all Americans, to reinforce alliances and to strengthen our security,” the statement said. “We look forward to working with President Trump and his administration to deepen the historic special relationship between the US and Israel, enhance the safety and security of the Jewish state and its people and on other issues of vital importance to the American Jewish community.”

While Trump promised to “reinforce old alliances and form new ones,” he also said the United States “subsidized the armies of other countries while allowing for the very sad depletion of our military.’”

“We’ve defended other nation’s borders while refusing to defend our own, and spent trillions of dollars overseas while America’s infrastructure has fallen into disrepair and decay,” the new US leader said.
Click here for the full story

President-elect gets no love from overwhelmingly Democrat Jewish singers, actors and comedians

US President Barack Obama, right, presents the Presidential Medal of Freedom to Barbra Streisand during a ceremony in the East Room of the White House, on Tuesday, Nov. 24, 2015 (AP Photo via JTA/Evan Vucci)

JTA — While Donald Trump’s upcoming inauguration has empowered his supporters — whom many commentators say were ignored by the Democratic party — many liberal voters are feeling extremely nervous and anxious. The latter group — unsurprisingly— contains many Jewish celebrities.

Barbra Streisand, for instance, who vocally supported Hillary Clinton throughout the presidential campaign, called the president-elect “clueless, reckless, graceless, mindless and heartless” in a Huffington Post piece on Wednesday.

“He doesn’t just bring economic policies I happen to disagree with, or an approach to healthcare funding that could hurt millions of people. This isn’t simply a matter of Republican versus Democratic. This is a man who, on record and often on video, disparaged or outright ridiculed women, immigrants, the disabled and others.”

Other celebs have taken to Twitter to voice their opinions and fears about Friday’s inauguration.

This just in: Trump Inauguration invitations have been declined by several Bibles that would rather he not touch them.

Iraqi Vice President Nouri al-Maliki says the government of US President Barack Obama is responsible for the rise and spread of the Daesh terrorist group in the Arab country.

“Daesh is a creation of the outgoing US President Barack Obama’s administration, which has caused bloodshed in Iraq, Syria and Yemen,” said Maliki, who is the secretary-general of the Islamic Dawa political party.

Speaking in an exclusive interview with Sky News Arabia television news network earlier this week, US Secretary of State John Kerry had accused Maliki of being behind Baghdad’s weakness and growth of the Daesh terrorist group in Iraq.

Kerry said Maliki contributed to the formation of Popular Mobilization Units, commonly known by the Arabic word Hashd al-Sha’abi, claiming that the group had weakened government forces in face of Daesh militants.

Hashd al-Sha’abi fighters joined forces with Iraqi army soldiers and Kurdish forces in a major operation on October 17, 2016 to retake the strategic northern city of Mosul from Daesh terrorists.

The pro-government fighters also played a major role in the liberation of Tikrit, located 140 kilometers northwest of Baghdad, as well as Fallujah city in the western province of al-Anbar among many areas in Iraq.

Fiddling with ‘core issues’ in Middle East can be ‘explosive,’ Obama warns

In his last press conference held on Wednesday just two days before leaving the White House, Obama also warned of an “explosive” Middle East after “sudden unilateral moves,” by the United States, in an apparent reference to Donald Trump’s calls for moving the US embassy from Tel Aviv to East Jerusalem al-Quds.

Trump believes East Jerusalem al-Quds, occupied by Israel since 1967, is “the eternal capital of the Jewish people,” and has promised to move the US embassy to it.

Obama warned that “the president-elect will have his own policy,” towards the situation in Palestine, asserting that “it’s a volatile environment. What we have seen in the past is when some unilateral moves are made that speak to some of the core issues and sensitivities of either side, that can be explosive.”

Obama also defended his recent decision not to block a UN Security Council resolution against construction of illegal settlements Israel builds in Palestine, a measure that further complicated ties between Washington and Tel Aviv.
Click here for the full story

Tzipi Livni threatened with arrest if she lands in Brussels (JTA) — Tzipi Livni will be detained and questioned in connection with war crimes charges if she lands in Brussels, a Belgian Justice Ministry official said ahead of the Israeli politician’s planned visit there.

On Thursday, Belgium’s Le Soir daily quoted a federal prosecutor as confirming authorities intention to detain Livni, a centrist lawmaker, as per a complaint filed against her by a local pro-Palestinian group in connection with Israel’s 2009 assault on Hamas in Gaza when Livni was foreign minister.

According to Israel Radio correspondent Simon Aran, Livni has pulled out of the event, citing “personal reasons.”
Click here for the full story

Adelson casino to pay out $7 million fine to US authorities

Sheldon Adelson gestures on the sidelines of the Republican National Convention at the Quicken Loans Arena in Cleveland, Ohio on July 21, 2016. (AFP PHOTO / JIM WATSON)

LAS VEGAS — Billionaire Sheldon Adelson’s casino company is paying almost $7 million to US authorities to end a more than five-year corrupt practices investigation of the firm’s former relationship with a consultant in Macao and China, company and federal officials said Thursday.

With the agreement, Las Vegas Sands Corp. resolved twin probes of more than $60 million paid to an unnamed agent retained in 2006 to acquire a Chinese basketball team, plus other business dealings that include a Beijing real estate deal to promote casinos on the Cotai Strip of Macao, US Justice Department and FBI officials said.

The $6.96 million criminal penalty was in addition to a $9 million civil payment the company made in April to settle a US Securities and Exchange Commission investigation that found some payments to the consultant weren’t properly authorized or documented, the government said.

The company wasn’t charged with a crime and did not admit guilt in either case.

Sands spokesman Ron Reese characterized the payment announced Thursday as a monetary penalty, and said the non-prosecution agreement made no criminal finding.
Click here for the full story

The Syrian army has released footage of clashes with Daesh Takfiri terrorists in the country’s eastern city of Dayr al-Zawr.

In the footage released on Wednesday, Syrian troops can be seen while engaged in an operation against the terrorists in a cemetery area surrounding the city.

According to Syria’s official SANA news agency, the army and air force launched a fierce offensive against the terrorists earlier in the day, killing 15 terrorists and destroying a large number of the militants’ vehicles and equipment.

A car rigged with a large amount of explosives was also destroyed before it reached its target in the city’s airport.

Daesh terrorists, who control most of the province, have kept the remaining government-held areas of the city under siege since 2014.
Click here for the full story

Next Post Dr. Duke Calls Upon Young Men to Save Our People, Our Women, Our Families Our Children by First Embracing the Warrior Spirit!