An Israeli rabbi who has repeatedly made vicious anti-Gentile statements and is considered one of the most fundamentalist religious Zionist rabbis in the country has won the support of Jerusalem Mayor Nir Barkat as the city’s next chief rabbi, according to an article in the Haaretz newspaper. 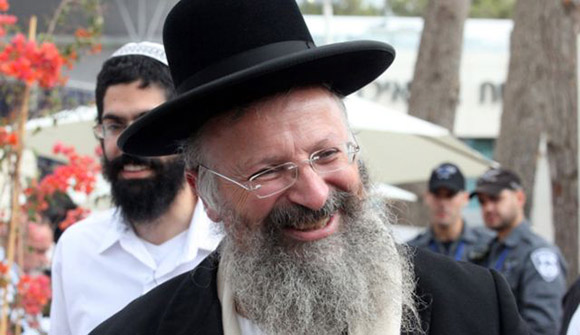 The family of Shmuel Eliyahu, who now serves as chief rabbi of Safed and is the son of the late Sephardi Chief Rabbi Mordechai Eliyahu, publicly endorsed Barkat’s candidacy as mayor.

According to Haaretz, Barkat said he back Eliyahu because he thought the odds of getting a religious Zionist elected to the Sephardi post were better than getting one chosen as the capital’s Ashkenazi chief rabbi.

During his term as chief rabbi of Safed, Eliyahu has issued religious rulings forbidding Jews to rent apartments to Arabs or foreign workers, and has called for Arab students to be ousted from Zefat Academic College in the city.

Eliyahu’s nomination for the senior post passed unreported in the Jewish Supremacist controlled mass media, and was only covered in Jewish newspapers such as Haaretz and the Jewish Telegraphic Agency (JTA).

The total blackout of coverage in the mass media directed at Gentiles over Jewish racism stands in stark contrast to what their reaction would be if anyone else had to make similar remarks about Jews.

Consider, for example, what would happen if a Catholic Bishop, or a Lutheran minister, a Buddhist priest or a Presbyterian minister had to call for their religious communities to actively discriminate against Jews.

The same mass media which covers up Jewish racism would be trumpeting from the rooftops endless complaints about any religious leader anywhere in the world who called for active discrimination against Jews. . . .

In October 2010, Eliyahu led a petition, signed by a large number of rabbis, urging Jews to refrain from renting apartments to Arabs.

The letter which accompanied the appeal, signed by Eliyahu, said that renting properties to Arabs would deflate value of homes as well as those in neighborhood.

In August 2002, Eliyahu called on the Academic College at Sefed to expel its Arab students.

The realization that his nomination might bring public light onto the true nature of Zionist Supremacist racism, has caused a number of rabbis outside Israel to call on Eliyahu to withdraw his nomination for rabbi of Jerusalem.

According to an article in the Jewish Telegraphic Agency, the overseas rabbis—mostly in America—said that appointing Eliyahu to the post would “send a message of divisiveness and intolerance.”

It is important to note that the rabbis have not disputed what Eliyahu has said—namely that Jewish racism is part of “Jewish law”—but only object to him because he has dared say it in public where the hated Goyim can actually hear him.