Today Dr. Duke picked up on the Zio media’s daily invocation of Richard Nixon as an example for the fate that awaits Donald Trump: impeachment and disgrace. Dr. Duke read numerous quotes from Richard Nixon that show how well aware he was of Jewish power and the Jewish role in the communist ideology that Nixon opposed. And yet, in public Nixon bit his tongue and even bailed out Israel in the 1973 Yom Kippur War at the risk of World War III. 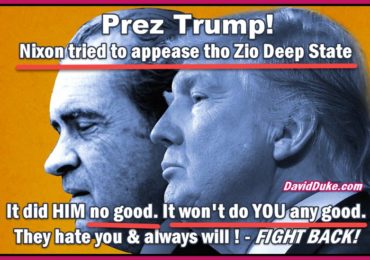 Previous Post Starbucks, evolution, the African invasion of Ireland, Father Ted, and much much more! With Mark Collett