By Dr. Patrick Slattery — Wonkette, a reasonably well-known liberal blog owned and run by Rebecca Schoenkopf, who once described herself as a “Polish-Russian Jew [who] thinks Poland can go f**k itself,” has entered into the fray regarding Dr. Duke’s critique of Nicki Minaj. 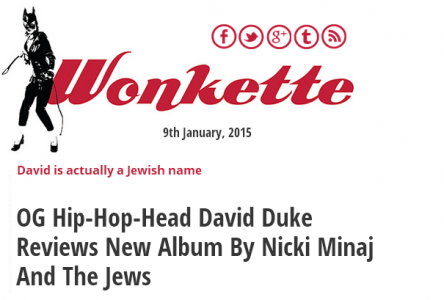 Oddly enough, Wonkette did not simply parrot the lie that Dr. Duke was attacking Minaj due to her speaking out against police brutalities. It started its story along the lines of the other slanderous articles by sympathetically quoting Minaj:

“People say, ‘Why aren’t black celebrities speaking out more?’ But look what happened to Kanye when he spoke out. People told him to apologize to Bush!

Frankly, this sounds more like an apology for hers and Kanye West’s shallowness than anything else, but to Wonkette and the rest of the Zio-media these trite words seems to be enough to make up for her filthy and depraved music videos and turn her into a hero for social justice.

But then Wonkette broke with the script by including the following:

Many members of the establishment media heard about David Duke’s comments and assumed he was criticizing Nicki Minaj for speaking out against police killings. This is not true. How do we know it’s not true? Well, because we visited David Duke’s website, on which an employee of David Duke Dot Com objects to this characterization of his remarks, saying his criticism was solely about the content of Minaj’s music.

They even included a link to my article proving the fallacies of the many lying articles. If they had stopped there, I would praise Wonkette for their integrity in elevating truth over political expediency.

However, they then proceed to satirically claim that they found a notebook of Dr. Duke’s in which he reviews Nicki Minaj’s latest album, an album they claim has been “critically and commercially well-received.” They then continue with a very crude and immature song-by-song account from this fictional notebook in which they project all their own racist fear and loathing on to Dr. Duke.

The effect is to make a complete mockery of the truth. Unless the reader actually clicks on the link to come to Dr. Duke’s site and reads my article, he or she may well assume that our objections are also false or fictitious, seeing as they were presented with the same mocking tone.

Can there be any better evidence that the whole of the Zio-media, from huge entertainment conglomerates like Universal Records and Sony Pictures down to obscure blogs like Wonkette actively promote traitors and sell-outs like Nikki Minaj and their depraved work while slandering anyone who would dare raise an objection?

For those who would like to help us counter these lies, here are some suggestions:

Please post POLITELY worded comments to the offending websites. Letters asking for retractions and apologies would also be welcome. Feel free to use your own words, but here are the main points:

For those requesting a retraction and apology, a letter along these lines would be useful:

“Your article erroneously accused David Duke of attacking Nicki Minaj for having spoken out against police brutality. In fact, Dr. Duke’s criticism of ‌Minaj is based on the obscene and depraved content of her music videos, and is completely unrelated to her comments about police brutality. In fact, Dr. Duke’s critique was made prior to the publishing of Minaj’s statement about the police. You should issue a retraction admitting your mistake and apologize to Dr. Duke.”

Here are some of the offending websites (but there are no doubt many more):

David Duke Calls Rapper Nicki Minaj a ‘Degenerate’ for Speaking Out Against Police Violence
by Josh Kilburn, Americans Against the Tea Party

Next Post Why the Media Lies about Dr. David Duke and Tries to Suppress His Words!