What is behind the push for war with Russia?

By Dr. Patrick Slattery — This is a Jewish thing. But it is not just that Jews want to destroy things for no reason. But this is, especially among the American Jewish elite, a vendetta against Vladimir Putin. This vendetta was described by American academia’s preeminent Russia scholar, Professor Stephen F. Cohen.

To be sure, Cohen did not say in so many words that this was a “Jewish” vendetta. But he also did not call it a “globalist” or “corporate” or “reptilian Nazi” vendetta, which are just ways of distracting attention away from the Jewish role. He blamed a war party which he described as led by the (((New York Times))), the (((Washington Post))), and officials in the Defense and State Department like (((Victoria Nuland))). Connect the dots for yourselves, goys.

He does not say why this “war party,” as he calls it, wants to regime change Putin. But a look at recent Russian history, a history that he has written so much about, makes it clear. 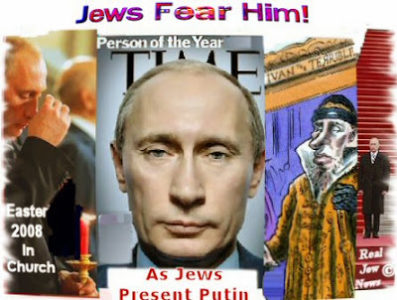 After the Soviet Union was dismantled in what was basically an unconstitutional coup carried out by the Russian President Boris Yeltsin at a time when Russia was just one (although by far the largest) of the 15 Soviet republics that made up the Soviet Union, he proceeded to privatize state assets as part of a “shock therapy” program pushed by Harvard Professor (((Jeffrey Sachs))), who was brought in as an advisor by Privatization Minister (((Anatoly Chubais))).

President Clinton sent over more Jews to advise Yeltsin on how to “reform” the economy, including Treasury Department officials (((Lawrence Summers))) (later Treasury Secretary) and (((Peter Orszag))) (later Budget Director). Under the Sachs plan, the Russian government issued vouchers to the population, which would be exchanged for shares in privatized companies. With the economy in free fall, people were willing to sell those vouchers on the cheap to anyone who would pay cash. And who had cash?

Chubais, Summers, and Orszag matched international Jewish financiers, like (((George Soros))), to young Jews with political connections. These young Jews with access to international financial capital were then able to buy up massive amounts of vouchers and take control of the privatized state assets. The international financiers could not do it themselves, because they were not Russian citizens. They needed fellow tribalists in Russia. A rigged “Loans for Shares” in the mid-1990s further solidified Jewish control over the Russian economy.

Meanwhile, living standards for Russians plummeted. Life expectancy for men fell by about eight years. Death rates sky-rocketed, mostly due to alcoholism, but starvation and freezing were not uncommon. Jews who did not benefit from this Jewish takeover of the country emigrated to Israel, the United States, or Europe. Their presence was not necessary in Russia.

Naturally, the Russians came to hate Yeltsin and his Jewish cronies. He was impeached by the parliament in 1993, only to send tanks to fire on the Russian parliament. He imprisoned the speaker of the parliament, Ruslan Khasbulatov, along with Vice President Aleksandr Rutskoy, who was actually the rightful president. He then re-wrote the constitution.

In the presidential elections of 1996, the Communist candidate Gennady Zyuganov surely defeated Yeltsin. “Hungarian-American billionaire George Soros, along with Russian oligarchs such as Boris Berezovsky, Vladimir Gusinsky, Mikhail Khodorkovsky, Anatoly Chubais, and others feared a Communist resurgence,” according to Zyuganov’s Wikipedia page. All the men mentioned in the preceding sentence are Jews. The Wikipedia article concludes that Yeltsin “relentlessly exploited his advantages of incumbency, patronage, and financial backing” to defeat Zyuganov. The Jews at HBO even made a movie about how “Americans” help Yeltsin steal the election. Check out “Spinning Boris” starring (((Jeff Goldblum))).

So who was this Zyuganov? A 1998 article by (((David Hoffman))) of the Washington Post reports the following:

MOSCOW, Dec. 24 Communist Party leader Gennady Zyuganov has declared in an open letter his belief in a Zionist conspiracy to seize power in Russia and asserted that “Zionist capital” has wrecked Russia’s economy.

The letter appeared to be aimed at the Russian business tycoons — known here as the “oligarchs” — who were instrumental in reelecting President Boris Yeltsin over Zyuganov in 1996. Most of the small circle of tycoons in this country are Jewish.

So the Jewish oligarchs needed a savior. Putin was supposed to be that man. With the help of alleged Chechen terroristic bombings in Moscow that rallied the public behind Putin and his hardline response, Putin won the 2000 election. But the problem for the Jews was that he used his popular support to take on the oligarchs. He put some in prison, others fled the country, and the rest reached an uneasy truce with him so that they could retain their fiefdoms in exchange for staying out of politics.

That brings us back to the war party that Professor Cohen describes. They think that they can topple Putin and restore the Jewish oligarchy. Victoria Nuland already did a dry run of this scenario in Ukraine. It’ is not as if they really want a nuclear world war, but they think they can pull off a Russian regime change, and are willing to risk nuclear war to do it. It may be delusional, but the payoff would be enormous.

The Jews are currently in control of most of the white world with the one big exception of Russia. Massive non-white immigration is on the verge of forever excluding the possibility that ethnic nationalists in these countries could ever pose a threat to their rule, although movements in many of these countries, including the Alt-right and Trumpism in America, show that the game is not yet over.

Via American hegemony, Jews indirectly dominate countries from Japan to Saudi Arabia. Countries like China and Iran may be independent, but only Russia has the military means to stand up to Zio-America.

So this is why we are on the brink of war with Russia. It is not because Putin is anti-gay. It is certainly not because of humanitarian concerns for the people of Aleppo. It is not even because the Israelis are pushing it. They are doing pretty well with the status quo, and already have gotten what they want from Russia. It is the Jewish elite, primarily in America, that sees Putin as an threat to Jewish power, just as Trump potentially is. So it should be no surprise that they are willing to do whatever it takes to remove Putin, even if it means war.

Next Post Dr. Duke and Mark Collett on the War on Donald Trump & His Transformation to a True Warrior for US!