By Dr. Patrick Slattery — I have never been either particular religious nor particularly anti-religious. So 20 years ago when I first started hearing about this judge down in Alabama who insisted on displaying the Ten Commandments in his courtroom, I did’t get bent out of shape. But I sure never thought I would be writing an article in defense of this man for scandal allegations that I have no direct knowledge of.

But what I do have direct knowledge of is the fact that the Washington Post and the rest of the Jewish elite media, like the New York Times, NBC, CNN, and on and on, hack our elections bigly. I am outraged that the Washington Post seems to think they can send some reporter to Alabama to scrape around the muck for weeks in order to find a woman to allege some misdeed 38 years ago in order to sink a Senate candidate whom they see as a threat to Jewish interests.

Now, after having heard Judge Moore’s interview with Sean Hannidy, I think it is entirely likely that when he was in his early thirties he may well have dated girls in their late teens. He hemmed and hawed when asked about that. But regarding the only accusation that really crosses the line — that he came on to a 14-year-old-girl — Roy Moore was categorical that he never did such a thing and never met the accuser.

So it is a “he said she said” situation. Or more like “she was told to say,” because it wasn’t as if these women just suddenly decided to step forward and break their silence. No, the Washington Post sent reporters to Alabama to scuttle Moore’s candidacy as soon as he one the Republican primary. 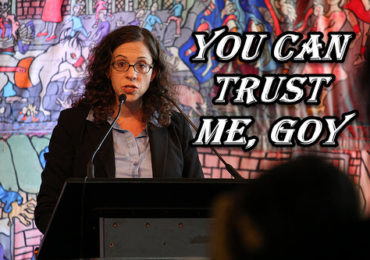 So The Post was in Alabama reporting an unrelated story and heard that Roy Moore had pursued young girls when he was first a prosecutor.

And another reporter and I spent weeks in Alabama chasing these leads and reaching out to a lot of people. And when we did reach the women who are quoted in the story today, none of them initially were willing to speak on the record. They were all very reluctant to share their story publicly, and it was only after multiple interviews with them that they decided to come forward.

So this Jewish reporter is admitting that not a single woman wanted to make accusations against more, but rather had to be persuaded. So how hard is it to imaging that The Post didn’t find some woman of the right age and geographical location, perhaps someone in financial trouble, to say she had gone out twice with Moore and that he touched her inappropriately? The only corroboration that The Post offers is pretty sketchy and could easily be bought.

Here are the two main points:

So the real issue here is not whether or not Moore had a Lolita complex 38 years ago, but rather are we going to let these Jews “hack our elections” and “attack our democracy” simply by making unverifiable accusations against any candidate who doesn’t meet their vetting criteria? Let’s face it, even if all the allegations were true, I guarantee you that Congress is full of people guilty of much worse. On the other hand, nothing is more dangerous than continuing to give the Jewish press veto power over who we are allowed to vote for.

Previous Post Dr. Duke & Mark Collett – Thank God for Jewish Chutzpah Redpilling the World & Why It is OK to be White!

Next Post Dr. Duke: The Incredible Psychopathy of Jewish Chutzpah & Why it Redpills Us!