Vladimir Putin has a long history of “embracing Jews”—but even so, Jewish Supremacists still question his stand towards them, a new insightful article in the Jewish Telegraphic Agency has revealed. 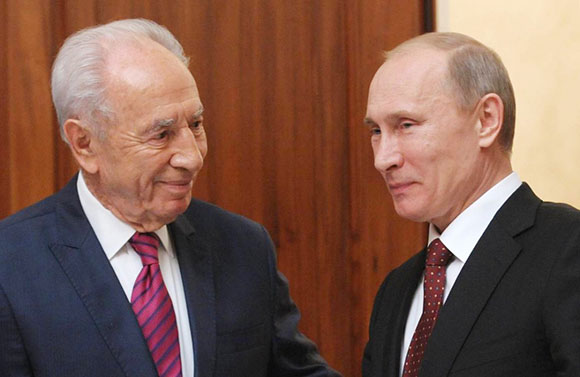 Titled “Jewish embrace: Is it love or politics?,” the JTA article, written in the light of events in the Ukraine, says that:

“Few would dispute that Putin has been friendly to Jewish institutional life in Russia — especially to organizations and leaders that belong to the Chabad Hasidic movement.

“Gorin, a Chabad rabbi and chairman of Moscow’s $50 million Jewish Museum and Tolerance Center, credits Putin personally for providing state funding for the institution, which opened in 2012. Putin also donated a month’s wages to the museum.

The JTA article goes on to reveal that Putin traces his earliest connection to Judaism back to his early childhood in Leningrad, now St. Petersburg, when he befriended a Jewish family that lived in his apartment block.

“In his 2000 autobiography, Putin wrote that the unnamed family loved him and that he used to seek its company.”

“They were observant Jews who did not work on Saturdays and the man would study the Bible and Talmud all day long,” Putin wrote. “Once I even asked him what he was muttering. He explained to me what this book was and I was immediately interested.”

Another influential Jewish figure for Putin was his wrestling coach, Anatoly Rakhlin, who sparked the young Putin’s interest in sports and got him off the rough streets of Leningrad, where Putin would get into fights while his parents worked. At Rakhlin’s funeral last year, Putin, reportedly overcome by emotion, ditched his security detail and went on a short, solitary walk, the JTA reported.

The JTA also pointed out that Putin has positioned himself as a defender of Jews as part of his effort to discredit the revolution that ousted his ally, former Ukraine President Viktor Yanukovych.

The fact that many leading figures in the Ukraine “revolution” have turned out to be Jews, is ignored by the JTA article which then goes on to say that many other Jews “see more cynical motives behind Putin’s embrace of Russian Jewry.

“Putin has been facing international criticism for a long time now over human rights issues,” said Roman Bronfman, a former Israeli Knesset member who was born in the Soviet Union. “He needs a shield, and that’s the Jews. His warm relations with Russia’s so-called official Jews are instrumental.”

Bronfman calls Putin’s childhood accounts “a smokescreen” and likens them to the Russian leader’s friendly gestures toward Israel, which he last visited in 2012.

Putin, who already led Russia to sign a visa waiver program with Israel in 2008, said during his visit to Israel that he “would not let a million Russians live under threat,” referring sympathetically to the regional dangers facing Israel and its Russian-speaking immigrant population.

But at the same time Russia has criticized European sanctions on Iran, a major Russian trading partner, and negotiated the sale of the advanced S-300 air defense system to Syria.

“It’s all pragmatic with Putin,” Bronfman said. “He says he regards the million Russian speakers living in Israel as a bridge connecting Russia to Israel, but when it comes to Russian interests in Syria or Iran, this friendship counts for very little.”

In Israel, Putin received a guided tour of the Western Wall from Lazar, who joined Putin’s entourage — vividly illustrating the president’s close ties to the Russian branch of the Chabad movement.

Shortly after taking office, the Putin government clashed with several prominent Jewish business moguls, including Vladimir Gusinsky and Boris Berezovsky, both of whom went into self-imposed exile.

“When he went after these oligarchs, Putin sensed that this could be interpreted as anti-Semitism,” Gitelman said. “He immediately, publicly, demonstratively and dramatically embraced Chabad.”

Chabad, meanwhile, has expanded throughout Russia.

“Chabad, with the help of Putin, is now the dominant religious expression of Judaism in a mostly nonreligious population,” Gitelman said.

Thus it seems, even a leader like Putin who does all he can to embrace Jewish Supremacism, will be attacked by those same fanatics if he dares to do anything at all with which they do not agree.

The lesson of Putin is therefore clear: nothing less than total subservience will do, and even the slightest indication of real independence or even an attempt to put Russian interests on the same level, earns their scorn.

Previous Post Why Does the Media Refer to Illegal Immigrants as “Infiltrators” in Israel, but “Asylum Seekers” in Europe?