Posted by STAFF — Dr. Duke had some amazing news for his listeners today: A statistical study conducted by two professors of the Google search engine shows that tens of thousands of people have on their own edited and posted thousands of Dr. Duke’s videos, TV and Radio programs, speeches and university lectures across the globe.

The combined views based on YouTube analytics is now at over one billion, and these videos receive over a 92% positive rating!

Furthermore, unlike a mindless music video that may be viewed dozens of times by the same viewer, a Dr. Duke documentary is unlikely to be watched by the same person more than once or twice.

Fiends, Dr. Duke,with our support is waking up the West and the World! 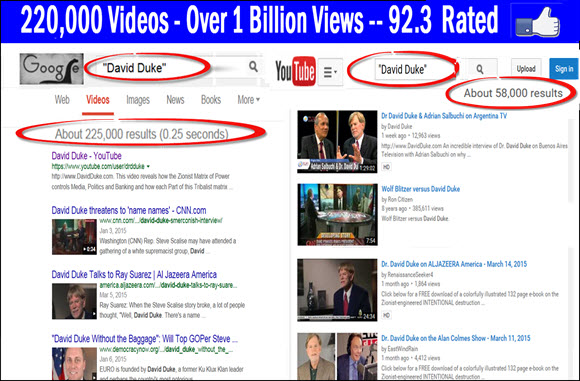 The professors preformed an analysis of the number of video postings listed on the Google video search engine using the exact phrase “David Duke” in quotation marks. Then from a statistically significant random sampling of the results were able to determine that there were over 50,000 videos of Dr. Duke’s work, including his self-made videos, on YouTube alone and over 210,000 on all platforms. 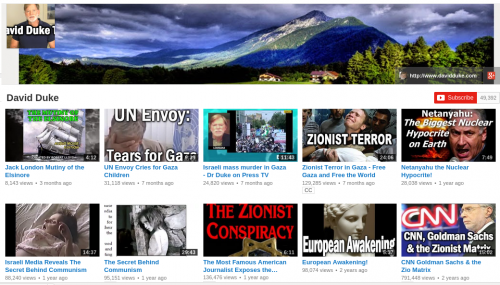 Then Dr. Slattery joined the show and pointed out that the viewers of these videos must come from a variety of backgrounds. He referenced an article in the Jewish Daily Forward newspaper criticizing England’s Green Party (a “left-wing” environmental party represented in the British Parliament and the Parliament of the European Union) for circulating Dr. Duke’s work on its internal email discussion lists.

He concluded that people with a variety of value systems, whether they be based on religion or environmentalism or human justice, can look at the information presented in Dr. Duke’s videos and agree with his conclusion that domination of the world by a small tribe motivated by maximizing its own ethnic power is not in the best interest of the rest of the world.

This is an inspiring show that demonstrates that incredible progress is being make and will give you hope that truth will win out in the end.