Staff — Victory! After a long drawn out fight we heard from friends at the Presbyterian Church national meeting who told us that they were victorious and in an amazing move, the Church voted to divest from companies doing business in the brutally occupied West Bank. 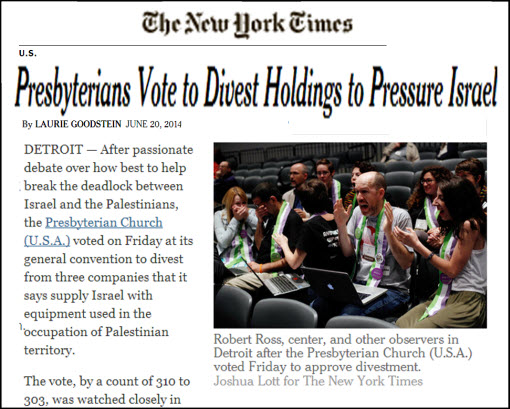 They were especially pleased because of the Jewish efforts to derail the effort by pointing out that a major subject of the paper of the Church used used the term that Dr. David Duke has popularized all over the world: Jewish Supremacism, which encapsulates the Zionist and Jewish racist reality in both Palestine and around the world.

“They tried to threaten the voters by saying that “David Duke” supports this policy and that the Church will get a bad name by supporting something that Dr.Duke has been tied to in the media,” Said Melissa Anderson who was there with close friends who voted on the divestment. “But, people are just not listening to the Jewish racist threats anymore, they are starting to stand up for real justice.”

Dr. David Duke, currently on a lecture tour, was reached and he made this official comment.

‘Israel is based not only on ethnic supremacism, but on massive terrorism and ethnic cleansing.

All people who know anything about Palestine know this, but the Jewish supremacist media in America and the Jewish dominated government of this country won’t speak the obvious truth.

Israel makes it illegal for a non-Jew to marry a Jew.

–Any European nation that would forbid Gentiles from marrying Jews would be demonized as racist.

–Any nation in Europe or the Americas that built apartments or settlements where only Jews were allowed would face universal condemnation.

Because through ethnic racism and tribalism they discriminate against Gentiles and take over media and other institutions.

Their racist power over the media and government is why Israel can get away with it all.

But people can stand up.

Bravo to the Presbyterian Church for standing up to Jewish racism and supremacism!

The world is waking up to Jewish supremacism!”

Previous Post Hear Dr. David Duke on the Power of Belief in Changing Yourself & Changing the World!