By Dr. Patrick Slattery — Donald Trump was the first presidential candidate I ever supported who actually won, and his election was the happiest day of my professional life. He warned us that we will have to get used to winning, and now…

Did you click on the link above? It says:

That is the happiest I have ever been to see a broken link. She has been fired by Donald Trump. Listeners to the David Duke show know that for more than three years I never missed an opportunity to point out that Assistant Secretary of State for European and Eurasian Affairs Victoria Nuland was the driving force in the Obama Administration for an aggressive policy towards Russia that aimed at regime change in Moscow and was more than willing to risk World War III to do so. In furtherance of that aim, she engineered the coup d’etat in Ukraine that replaced the constitutionally elected President with what amounts to a Jewish junta.

And now she’s gone. While she ought to be in prison for all the lives she snuffed out in the civil war in Ukraine that she provoked, she will no doubt land a very prestigious job in a Jewish-run think or even at a university, despite her lack of academic credentials. The tribe still calls the shots at the universities. She will be a mainstay on network television as a foreign policy expert critiquing President Trump’s follies. But at least she won’t be secretary of state, which was likely what she would have been if Hillary had won the election.

Nuland was kicked out along with the rest of the State Department leadership. I cannot verify the accuracy of this chart, but it has been circulating on the internet. 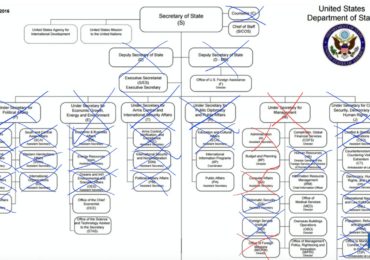 This looks like “draining the swamp.” Still, I suppose I shouldn’t get too used to winning. The bulk of the replacements are bound to come from the same swamp of the foreign policy establishment, namely think tanks, universities, and the bureaucracy itself. This is all Zionist occupied territory. If we lived in a self-governing country, someone like myself with credentials and experience and a track record of being right and supporting the new president and his policy priorities would stand a good chance of being brought into the administration. However, anyone who has pointed out the massive damage caused to our society by Jewish power is persona non grata in polite company.

There is a lot of talk that uber-neocon Jew Eliot Abrams is being considered for the number 2 position at the State Department. I don’t really believe this is true. All reports seem to be based on an unsourced assertion in a Washington Post article written by Jewish reporter Josh Rogin. I think Rogin might just be lying in order to create a buzz for Abrams, knowing that, at least up until now, Jewish reporters face zero consequences for lying. He also dropped the name of neocon goy Paula Dobriansky.

Rex Tillerson already rejected John Bolton as his deputy, so I don’t see why he would take on any of Bolton’s colleagues from the tight little neocon clique that has caused so much carnage around the world. However, Tillerson has so many positions to fill and the foreign policy establishment has been under Zionist control for so long that horrible people are bound to get some important jobs.

All this underscores the urgency of moving the Overton window so that we, who are currently oppressed dissidents (even if we are largely responsible for Trump’s election), can come out of the shadowy world of alternative media and into the halls of power.

Next Post Dr. Duke and Mark Collett of UK on his Great New Book: The Fall of Western Man & They Discuss the Core Principles of Our Worldwide White Movement!