By Dr. Patrick Slattery — I am a big gorilla enthusiast, so when I heard about Harambe from the Cincinnati Zoo being shot because a young boy fell into his enclosure I was upset. (I have some familiarity with the enclosure, as you can see below.)

Next thing I know, the internet is full of stories about BlackLivesMatter types calling out the Cincinnati Zoo for killing the unarmed black teenage male gorilla to “save” a white child whose irresponsible white parents let it crawl into the gorilla cage. They call this yet another example of “white privilege” and “white supremacy.”

Now, I personally do not want to second guess the decision by the zoo management, but I do want those with expertise on the issue to weigh in on whether the action was really necessary and I think that anyone whose negligence contributed to this tragedy should be held accountable.

But getting back to the racial issue, Breitbart is reporting that the child in question was not in fact white, but rather was black. The pictures below are unclear, but his head shape and haircut seem more characteristic of black boys.  If that is the case, one might indeed ask if the zoo management acted so hastily to sacrifice the animal because they were afraid of being called racist. 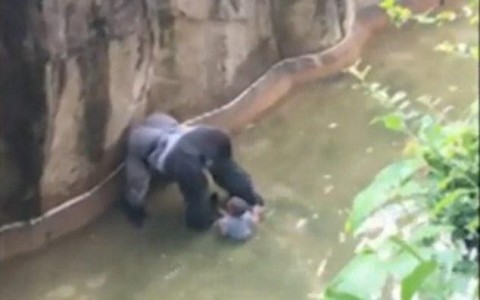 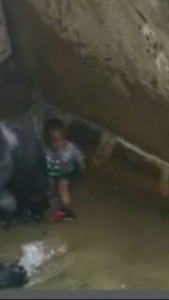 In fact, there have been cases in the past where white children have fallen into gorilla enclosures and have been “protected” by one until the child could be rescued without harming any animals. One example is recounted at the bottom of this article from the Daily Mail. My guess is that race didn’t enter into the decision, one way or another.

So what we have here is blacks, egged on by the Zio-media narrative of white hatred, blaming anything and everything on white supremacy. A few days ago a Chinese laundry detergent commercial provoke a storm of internet outrage, because it featured a Chinese women shoving black man into a washing machine and pulling out a Chinese man.

On CNN, anchor Ana Cabrera asked black Morehead State University Professor Marc Lamont Hill about this “most racist commercial ever,” and this is what he had to say:

But there is a racial divide in China, and I think part of it is that many people don’t recognize that African people, black people are everywhere. There are black people in China right now in the southern region who deal with anti-black racism. And so, an ad like this is not just a product of people not knowing about black people or China being in its own bubble, no, this is a reaction to racism in the country. There’s a racial divide everywhere. White supremacy is ubiquitous in this world.

So you see, when Chinese people hurt black feelings, it’s white supremacy. By the way, CNN noted that the Chinese ad was completely plagiarized from an Italian commercial, the only difference being that a white man was pushed into the washer and a sexy, almost nude black man came out. Funny, but nobody called that racist, even when they played it on the CNN broadcast!

As for Harambe the gorilla…

I shot this video is on April 18, 2015, shortly after the Harambe, who was killed yesterday, joined the troop at the Cincinnati Zoo. I had just finished explaining to my companion that gorillas habitually walk on their knuckles and have difficulty walking on two legs because their knees don’t lock when, low and behold, it stands straight up and walks off in the most nonchalant manner. I don’t think that it was Harambe, judging from the relative lack of sliver hair on the walking gorilla’s back. More likely, it was one of Harambe’s female companions. Still, you get a good view of the enclosure, and it was funny that the gorilla chose just that instant to walk upright. As for Harambe, such a tragedy!

For those of you who are interested in Harambe at a happier time, this is a video of him taken four days earlier on April 14, 2016, the first day he entered the enclosure.