The long-suppressed topic of inordinate Zionist Jewish influence on American foreign policy is now being openly debated—as it should be. Independent voices that had been condemned for years for daring to talk about the power of the Jewish lobby are now being vindicated.

The release of a “controversial” new book, The Israel Lobby and U.S. Foreign Policy, by two distinguished foreign policy specialists, John Mearsheimer of the University of Chicago and Stephen Walt of Harvard— coming on the heels of a frenzy surrounding former President Jimmy Carter’s candid criticism of that lobby— has sparked not only widespread discussion of the Jewish lobby, but also public consideration of the more important question: “Is America’s special relationship with Israel in America’s best interests?”

The debate has pried open what Leslie Gelb, president emeritus of the Council on Foreign Relations, admitted— in a critical review of the book in The New York Times September 23—is a subject “that many Middle East experts talk about mostly in private.” The Times headlined Gelb’s review with the notation that Mearsheimer and Walt “contend that the Jewish lobby jeopardizes the national security of the United States.”

First launched in 2006 as an academic paper, there was—as the New York-based Jewish newspaper, Forward, noted correctly—little that was new in its pages. Anyone who had been reading American Free Press or who— going back to the 1960s—followed the work of Liberty Lobby, the Washington-based populist institution, knew the facts being reported by the two academics.

Indeed, much of the Mearsheimer-Walt material had already appeared two years earlier in The High Priests of War, published by AFP, the first-ever full-length exposition of the role the Jewish lobby and its neo-conservative stalwarts played in pushing the United States into Iraq.

Mearsheimer and Walt expanded their original paper into a book. Here, the two academics rush to proclaim themselves responsible critics of Israel and not irresponsible “anti-Semites,” even though Jewish lobby voices continue to insist that what the academics are saying is “anti- Semitic” in nature, even if the professors aren’t “anti- Semites,” implying, not so gently, that they are. Meanwhile, the professors allege other critics of Israel are “conspiracy theorists” and say that they themselves are not, even though the two say the same things other critics of Israel are saying. These bizarre semantic gyrations are a diversion from the important material in the book. 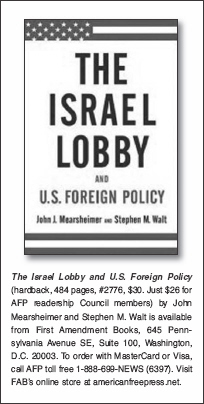 What is also troublesome about the book is that although it is an assembly of important material (echoing AFP) the authors have little to say about Israel’s arsenal of nuclear weapons of mass destruction and barely note John F. Kennedy’s strenuous effort to prevent Israel from building a nuclear arsenal and hardly note Israel’s nuclear intrigues and the dangerous impact on U.S. foreign policy.

However, the fact that the book is generating discussion about the U.S. relationship with Israel is good, particularly when the Jewish lobby is now busy denying its culpability in getting the U.S. involved in Iraq, even as it escalates efforts to get America into a war against Iran.

This is all happening just as Rep. Jim Moran (D-Va.), is under fire (yet again) for having dared to suggest that the American Israel Public Affairs Committee (a registered lobby representing Americans who support Israel) “has pushed [the Iraq] war from the beginning,” adding that, “They are so well organized, and their members are extraordinarily powerful—most of them are quite wealthy—they have been able to exert power.”

For having made these remarks in an interview with Tikkun, a magazine published by a rabbi, Michael Lerner, who is an outspoken critic of Israel and the Israeli lobby in America, Moran has been accused of promulgating “age-old canards” that his Democratic colleague, House Majority Leader Steny Hoyer (Md.) declared are “absolutely not true,” that is, “that the Jewish community controls the press, media, government and other institutions.”

Moran’s latest comments restated what Moran said in the spring of 2003 when he expressed his opinion that “If it were not for the strong support of the Jewish community for this war with Iraq, we would not be doing this. The leaders of the Jewish community are influential enough that they could change the direction of where this is going, and I think they should.”

In truth, despite howls of denial by Israel and its lobby that they played no part in promoting the U.S. war on Iraq, published evidence indicates the government of Israel did call for a U.S. assault upon Iraq, a venture perceived by the Israelis and their American advocates as a first step toward action against other perceived enemies of Israel, especially Iran.

For example, on Feb. 18, 2003, the Israeli newspaper, Ha’aretz, reported that then-Israeli Prime Minister Ariel Sharon was calling for the United States to move on Iran, Libya and Syria after what was presumed to be the successful destruction of Iraq by the United States. Sharon said: “These are irresponsible states, which must be disarmed of weapons of mass destruction, and a successful American move in Iraq as a model will make that easier to achieve.” The Israeli prime minister told a visiting delegation of American congressmen that “the American action [against Iraq] is of vital importance.”

In addition, on Feb. 27, 2003, The New York Times reported that Israel not only advocated a U.S. war on Iraq but that Israel also believed that, ultimately, the war should be expanded to other nations perceived to be threats to Israel. The Times reported:

Many in Israel are so certain of the rightness of a war on Iraq that officials are already thinking past that conflict to urge a continued, assertive American role in the Middle East. Defense Minister Shaul Mofaz told members of the Conference of Presidents of Major American Jewish Organizations last week that after Iraq, the United States should generate “political, economic, diplomatic pressure’’ on Iran. “We have great interest in shaping the Middle East the day after’’ a war, he said. Israel regards Iran and Syria as greater threats and is hoping that once Saddam Hussein is dispensed with, the dominoes will start to tumble.

Now the target is Iran. Just this month, the Anti- Defamation League (ADL)—an influential cog in the Jewish lobby—launched what it called “a public awareness and advocacy campaign aimed at focusing attention on the gathering threat of a nuclear-armed Iran to Israel, the Middle East and the world.”

The ADL sent 6,000 propaganda posters to Jewish synagogues and Jewish organizations across the country, declaring the campaign against Iran to be “a political and social justice issue of the utmost urgency.”

Although even a wide-ranging array of Israeli journalists (and American Jewish writers sympathetic to Israel) have quietly acknowledged, buried in the pages of books and policy journals that most Americans never read, that Iran is hardly likely to ever wage any kind of war (nuclear or otherwise) against Israel, the Israelis and their propaganda outlets in the United States are nonetheless working to build up a public frenzy against Iran, setting the stage for an American (and/or Israeli) attack on that Islamic republic. 