The arrest of veteran activist and Washington D.C. director of operations for the National Council of Jewish Women, Sammie Moshenberg, for public disorder offences during a pro-immigration rally in our nation’s capital this week has once again highlighted the staggering double standards that the Jewish Supremacists use on all non-Jews. 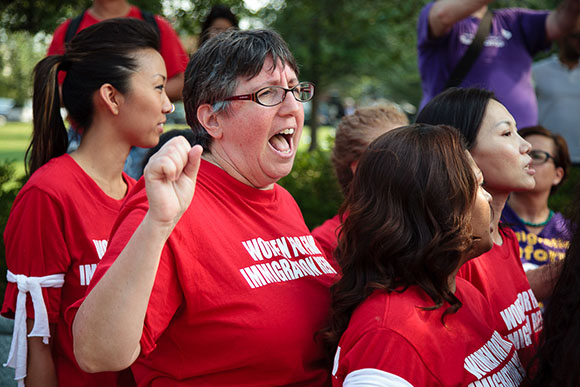 According to a report in the Jewish Week, Moshenberg was among 100 people arrested at an immigration reform demonstration at the U.S. Capitol building in Washington.

According to the report, Moshenberg said the mass arrests, part of a planned program of civil disobedience under the auspices of the We Belong Together: Women for Common Sense Immigration Reform organization, was designed to urge the House of Representatives to take action on comprehensive immigration legislation.

“As Jews, we have lived the immigrant experience in the not-so-distant past,” said Moshenberg. “NCJW remains committed to achieving a new immigration process that will keep families together and create a path to citizenship for immigrants currently living in the shadows in our communities.”

This pro-immigration policy of the NCJW is not unique: all major Jewish organizations have come out in favor of immigration reform, all part of their divide and conquer strategy to transform America and other nations into multi-cultural polyglots over which they can rule uncontested.

This is the same strategy used effectively in many Arab nations in the Middle East—where Zionist Supremacists do all they can to stoke up ethnic tensions in order to prevent a united front from being formed against Israel.

The most recent example of this came this week with the NCJW “sit in” in Washington, and a formal letter from 1300 Jewish clergy from all denominations to the U.S. Congress requesting immediate action on immigration reform.

““During this Jewish High Holy Day period, we assess individually and as a community our strengths and shortcomings and commit ourselves to doing better in the future. It is in this spirit that we write urging Congress to address the shortcomings of the past and strive to do better in swiftly passing comprehensive immigration reform….” the letter says.

This pro-immigration policy for America and other nations is in complete contrast to the immigration policies which these same Jewish Supremacists support for Israel. That Zionist state even recently began using DNA tests to screen potential immigrants in order to ensure that they carry Jewish genes!

This staggering hypocrisy on immigration policies sums up the Jewish Supremacist mindset—one rule for Jews, another for non-Jews.

The reality is that all people have a right to be free from foreign domination and oppression—from Africa to the Amazon, from Europe to Asia—and it is only the Jewish Supremacists who seek to force all peoples into conflict with one another while retaining their racially homogenous state.