Pre-commentary by Dr. David Duke — The following article by the Irish Savant Blogspot touched me deeply. As most of the readers of DavidDuke.com know, I consider the moments I spent in the company of Aleksandr Solzhenitsyn in Moscow some of most important of my life.

His words in a conversation with me now grace the beginning of my book, The Secret Behind Communism. For daring to name the invaders of Russia who committed the greatest mass murder and human rights crimes in the history of humanity, his name and imagine have dropped beneath the surface of the Ziomedia’s murky waters.

In truth, the process started long before his book, Two Hundred Years Together, which is probably his most important book yet still is not permitted to be published by a major publisher in the world’s most spoken language, English.

Of course, that’s because it is not the English who dominate the worldwide, English-speaking media , but the same pedigree who murdered and tortured Russia, Ukraine and much of Europe, and who have orchestrated much of the same in Palestine, Syria, Afghanistan, Iraq, Lebanon, and who spawn similar hateful plans for Iran.

Ironically, in doing my research for my new book, The Illustrated Protocols of Zion, I read, actually I should say devoured — a book  by one of the world’s premier Jewish historians, Martin Gilbert, who has specialized on two subjects: Israel and Winston Churchill. He has been, in fact, been knighted as the Britain’s official Biographer of Churchill.

In his tome of Jewish triumphalism, Churchill and the Jews, Gilbert essentially tells us how

Lord Rothschild and other powerful Zionists turned Churchill into what spy agencies regularly refer to as an “asset.”

In his book, which I quote in The Illustrated Protocols, he points out that Churchill’s famous article called Zionism vs. Communism was entirely correct in pointing out that, as Churchill said in the article, the Jews had indeed took over Russia through their handmaiden of the Communist Party.

Churchill describes the Jews and their terror as having “gripped the Russian people by their hair of their heads and become the undisputed masters of this enormous empire.”

Gilbert recounts Churchill’s Jewish takeover with not a word of rebuttal and actually goes so far as to correct Churchill when his article said that Lenin was the only Gentile involved in the top echelon. Martin sets the record straight that Lenin too had some clearly undeniable lines of Jewish descent. From Churchill and The Jews by Martin Gilbert in which he frankly admits that Jews, not Russians, composed almost the entire central leadership of the Bolshevik Movement.  It certainly wasn’t a “Russian”  revolution.

“In his determination to see Bolshevism crushed in Russia, Churchill studied the nature and organisation of the Bolshevik government in Moscow. He was familiar with the names and origins of all its leaders: Lenin was almost the only member of the Central Committee who was not of Jewish origin. Neither Churchill nor his colleagues, nor the Jews, knew that Lenin’s paternal grandfather was a Jew.”

The reason I mention Gilbert is that he thus has the same view on the Jewish role in Bolshevism as Solzhenitsyn did.

However, Gilbert, has not disappeared. Solzhenitsyn though, for essentially sharing sharing the same view as Gilbert, now flies under the radar of the Zio media.

The same lack of disappearance can be noted for the very Jewish historian, Yuri Sleskine, in his boastful tome of Jewish mastery of the world in the 20th century, matter-of-factly points out the  preeminent Jewish role in the Soviet murder apparatus.

You see, Gentiles cannot even mention the same things of which Jews Boast. And now you know the story behind the story of the disappearance of of Aleksandr Solzhenitsyn. — Dr. Duke

Of course you all know of Aleksandr Solzhenitsyn. Who doesn’t? Legendary Russian dissident during the Soviet era, prisoner in the gulags, starved, tortured, ostracized. But never broken. He spoke truth to power like few have ever done. His novels such as The Gulag Archipelago, The First Circle and Cancer 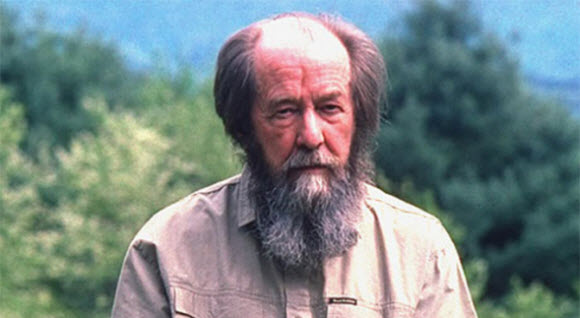 Ward were not only brilliant literature but offered the rarest of insights into the life of a dissident in the USSR. He came to be regarded as one of the most eminent writers and philosophers of his age. Which contributed to his being awarded the Nobel Prize for Literature in 1970 “for the ethical force with which he has pursued the indispensable traditions of Russian literature”.

Feted wherever he went, his books became international best sellers, translated into dozens of languages, the world was at his feet. Then almost overnight it all stopped. He became a non-person. The transformation was virtually unprecedented in the field of literature. Why did this happen? Because Alex stepped on the Third Rail. Well he didn’t so much step on it, rather dived on it full length. You see he wrote a book called 200 Years Together that traced the Jews’ colourful relationship with the Russian people and especially their role in the Bolshevik Revolution and its ensuing murderous tyranny.

He didn’t pull his punches. He placed Soviet Jews centre place in perpetrating the worst mass murders of the 20th century. While acknowledging that some Jews also suffered under this tyranny he clarified that it was not as Jews per se, rather that they were in the wrong faction at the wrong time. Solzhenitsyn’s own estimate for the number of Christians (his word) who died was 60 million.

He documented all of this in meticulous detail…. names, dates, times. But he did something else, something more insidious and dangerous. Something that had strategic international consequences for the Tribe. For a start he shone a light on the extraordinary Jewish capacity to magic themselves into the position of victim hood irrespective of their actual accountability. This in turn depended on – as he pointedly noted – their uncanny ability to seize control of media outlets. “There are pages of this history which one does not open without trembling. And these are the pages that are systematically and purposefully eradicated from the consciousness of the Jews.”

Other observations that cut to the bone included their practice of manipulating the legal framework to reflect Jewish interests. (Think “hate” legislation.) “Russian people are now confronted by a Jew both as their judge and hangman. Why was it that anyone who had the misfortune to fall into the hands of the Cheka could count with high probability on standing before a Jewish investigator or being shot by a Jew?” He meticulously debunked Jewish writers who sought to portray Soviet Jews as having no choice in what they did. ‘Just following orders’ How ironic is that? He carefully traces the ways in which Jews, both within the USSR and internationally, favoured and supported Jewish interests under the cloak of universalistic altruism.

I haven’t even begun to describe what he wrote in ‘200 Years Together’ not least because I haven’t read it, only certain chapters. So why have I not read it? Aha, therein lies a tale! You see, Solzhenitsyn’s legendary status and guarantee of vast sales would in normal circumstances have had international publishers slavering at the prospect of getting their hands on the rights. But none did. None wanted it. It was never published in the West. In fact, incredible as it seems it has never been formally translated into English! Given that English translations exist for almost every half-assed writing in the most obscure of languages the disappearance of 200 Years Together is mind-blowing. The author himself became a non-person just as he had in the USSR.

Read available translation of 200 years together

Think about it. It is, as I said, mind-blowing. What sort of pressure could have resulted in every Western publishing house, every Western TV company, every Western magazine being being intimidated into passing up such a unique and hugely profitable publishing coup? How exactly was this Jewish power exercised? Was it overt, subtle, physical, financial….or what?

It truly is frightening.

Is it any wonder that the American armed forces were afraid of commemorating the attack on the USS Liberty? Or that the country’s so-called legislators should prostrate themselves before their true rulers in the sight of all?

For those of you who want to learn the documented truth about the world’s greatest Holocaust — read my book, The Secret Behind Communism— and watch these videos. One is an illustrated video of the powerful introductory chapter of the book, and the second video shows how Jews in major Zionist media admit their leading role in this mass murder, but the Jewish press in America keeps this secret hidden from you.

These videos also should show you the importance of my videos, channel and work! The Zio fanatics are trying to wipe out my YouTube Channel and videos. Make a gift to help me fight to keep my videos going out to the world… thanks!

LINK TO HELP Dr. Duke’s work and FIGHT to KEEP HIS VIDEOS UP! and New videos to be made!