Commentary — The following article from the Weekly Standard, which might as well be called Neocon Central, gleefully reports on the squabble between Scott Walker, who is willing to attack Iran on his inauguration day, and Jeb Bush, who contends that the attack would be more effective if some preparation was put into it. This is further evidence that Jewish money rules our election system.

Ames, Iowa
A smoldering policy dispute over the Iran deal between two frontrunners for the Republican nomination caught fire over the weekend, as the campaigns of Wisconsin governor Scott Walker and former Florida governor Jeb Bush traded accusations of bad faith and the candidates themselves engaged in a pointed back-and-forth about how a newly elected president should handle the deal. 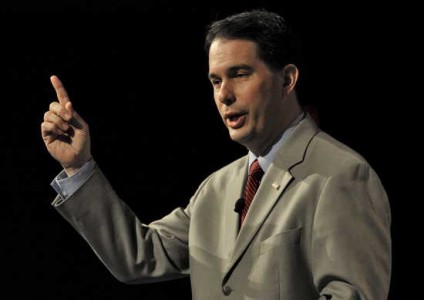 Speaking to reporters here Saturday after an appearance at the Family Leadership Summit, Walker said the next president will need to be prepared to take aggressive action against Iran, “very possibly” including military strikes, on the day he or she is inaugurated, and said he would not be comfortable with a commander in chief who is unwilling to act aggressively on day one of a new presidency. In his announcement speech at the beginning of the week, Walker had promised to ‘terminate’ the Iran deal on day one of his presidency, and Bush, at a town hall four days later, said ending the deal on the first day of a new administration was unrealistic and suggested that promises to do so, while politically appealing, reflected a lack of seriousness

Walker advisers suggested Bush was softening his opposition to the deal, claims that the Bush campaign denied. “They are purposefully misrepresenting his view,” says one Bush adviser. And Bush, in a statement to THE WEEKLY STANDARD Sunday night, called the agreement a “terrible deal” and said if elected president he “would begin immediately to responsibly get us out of this deal.” 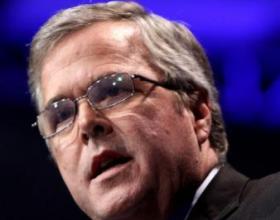 The clash comes at the end of Walker’s first week in the race and as the campaigns are ramping up preparations for the first Republican debate in Cleveland, Ohio, on August 6. It reveals some cracks in what had been a largely united Republican response to the deal, with even Senator Rand Paul denouncing the deal.

The dispute started July 17, when Bush responded to a question at a town hall in Carson City, Nevada. A voter asked Bush to explain the differences between the Obama administration’s handling of Iran and his own, had he been president. Bush gave an exhaustive and highly critical assessment of Obama’s failings and offered, at the end, a promise of sorts. “One thing that I won’t do is just say, as a candidate, ‘I’m going to tear up the agreement on the first day.’ That’s great, that sounds great but maybe you ought to check in with your allies first, maybe you ought to appoint a secretary of state, maybe secretary of defense, you might want to have your team in place, before you take an act like that.”

The comment was a not-so-subtle shot at Walker, who, in his announcement speech four days earlier had said he would “terminate the bad deal with Iran on the very first day in office, put in place crippling sanctions and convince our allies to do the same.”

At a press availability after the town hall, a reporter asked Bush why he would not “say what some of your competitors have, that you’re going to get rid of the agreement.” Bush responded: “Of course not. Because on 12:01 on January, whatever it is, 19th, I will not probably have a confirmed secretary of state, unlikely, won’t have a national security team in place. I would not have consulted with our allies. I would not have had the intelligence briefings to make decisions. If you’re running for president, you know, I think it’s important to be mature and thoughtful about this.”

The following day, Michael Doran, a former National Security Council official and a well-regarded scholar at the Hudson Institute who has been briefing Walker and is close to his team, tweeted a link to a Politico article about Bush’s comments and wrote: “Jeb Bush is caving on Iran already – won’t commit to rolling back Obama’s Iran deal.”  The same day, the Walker campaign released a statement Robert O’Brien, a national security adviser to the governor and former U.S. Representative to the United Nations. O’Brien declared that the next president must end the deal on “day one” and, without naming him, offered a rebuke of Bush. “We don’t need more information, we don’t need to wait to confirm the next Secretary of State, we need decisive leadership and we need it now.”

At a press conference after his appearance at the Family Leadership Summit here Saturday, Walker was asked if he thinks Bush is wrong. “He may have his opinion. I believe that a president shouldn’t wait to act until they put a cabinet together or an extended period of time,” Walker said. “I believe they should be prepared to act on the very first day they take office. It’s very possible – God forbid, but it’s very possible – that the next president could be called to take aggressive actions, including military action, on the first day in office. And I don’t want a president who is not prepared to act on day one. So, as far as me, as far as my position, I’m going to be prepared to be president on day one.”

Bush came out strongly against the deal when it was announced. In a statement he called the deal “dangerous, deeply flawed and short-sighted.” He concluded: “This isn’t diplomacy – it is appeasement.” His condemnation did not include a call for the deal to be withdrawn in a new administration.

“I have great respect for Governor Bush, but he’s just wrong on this,” says former Senator James Talent, a top national security adviser to Walker. “His position [on ‘day one’] doesn’t reflect the logical consistency of his position on the agreement.” If the agreement itself is appeasement, Talent asks, then why not work to get rid of it right away? “There’s an inconsistency there.”

Walker believes that even if the process of unraveling the deal is long and complicated, it’s important to begin immediately up taking office. And he believes that announcing his intentions in advance will put the Iranian regime on notice that the deal they’re celebrating today may not last. There is concern among Walker advisers that by refusing to say he’d work to reverse the deal on day one, Bush is adding to the sense among foreign policy thinkers that the deal cannot be undone, even partially. This undercuts Republicans in Congress, they say, who are now preparing to fight to roll the deal back, at least in the limited way that Congress can affect it.

Skeptics of Walker’s argument say it’s not only impractical to end the deal abruptly with a new president, but it may not be desirable. By January 2017, they argue, Iran will have earned many of the most significant benefits of the agreement – substantial sanctions relief, preservation of its nuclear infrastructure, international approbation as a member of the community of nations. Ending the deal, the argument goes, will relieve the Iranian regime of any obligation to abide by its terms and allow them to accelerate the pace of their march toward a bomb. The beginning of a new administration provides an opportunity to huddle with allies to assess the implementation of the deal and Iranian behavior more broadly. Then, without being restrained by political promises from the campaign, it will be possible to come up with a plan to contain Iran and discourage its regional ambitions.

“I have repeatedly said is a terrible deal. Congress should reject it and it would be best to do so before Iran is given more than $100 billion in sanctions relief that they can use to further destabilize the region,” Bush said in a statement to THE WEEKLY STANDARD. “Should it be upheld, as President I would begin immediately to responsibly get us out of this deal, with a comprehensive strategy that is responsive to the conditions at the time and confronts Iran’s continued pursuit of a nuclear weapons capability, its support for terrorism and instability, its ballistic missile proliferation, and its horrific human rights record.”

He continued: “Such a strategy will require a new national security team that is committed to rebuilding our defenses and restoring our alliances, starting with our relationship with Israel.  It will require sustained diplomatic efforts to put significant financial, diplomatic, and military pressure on Iran to change its behavior.  And because of the massive sanctions relief provided by this terrible deal, the impact of unilateral U.S. sanctions will be limited and it will be important to work with our allies to reimpose multilateral sanctions and pressure.”

An adviser to Bush elaborated a bit on the potential complications of the “day one” approach.

“This is a complicated engagement and depending on how the world looks in January of 2017, there will likely be a multi-faceted response required to dealing with Iran – including starting to entangle us from this deal,” says a Bush adviser. “Promising to do so ‘day one’ – regardless of support from allies, without a full strategy in place, with Obama staffers implementing it, and without knowing the facts that will face the next president – isn’t realistic.”

Talent doesn’t buy it. “I think it is doable,” he says. “The question is: Is it a wise think to do? I think it is, as Governor Walker said, especially to send a signal to the region” that the new administration will be bringing “a very different kind of leadership.” Talent says much of the preparation for these inauguration-day changes can be handled before the new administration even takes office. “That’s what you do in a transition. Presidents sign these kinds of orders on the first day all the time.”

Bush is incorrect in his claim that he “would not have had the intelligence briefings to make decisions.” In fact, such briefings begin even before the general election, with the nominees of the major parties being eligible for high-level briefings once they are formally nominated. In 2012, Mitt Romney and Paul Ryan started attending regular sessions with U.S. intelligence officials in early September. The frequency and detail of those briefings increases after the presidential election has been decided.

How to handle the Iran deal is one of the most consequential foreign policy decisions the next president will make, and the other Republican candidates will be asked to lay out their approach to unraveling the deal in the coming days.