Precommentary by Dr. Patrick Slattery — I would tend not to speak ill of the recently departed, but Robert Fisk makes a compelling case that the truth must be told, regardless of sensitivities, otherwise it may wind up being forever flushed down the memory hole. Fisk, the best-known Western journalist in the Middle East, has lived in Beirut for decades and can tell the story of Sharon’s devastating impact on the region perhaps like no one else.

He was respected in his eight years of near-death, with no sacrilegious cartoons to damage his reputation; and he will, be assured, receive the funeral of a hero and a peacemaker. Thus do we remake history. 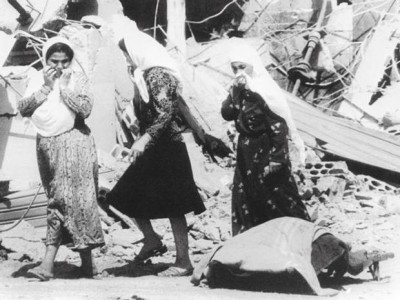 Any other Middle Eastern leader who survived eight years in a coma would have been the butt of every cartoonist in the world. Hafez el-Assad would have appeared in his death bed, ordering his son to commit massacres; Khomeini would have been pictured demanding more executions as his life was endlessly prolonged. But of Sharon – the butcher of Sabra and Shatila for almost every Palestinian – there has been an almost sacred silence.

Cursed in life as a killer by quite a few Israeli soldiers as well as by the Arab world – which has proved pretty efficient at slaughtering its own people these past few years – Sharon was respected in his eight years of near-death, no sacrilegious cartoons to damage his reputation; and he will, be assured, receive the funeral of a hero and a peacemaker.

Thus do we remake history. How speedily did toady journalists in Washington and New York patch up this brutal man’s image. After sending his army’s pet Lebanese militia into the Sabra and Shatila refugee camps in 1982, where they massacred up to 1,700 Palestinians, Israel’s own official enquiry announced that Sharon bore “personal” responsibility for the bloodbath.