Patrick Slattery — On Saturday, August 12, I ventured behind enemy lines in Charlottesville on special assignment from the Daily Stormer. What I found was a weird mix of black racism, white self-delusion, degeneracy and cuckoldry the likes of which, frankly, the world has never seen before.

I am new to photo journalism, and not particularly well suited to it, so I apologize for poor angles and composition and for missing so much of what was going on around me. The “intolerance will not be tolerated” banner could be the basis for great memes about these people’s complete lack of any sense of irony.

After having aided in the logistics of securing transportation for our people leaving MacIntyre Park, I returned to the Lee Square vicinity around 2PM. A couple blocks down the street I found Justice Park to be occupied by a heavily armed group. The fact that the police standing nearby were not trying to get them to disperse was clear indication that they were NOT one of the Alt-right pro-white groups. A journalists I spoke to later told me that he had interviewed people from the group and that they were Three Percenters. I have no way of verifying this. But I do think that to have any group show up armed with AR-15 semiautomatic rifles makes it more likely that other groups will escalate their arsenals at the next event, which could lead to a bloodbath. 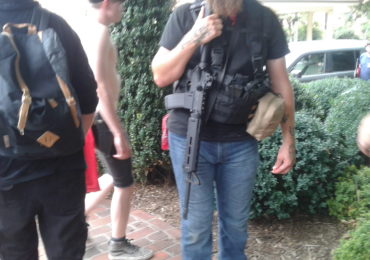 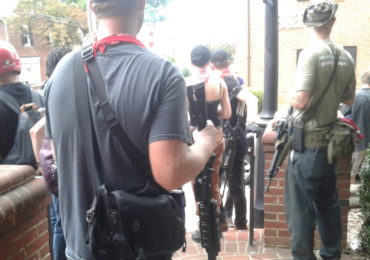 I then started feeling very unwelcome in the little park with the heavily armed people who ordered me to put away my phone. Isolated, I hardly felt it was the time or place to argue what right they had to infringe on my constitutional rights, so I move a couple blocks south, which was the scene of the car crash.

I saw a older black woman stretched out in a bus shelter. I had not yet heard about the car crash, so I just assumed that she was overcome by the heat, but she must of been one of the injured from the car crash. A white clergyman with a “Black Lives Matter” button pinned to his robe was trying to call the medics.

One point of interest was that the white BLM protesters were periodically harassed by ghetto blacks who didn’t seem to understand or care what the sides were in this conflict. Just after I shot the above video a colored gentleman informed the mostly white Black Lives Matter supporters that he had spent 13 years as a Marine sniper in Iraq and was pissed at all of us for this shit. For the benefit of the hard of hearing and retarded among us (and I fear the latter group was particularly over-represented), he repeated this public service announcement several times at the top of his lungs.

Below you can see the polices line blocking the crash scene at Water and 2nd Streets: 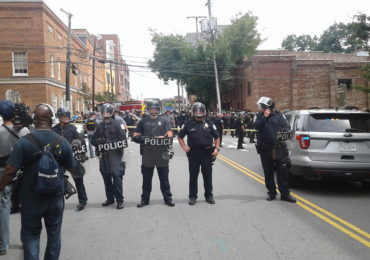 And here are the Black Lives Matter crackers defiantly calling for the overthrow of the constitutionally elected American government. No wonder Governor McAullife said they had no place in his state. Wait, this just in… It was actually the people wanted to peacefully assemble after having received a permit from the city and were then violently attacked who the governor demanded leave. The people demanding a communist revolution are welcome. 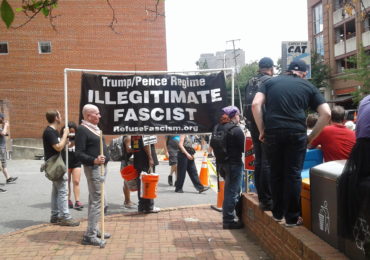 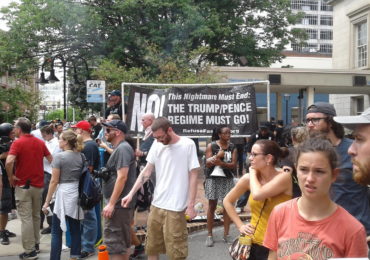 I then walked around the block. Multiple times blacks from the adjoining culturally enriched housing project (hereafter referred to as “the local gentry”) drove by in cars or marched past on foot shouting threats like “Fuckin’ bitch cracker, I’m coming back for you.” One white women responded approvingly with a black power fist salute. New levels of cuckoldry previously believed unattainable have been achieved.

Meanwhile, up the street, the local gentry treated a line of state troopers to a traditional tribal dance and taunt.

Sexually marginalized communities were well-represented, and they came with a message. 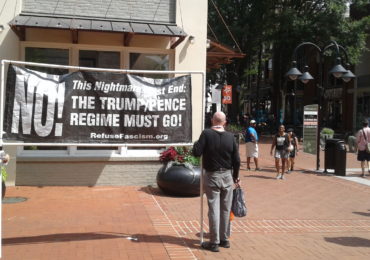 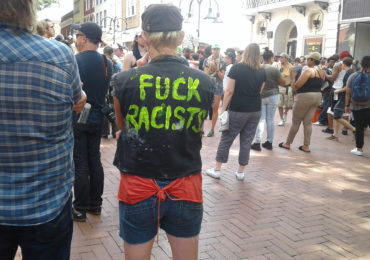 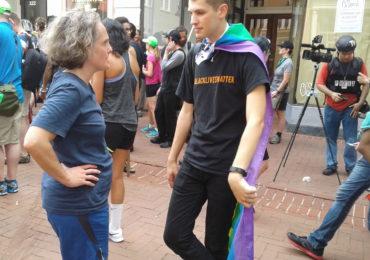 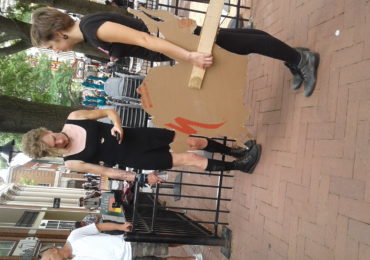 And of course what assembly of diversity could be complete without G-d’s chosen. 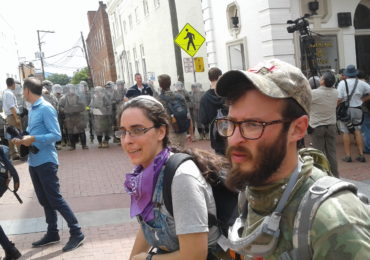 Hey Woodstock, close your time/space portal, do ya mind? 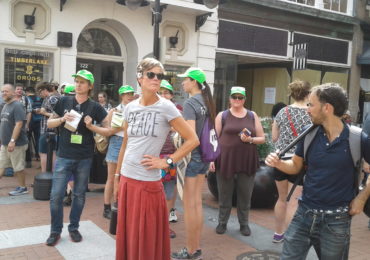 Apparently in all the commotion the barn door at the University of Virginia’s School of Animal Husbandry was left ajar, much to the bemusement of the local gentry. 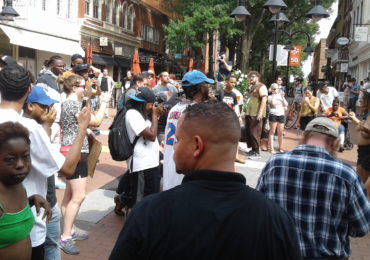 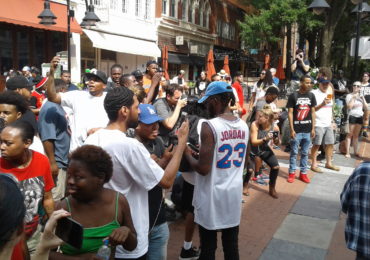 This is presumably the helicopter that crashed.

And here is a Communist lady calling for revolution at Charlottesville Counter-demonstration. Her oratory about a fucking fascist regime in the White House that’s unleashing white supremacy is truly inspiring.

I would like to joke that a fun day was had by all, but of course it wasn’t. Three people are dead and dozens were injured. A big hunk of the powers that be (Governor McAullife, the Zio-media, etc.) have made it clear in no uncertain terms that white people do NOT have the right to peaceably to assemble or to petition the Government for a redress of grievances, as is guaranteed by the First Amendment to the Constitution. We do not have right to voice ethnic interests, unlike every other racial or ethnic group in this country. And what future do they plan for this country? Well, just look at the pictures above.

At least Donald Trump refuses to single us out for condemnation. We will have to see how this all plays out.

Next Post A few Zio-media headlines regarding Dr. Duke’s appearance in Charlottesville