Precommentary — The following article does a great job of exposing Ted Cruz close ties both to the Bush family and to Goldman Sachs, making this supposed “outsider” the ultimate Washington/Wall Street insider. The author, Roger Stone, is a powerful political writer and analyst. All of the facts presented are easily verified from credible sources with a Google search.

Who Is The Real Ted Cruz?

10:53 AM 01/26/2016Vladimir Lenin said, “There are no morals in politics; there is only expedience. A scoundrel may be of use to us just because he is a scoundrel.”

I can’t think of a better description of Ted Cruz’s relationship with the DC-Wall Street Establishment – Cruz being the scoundrel of course. Cruz’s claim of not being a tool of the political elite is like Bill Clinton telling the world, “I did not have sexual relations with that woman.”

Webster’s definition of a scoundrel is a dishonest or unscrupulous person, and Cruz has become quite adroit at saying one thing while his history shows him doing the other. Rather than the outsider he claims to be, Ted Cruz is the ultimate insider, former top Bush 41 policy aide and globalist, Ivy Leaguer, and establishment insider.

Not many conservatives coming out of Princeton and Harvard. “I’m just sayin,’” Ted, as said in the debate. 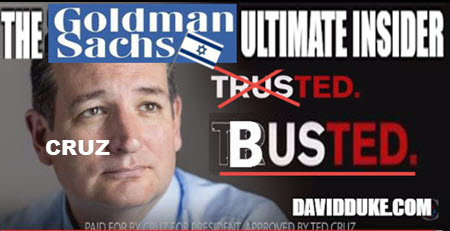 There is no better example of this than Calgary Ted’s actions surrounding the big Wall Street banks and their secret funding of his political ascension. Cruz has been gorging at the table of the ultimate insider of all insiders – Goldman Sachs and Citibank .

You may recall in a recent Fox Business Network debate that Cruz, in Mr. Haney from Green Acres voice, declared to one of the moderators, “The opening question [moderator Jerry Seib] asked — would you bailout the big banks again — nobody gave you an answer to that. I will give you an answer — absolutely not.”

What else would you expect a scoundrel to say who had secretly secured big sweetheart loans from Goldman and Citibank — by leveraging his retirement accounts –– to fund his 2012 U.S. Senate campaign. Loans which the Calgary Ted conveniently forgot to disclose to the Federal Election Commission. These are the very retirement accounts that he said he and his wife said he cashed in to fund his senate race. In other words, Ted lied.

At the same time Ted’s bulging 2016 campaign accounts and supporting Super-PACs are stuffed with big oil and gas money. He knows how to play the game.

And perhaps the ultimate hypocrisy of the native born Canadian is that his spouse, Heidi, by all accounts a lovely wife and mother, has been employed by Goldman Sachs since 2005. She is on leave as managing director and regional head of private wealth management. Heidi is a proud member of the lefty Council on Foreign Relations, advocates of one world government and the New World Order.

Heidi is not a bit player in the Cruz campaign with those credentials but rather an integral part of the campaign’s fundraising efforts. As reported by CNN last year, “She works the phones the way she worked them when she was at Goldman,” said Chad Sweet, the Cruz campaign’s chairman, who recruited Heidi to work at the giant investment bank.”

Yet we are to believe that the big Wall Street banks have no leverage over Ted Cruz? Why didn’t Heidi Cruz resign from Goldman Sachs instead of taking a leave of absence? That’s like saying Bill Ayers and Saul Alinsky have had no influence on Barack Obama.

The other inside connection that hits one like a baseball bat is the Bush connection.

Ted was George W.’s brain when he ran for President. A top policy adviser. Ted maneuvered for Solicitor General in Bush World but settled for a plum at the Federal Trade Commission. Ted’s a Bushman with deep ties to the political and financial establishment.

Ted and Heidi brag about being the first “Bush marriage” – they met as Bush staffers which ultimately led to marriage. Cruz was an adviser on legal affairs while Heidi was an adviser on economic policy and eventually director for the Western Hemisphere on the National Security Council under Condoleezza Rice. Condi helped give us the phony war in Iraq.

Also conveniently missing from Heidi’s Wikipedia bio is her service as Deputy U.S. Trade Representative to USTR head Robert Zoellick. At USTR Heidi worked on U.S.-China trade policy- the one Donald Trump talks about so much.

And Chad Sweet, Ted Cruz’s campaign chairman, is a former CIA officer. Michael Chertoff, George W. Bush’s former Secretary of Homeland Security, hired Sweet from Goldman Sachs to restructure and optimize the flow of information between the CIA, FBI and other members of the national security community and DHS. Chertoff and Sweet co-founded the Chertoff Group upon leaving the administration.

A known tactic of the intelligence community is the use of strategic communications as a “soft power” weapon against it adversaries — the creation of false narratives by the effective use of all media — social, digital, newspaper, print, etc. Combined with denial and deception, it can be a potent force. Glenn Beck and Mark Levin are abetting this.

Despite his ability to lie with a straight face (sadly Nixonian) on his support for amnesty and TPP, he got nailed by Senator Marco Rubio on the debate. Acting like a prick in the U.S. Senate was the core of Ted’s disciplined effort to bury his old school ties and reinvent himself as a modern-day Jesse Helms and supposed Conservative outsider. It’s a ruse.

As we get closer to the Iowa Caucus and New Hampshire Primary, Cruz and his establishment puppet masters are engaged in an aggressive strategy against Trump. The false narrative of course being that Cruz is the outsider while Trump is the insider. Nothing could be farther from the truth.

In its most simplistic terms – the power elite have no leverage over Trump – nothing.

Cruz, on the other hand, is the establishments quisling, spawned by the Bushes and controlled by Wall Street, who became a strident “outsider” only four years ago.

The U.S. Constitution does not defined “native born” citizen, nor have the courts. That Ted was eligible  to run for office as a citizen only 15 months ago is weird. Trump’s right the Democrats would have a field day with Calgary Ted, the Manchurian, Canadian Candidate.

Don’t get me wrong. Ted Cruz is a smart, canny, talented guy who has run a great “long race” campaign. He aspires to be Reagan but trust me he’s Nixon. Right down the incredible discipline and smarts playing the political game. Ted Cruz is not who he appears to be. As the bible says, “Beware of false prophets, who come to you in the clothing of sheep, but inwardly they are ravening wolves.” In this case we must beware a Canadian bearing gifts.

Previous Post In Obama nominates Jew Merrick Garland to Supreme Court. Who would have guessed?!