By Dr. Patrick Slattery — Once again, my apologies to Professor Stephen F. Cohen. I know it doesn’t do him any favor to be quoted on DavidDuke.com, but our readers need to hear these thoughts expressed by a high-profile Princeton University Professor Emeritus. On his June 20 radio broadcast on the John Batchelor Show, he went into great detail about the aggressive and provocative military moves made by the United States against Russia, and tied Mrs. Clinton to those in the State and Defense Departments pushing Russia to the brink. When asked by John Batchelor whether this was going to help her get elected in November, Cohen stated to following:

“It gives her an advantage unless two things happen. One is, having grown up in Kentucky and in Indiana, I have great faith that a lot of American folks see through this. So we will see what Americans make of it. And the other thing is the media has silenced Trump, the only one who’s opposed to this. Now he may be loathsome in every other imaginable way, but on the question of a new Cold War, he has taken a firm stand, and the stands he takes are either silenced or derided. So, if Trump were unleashed and given a fair chance to say what he thinks about foreign policy that would provide an alternative. Because democracy is about providing alternatives. And if the people listen, I am not so sure that Mrs. Clinton will win.” (The full interview can be heard here.)

As I have been saying on the David Duke Show, there are lots of people who are not from traditional Republican backgrounds who are very upset by Clinton’s warmongering. If foreign policy comes to the forefront of the election, Hillary loses. Trump doesn’t need to rattle sabers to look like a tough guy. Toughness is already his brand. and there is no way that progressives, given an viable alternative, are going to rally around someone recklessly pushing us into nuclear Armageddon. 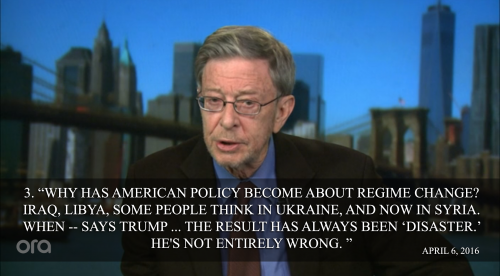 Next Post Dr. Duke talks with and honors Mark Collet and all British Patriots who Won Brexit! Smash the EU and SAVE EUROPE!