It exposes the sick self-hatred in European beta men and radical feminist women around the world, as well as the despicable treason by the political whores of the Zio-globalist media, political power and finance.

You will see sick Zio-Sycophants like Angela Merkel who are facilitating genocide against our people. But Merkel and the others sickos in this vicious soul-destroying war against European mankind and the product of the Jewish supremacists who dominate the Global media and have poisoned millions of European minds and hearts. 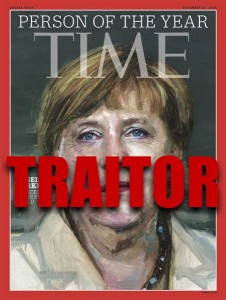 While you watch this video consider that the Zio-Media Elephant in the room that of which is not spoken.

It is the non-European origin- Zio bosses of the Entertainment and News media that have poisoned our people to  become self-hating. It is the Jewish-dominated – Hollywood-NY- Globalist media which is behind the poisoning our people.

In addition, the disproportionate Jewish political power that rules the United States also influences many politicians throughout the Western World because they they can use American political, financial and military power as a wedge in their global Zio-orchestrated hatred of European mankind.

Merkel just today sent a new nuclear weapons capable submarine to Israel, a nation that has Jewish officials who have threatened to use nuclear bombs against Europe. (See the Samson Option on www.DavidDuke.com)

Knowing this fact should help you understand who is behind the  the genocide of Europeans in every Western nation.

Listen to the David Duke Today discussing these matters

Important Note:
I know that there are significant numbers of Muslims around the world who are appalled by the mass rape and attacks in Cologne and they rightly know that such savagery casts a pall on all Muslims everywhere. Every Muslim should condemn the invasion of Europe and these atrocities in Cologne just as all true Europeans should condemn Israel’s Nakba against Palestine and the Zionist wars and dictated policies of America and the EU!

Next Post Friends of Hillary, by Professor Kevin MacDonald