Six Jewish extremists have been arrested in Israel for the burning-alive torture death of a Palestinian teen—but, unlike the (still not-arrested) alleged suspects in the earlier murders of the three Jewish teens, the Zionist state has not bulldozed their houses of those of their parents.

It is Israel’s declared and long-used policy to bulldoze the houses of parents of what it calls “terrorists” in retaliation for militant attacks on Israel. It was, for example, during one of these bulldozing “revenge” actions that the American peace activist, Corrie Rachel was murdered.

The Zionist state lost no time last week in blowing up the homes of the two Palestinians named as suspects in the abduction murder of the three Israeli teens. Israeli Defense Forces raided the homes of Amar Abu Aisha and Marwan Qawasmeh in the city of Hebron on Monday evening, June 30th into the morning of July 1st. 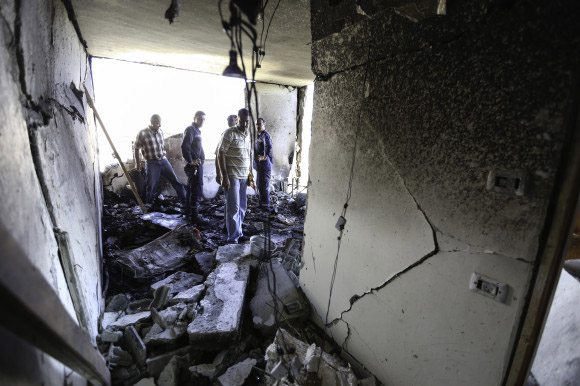 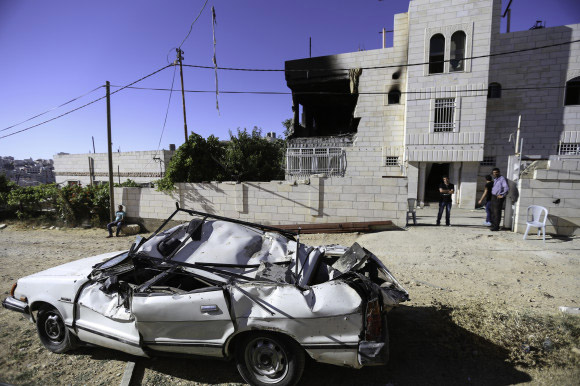 At approximately 12:00 am, soldiers set up explosives in both homes, detonating them after the families were evacuated. Israeli intelligence has accused both men of allegedly kidnapping the settler teens. The whereabouts of both men are unknown.

In addition, the IDF arrested Amar Abu Aisha’s father and two of his sons, none of whom have yet been released although there is no evidence whatsoever to link them to the incident.

The families and residences of the Jewish terrorists arrested for the murder of the Palestinian teen have, of course, not been subjected to the same state-authorized terrorism, showing clearly that Israeli policy follows the dictates of Rabbi Yaacov Perrin, who in 1994 announced that “One million Arabs are not worth a Jewish fingernail.” (NY Daily News, Feb. 28, 1994, p.6).

Further evidence of the blatant anti-Gentile nature of the Jewish state came with the announcement by its foreign minister, Avigdor Lieberman, who urged Israel’s justice system to punish rioters heavily as “an unequivocal message to those who enjoy Israeli citizenship yet act as terrorists.”

In a Facebook post Saturday, Lieberman said “events prove once more that these people do not belong in the State of Israel.” 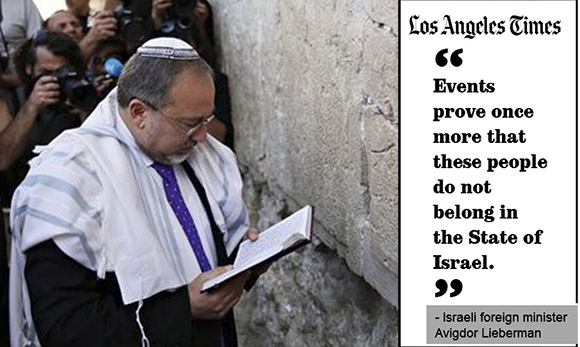 Liebermann, who has just split from Benjamin Netanyahu because the latter is “too soft,” recently commissioned a confidential legal opinion that argues it would be legal under international law to transfer all non-Jews out of Israel—and Arab-Israeli citizens in particular to “a new Palestinian state by shifting the border.”

The official Israeli foreign ministry document, leaked to press, makes clear that the proposal was commissioned to lay the legal groundwork for the so-called Lieberman plan–or “populated-area exchange plan” – which he first proposed in 2004.

In other words, Liebermann is for a  Palestinian state so long as Israel is a completely ethnically-pure racial state.

Lieberman also announced that he would not support the right to return of any Palestinian who had been driven off their land, saying “I will not support any peace deal that will allow the return of even one Palestinian refugee to Israel,” he said. “Because if we leave the right of return on the table, all pressure will be on this subject.”

Just like everything else in Israel, and the Jewish lobbies around the globe who support that state, there is one law for the Jews, and another for the hated Goyim.

Next Post What Are You First, Jew or Journalist?