This week’s unexpected defeat in a Republican Primary of Eric Cantor, described as the “poster boy” of Jewish Republicans, continues to fill the front pages of the media channels which Jewish Supremacists direct at their own tribe, and all are discussing whether their old whipping-boy: “anti-Semitism” is actually to blame.

The basis of their speculation is, as pointed out by Davidduke.com earlier this week, lies in the fact that, unlike many other elected Jewish public representatives in America, Cantor relied on an electorate that was overwhelmingly non-Jewish. Only a quarter of a percent of the voters in his district are Jews.

In other districts with far larger numbers of Jews—New York City, Los Angeles, or Florida, for example—when a Jew loses an election there is never any debate on whether the voters are “anti-Semitic” or not—the result is just treated as Jews voting for one candidate or another.

However, as soon as non-Jewish voters are involved, the paranoid Jewish Supremacist mind-set springs into action, and of course, seeks to blame the non-Jews for the election result. 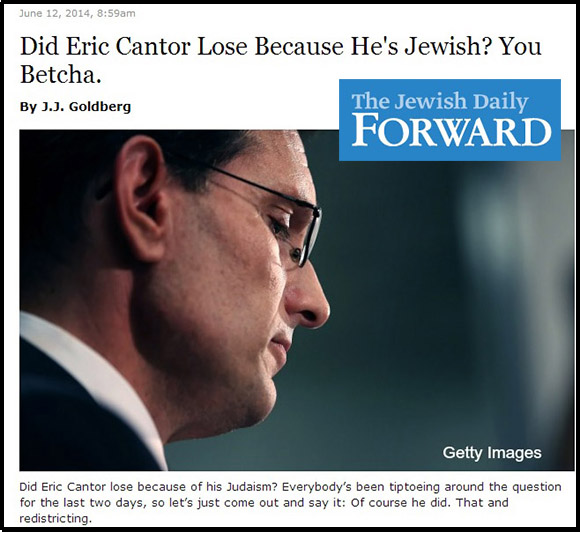 So for example, the Jewish journalist J. J. Goldberg, Editor-at-Large of the newspaper The Daily Forward, wrote in a piece in that paper titled “Did Eric Cantor Lose Because He’s Jewish? You Betcha” that:

Did Eric Cantor lose because of his Judaism? Everybody’s been tiptoeing around the question for the last two days, so let’s just come out and say it: Of course he did. That and redistricting.

The Virginia Republican leadership accidentally did him in by trying to build him a safer district. They took away some of the purple zones in Richmond and its suburbs and giving him some solid red countryside further north.

What the GOP’s redistricting mavens forgot to factor in — what’s eluded pretty much the entire chattering class wrestling with this earthquake — is that the prairie fire that’s turned so much of middle America red is as much about Christianity as anything else. And if it’s about Christianity, then it’s also about not-Jewish.

The main point is that one can be pro-Christian without being anti-Jewish. Practically speaking, Jews feel threatened by a political movement that seeks to put religion — the majority religion, which isn’t ours — at the center of the nation’s public life.

What Goldberg is saying here is that the reason why Cantor lost was because of the largely non-Jewish make-up of the electorate in his district.

The Times of Israel, the Israeli-based newspaper which specializes in discussing internal political matters in America because its editorial staff is plugged into the Jewish power structure which dominates the US—has also engaged in the ongoing Jewish navel-gazing to try and work out why the wicked Goyim voted out even a “conservative” Jew such as Cantor. 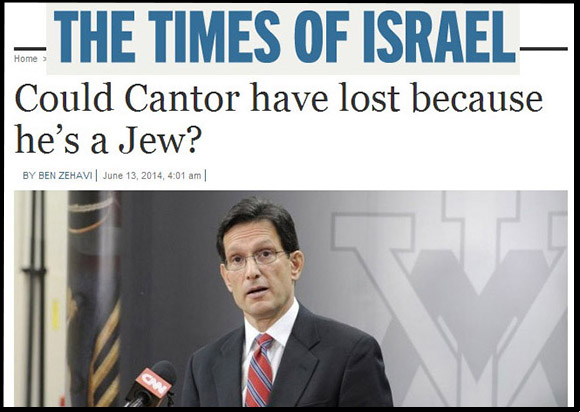 In an article titled “Could Cantor have lost because he’s a Jew?” the Israeli newspaper pointed out that of the “278 Republicans in the US House and Senate, 277 are Christian.”

Following this week’s astonishing primary defeat of the party’s only Jewish representative, US House Majority Leader Eric Cantor (R-VA), it’s a safe bet that the next Congress will include exactly zero non-Christian members of the GOP,” the Times of Israel continued.

(As an aside, the reader should ponder the truth that an American newspaper would hardly concern itself with debating how many non-Jews sit in the Knesset—or the parliament of any other nation—and that the Israeli and Jewish obsession with how many Jews sit in the US Congress reveals precisely how important this power base is to that foreign nation).

According to the Times of Israel, Tevi Troy, a prominent Jewish Republican who worked in the George W. Bush White House and served as deputy secretary of health and human services, said that Cantor’s defeat is a difficult pill to swallow for Jewish Republicans.

Eric Cantor is symbolically important to Jewish Republicans, since he is a high-ranking elected Jewish official. There have been many high-level appointed Jewish Republicans, at Cabinet agencies, on Congressional staffs, and at the White House, but elected ones have been harder to come by,” Tory said, inadvertently revealing the reality that most Jewish power brokers in Washington DC are appointed, and rarely actually elected.

The reality is that Cantor did lose because he was Jewish—because although masquerading as a “conservative”, he endorsed all the things which in America are regarded as “Jewish values”—pro-immigration, pro-big business (with you-know-who as the leaders of big business) and pro-amnesty.

It was the rejection of these “Jewish values” by the non-Jewish voters of his district which led to Cantor’s defeat, no matter which way the Jewish Supremacist “analysts” try to spin the result.

Even the Jewish Daily Forward has in effect admitted this, in another article by a prominent Jewish Republican Noam Neusner (who just “happened” to have been a speechwriter for President George W. Bush) titled “Why Eric Cantor’s Loss Will Hurt Jewish Democrats, Too.” 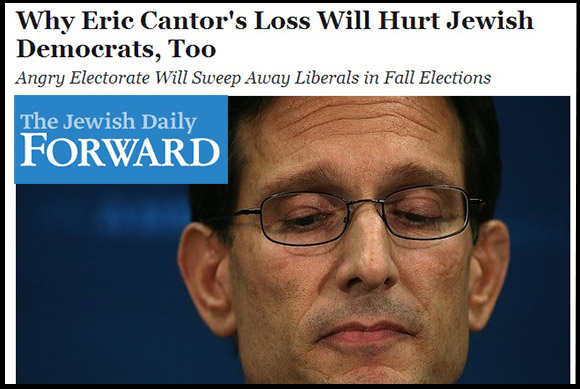 In this article, Neusner warned that the “gleeful air among liberal Jews about the political demise of Eric Cantor” is misplaced because it portends that an “angry electorate will sweep away liberals in [the upcoming] Fall elections.”

Neusner points out that the Cantor defeat is actually a defeat for the pro-immigration lobby—one of the cherished Jewish values (for America, not for Israel). As he wrote:

There can therefore be no doubt that Cantor lost his seat because he was Jewish and endorsed the “Jewish values”—which are now increasingly being rejected by middle-class America.

Jewish Supremacists who continue to debate the reasons for Cantor’s defeat would do well to stop blaming non-Jews—as is always their first reaction—and rather look at their own behavior as the primary motivating cause of political events.

Previous Post Hear Dr. David Duke on the Red Terror, Jewish Tribalism and the US Congress