There’s no argument, North Korea is obviously a repressive state. However, there is no short supply of oppressive states on planet Earth. In truth, there is no more oppressive, murderous, sate on Earth than Israel. It was founded on ethnic cleansing of hundreds of thousands of people who still to this day cannot return to the place of their birth. Israel has murdered and maimed tens of thousands of Palestinians, Lebanese and others, and it also tortured tens of thousands.

So, why is Israel honored by the Western governments and Media while N. Korea is on the front pages continuously? The Zio media will tell us that N. Korea must be opposed because it is a “Nuclear Rogue State.” But the real nuclear rogue state is right under Europe’s nose, it is Israel.

As far as nuclear weapons go, Israel, is a nuclear rogue state that will not join the Nuclear Non-proliferation Treaty, and will not allow any inspections of its biological, chemical and nuclear weapons. Last year the Zio media went ballistic, demanding the destruction of Syria’s chemical weapons while authorities agree that Israel has one of the biggest stockpiles of horrific chemical weapons on Earth — Yet, there was no demand by the Zio Media and the Zio-controlled governments of the West for Israel to destroy these banned weapons! 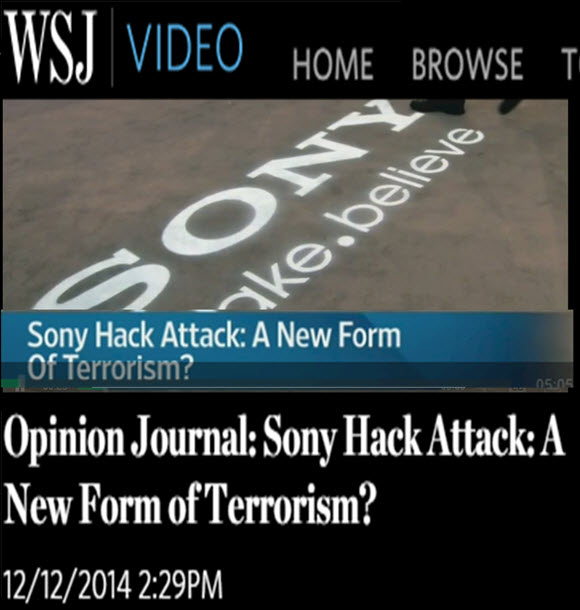 A perfect example of the Zionist Media treatment of North Korea is the alleged N. Korean hacking of the Zio Bosses at Sony. It is now being called “terrorism.” Well, of course it is. Jewish supremacist Marxists at the SPLC and ADL can gloat and used hacked material of their anti-Zionist opponents in America, but don’t worry, no one in the media will call it terrorism.

What the Zio controlled government and media are really concerned about is the fact that the hacked emails show exactly how the Jewish bosses at Sony and the other studios are the ultimate scumbags. Those who expose the Jewish bosses are terrorists, but Israel which just finished killing and maiming thousands of children and innocent civilians in Gaza, destroying tens of thousands of homes — they are not terrorists, but allies. Of course the media doesn’t even mention Israel’s terrorist attacks on America in the Lavon Affair, Attack on the USS Liberty and Israel’s spying and enormous loss of life caused by Jonathan Pollard.

So why all the focus on North Korea?

America’s continual focus and towards North Korea is not based on its human rights abuses but rather because that nation is an openly declared enemy of the state of Israel, and has long been identified by the Jewish Lobby as a target for destruction along with Iraq, Iran, and Syria, an investigation by the New Observer has concluded. 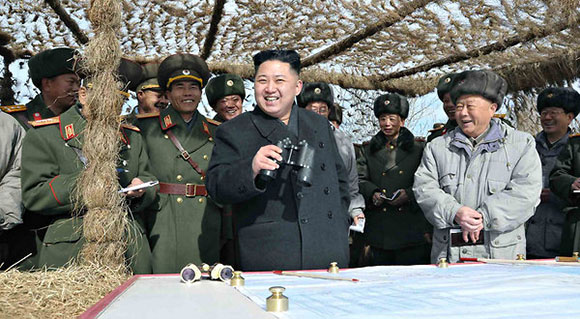 Relations with North Korea have reached a new low with the accusations that it was somehow responsible for the hacking of emails at the Sony Corporation—which among other things revealed emails from the Jewish film producer Scott Rudin to the equally Jewish Sony co-chairwoman, Amy Pascal, in which they discussed what type of black-themed movies Barack Obama would like.

The American government immediately accused North Korea of being responsible for the hacking—even though it borders on the absurd that any foreign government would want to hack Sony emails—and threatened to place North Korea back on its list of state sponsors of terrorism.

If, however, the American government was truly concerned about rogue governments, there are plenty of other regimes around the world who have far worse human rights records than North Korea.

The American government’s continuous hostility towards North Korea is based on the same reason as the US’s hostility towards Saddam Hussein in Iraq, Basheer Assad in Syria, and the Iranian state—namely, that all those nations are hostile to Israel.

As the Jewish Lobby dictates US foreign policy, North Korea’s ongoing hostility towards Israel has made it a target for aggression, in exactly the same way that Iraq, Iran, and Syria have been selected for violent American aggression.

North Korea has in fact been a long-standing opponent of Israel, and does not even recognize the Zionist state.

In 1998, North Korea formally granted recognition to what it called the State of Palestine which includes all of present-day Israeli-held territory.

Furthermore, North Korea has actively supplied armaments and technology to Israel’s enemies, including Iran, Syria, and the former government of Libya. 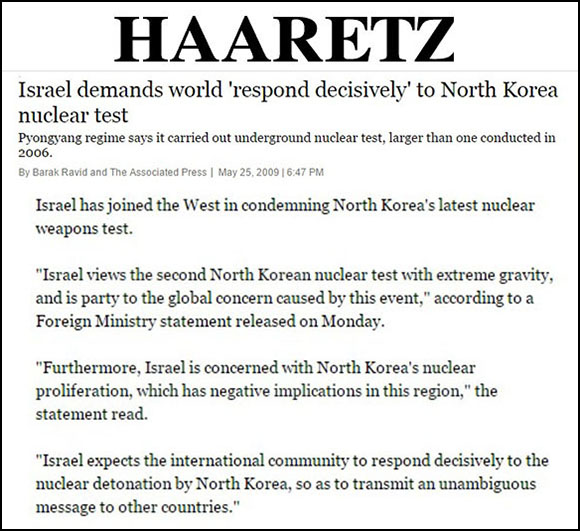 North Korea’s nuclear capability has also long been a concern of Israel. In 2009, the Zionist state hypocritically condemned North Korea for conducting a nuclear test, even though Israel has one of the largest stockpiles of nuclear, chemical, and biological weapons in the world. 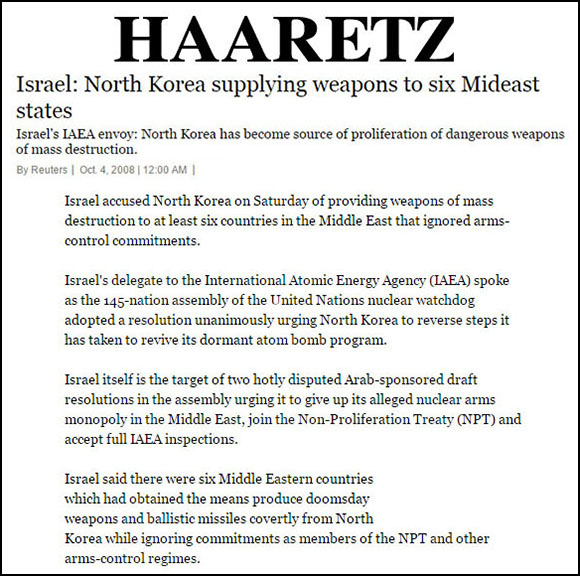 In an article published in the Israel newspaper Haaretz in 2009, the Israeli foreign ministry said that “Israel is concerned with North Korea’s nuclear proliferation, which has negative implications in this region,” adding, in a supreme act of hypocrisy, that “Israel expects the international community to respond decisively to the nuclear detonation by North Korea, so as to transmit an unambiguous message to other countries”—ignoring the fact that Israel is the world’s single greatest offender in the realm of nuclear rogue states, and has refused to sign the Nuclear Proliferation Treaty (NPT). All of Israel’s neighbors—including Iran and Syria—are signatories to that treaty.

At the time of the North Korean nuclear test, president Barack Obama issued a statement saying the world must “stand up to Pyongyang and demand that it honor a promise to abandon its nuclear ambitions” and that North Korea poses a “grave threat to the peace and security of the world.”

Obama’s words were echoed the next year by the Israeli foreign minister, Avigdor Lieberman,  who said that this “axis of evil that includes North Korea, Syria and Iran, [is] the biggest threat to the entire world.” 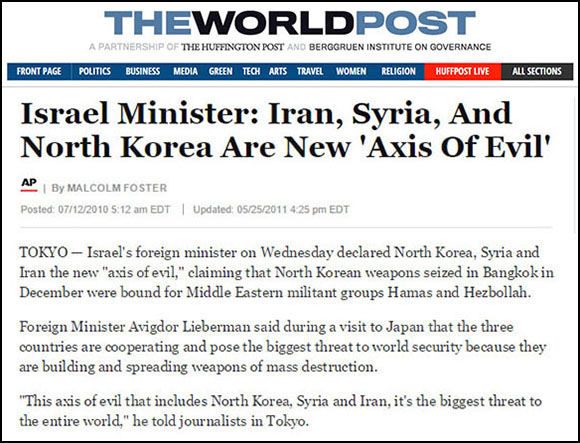 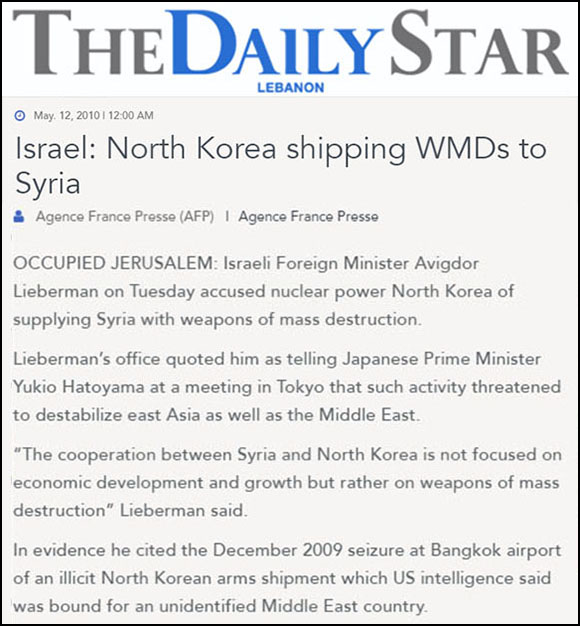 Earlier in 2014, as the Zionist attack on Gaza escalated with the murder of thousands of civilians with US-supplied high-tech weapons and bombs, North Korea announced that it would supply Hamas with weapons to defend Gaza against the Jewish aggression.

The Jewish Virtual Library, one of the Internet’s largest Jewish-run reference sites, hypocritically informs its readers that “North Korea has long been one of the world’s leading weapons proliferators, enthusiastically selling its technology to rogue nations for money to prop up its society and finance the development of its weapons systems.” 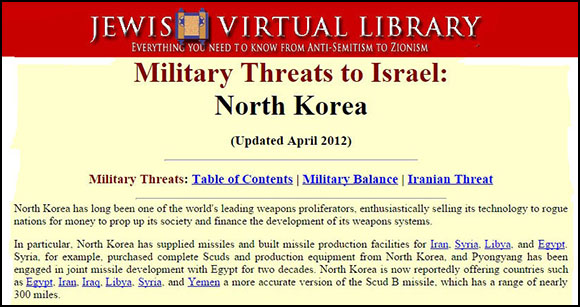 Furthermore the Jewish Virtual Library says, “Iran is North Korea’s principal customer for weapons and technology, and it has been the site of a number of missile tests carried out on North Korea’s behalf.

“North Korea could export plutonium from its nuclear weapons program, as well as weapon design data, to Iran and other Middle East nations willing to pay for it. In the worst-case scenario, the Koreans move forward with the production of nuclear bombs and then stockpile enough to have a surplus for sale to the highest bidders,” the Jewish Virtual Library concludes.

Israel also accused North Korea on Saturday of providing arms to “six countries in the Middle East that ignored arms-control commitments” according to the Haaretz newspaper—once again ignoring the fact that Israel is the only nation in the entire Middle East not to have signed the NPT.

According to Haaretz, “Israel said there were six Middle Eastern countries which had obtained the means produce doomsday weapons and ballistic missiles covertly from North Korea while ignoring commitments as members of the NPT and other arms-control regimes.”

Viewed in this light, it becomes obvious why the US government—controlled as it is by the American Israel Public Affairs Committee (AIPAC), Jewish campaign funding, and directed by the Jewish Supremacist-controlled mass media—is so hostile to North Korea.

The US government is, just like in Iraq, Iran, and Syria, simply following the orders given to it by the Jewish lobby to destroy all enemies of Israel—even if those orders are directly contradictory to the interests of America and will result in the death and maiming of even more Americans.

Perhaps the final word to illustrate the Jewish media and government controlled Israeli bias is the Zio-controlled U.S. policy in Syria. Zi0-controlled America has opposed a secular, Western-educated leader, Assad, while supporting al Qaeda and ISIS forces opposing them.

The only way one can explain such clearly anti-American policy is to understand that Syria is Israel’s enemy, and thus they don’t care if America’s worst terrorist enemies are supported in Syria. The support of the radical Muslim extremists and the sanctions against Assad led directly to the ISIS threat to the entire Middle East and to Americans wherever they are in the world.

The real Terrorist State is Israel.

It is the real enemy of America and every true interest of the American people.

Ultimately it is not the N. Koreans who pose the ultimate threat to us. It is the Zionists who control Sony and the rest of the toxic lies of Hollywood and news media, who control and rip us off in FED, the World Bank and the IMF, who buy and sell our politicians with their ill-gotten obscene wealth.

That is why the hackers of the Jewish bosses are “terrorists” and the murder and ethnic cleansers of Palestinians, and the Israeli state who committed terrorist attacks against America — are our “valiant allies.”

However, Americans and the entire world, including all of the Western World are beginning to wake up to the ultimate threat to us all: Zio Globalism.