Judaism is genetic in origin and it is possible to detect Jewish genes by home DNA testing, the Israeli-based Jewish People Policy Institute (JPPI) has announced. 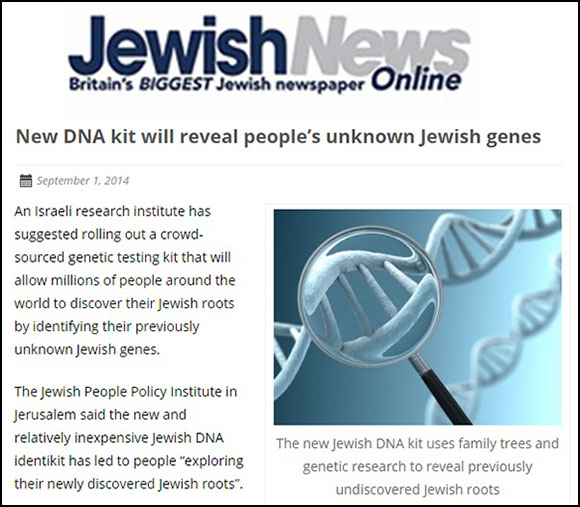 “Millions of people around the world may discover they have Jewish roots as a result of direct-to-consumer DNA Testing,” the JPPI said in a statement released this past week.

The JPPI was founded in 2002 by the Jewish Agency in Israel, was designated in 1929 as provided for in the League of Nations’ Palestine Mandate.

The JPPI is headed by a board of directors that is now chaired by long time Jewish Supremacist Dennis Ross, who, in conjunction with the American Israel Public Affairs Committee (AIPAC), founded the Washington Institute for Near East Policy (“WINEP”).

Ross also wrote frequently for publications like The Washington Post, The New York Times, The Jerusalem Post, The New Republic, USA Today and The Wall Street Journal and worked as a foreign affairs analyst for the Fox News channel. According to the Wall Street Journal, Ross was among the principal authors of Barack Obama’s address on the Middle East to AIPAC in June 2008.

The JPPI is, therefore a significant player in international Jewish Supremacist affairs, and its announcement that there is a genetic basis to Judaism is most certainly the official position being adopted by all major Jewish organizations, inside and outside Israel.

According to reports in media sources meant only for Jews (such as the UK’s Jewish News and Israel’s Jerusalem Post—but kept completely quiet in the Jewish-Supremacist mainstream news sources directed at non-Jews), the JPPI has also recommended to the Israeli  government, “as well as Diaspora communities” that they start distributing home DNA testing kits to people to make sure they have Jewish genes.

According to JPPI president Avinoam Bar-Yosef, such efforts would not focus on proselytization but rather on creating an “expanded circle of individuals with some Jewish roots who feel an affinity and identification with the Jewish people and the State of Israel.”

Such efforts, a spokeswoman for the think tank told The Jerusalem Post, could serve to buttress Israel’s standing abroad and help build bridges between Jewish communities and their neighbors abroad.

Furthermore, the JPPI said that the ability to determine prior familial links to the Jewish people could “offer opportunities for connecting, engaging and strengthening the bonds of the Jewish people.”

Citing a New York Times report from 2005 regarding American Hispanics embracing aspects of Jewish culture due to indications that they were descended from Spanish Jews forcibly converted to Catholicism, the think tank stated that the results of genetic tests “have the potential to deeply affect one’s self-conception of belonging to the Jewish people” and could “lead to other forms of Jewish engagement.”

Slepkov was likely referring to some who claim that the Jews of today are unrelated to the Israelites of the Bible such as Israeli academic Shlomo Sand, whose book The Invention of the Jewish People, which claimed that contemporary Jews are the descendants of the Khazars, Berbers and other groups.

Slepkov of the JPPI says the new kit “has the potential to inform one’s sense of identity, despite the controversial questions with political implications that may arise”.

He suggests that the increasing awareness among Jews that they are “distant cousins” could “create or reinforce group solidarity”.

The announcement that Jews can be identified by their specific genetic make-up comes as no surprise for informed observers, and finally disproves the claims by Jewish Supremacists that they are “just a religion.”

The ability to determine Jewish ancestry through DNA analysis also confirms the inaccuracy of the “Khazar theory,” as already pointed out on this website. This is because Jewish DNA can be detected in both Ashkenazim and Sephardic Jews, something that would not be possible of the Ashkenazim Jews were “outside converts” as the Khazar theory claims.

Previous Post Hear Dr. David Duke on How an Understanding of Jewish Supremacy Allows him to Accurately Predict Events