By Dr. Patrick Slattery — A year ago, just as President Trump was finally getting the bulk of his cabinet past historic confirmation foot-dragging in the Senate and starting to actually govern, the Zio media plastered our TV screens with images of babies in oxygen masks, and then praised Trump as being presidential when he dutifully lobbed 59 missiles at a Syrian air force base, killing dozens of people.

At the time, I called it a Jew d’état, which I think is a great term because it combines the phrase coup d’état, the act of taking unconstitutional measures to seize power, with the word Jew, which denotes the people people doing the seizing. 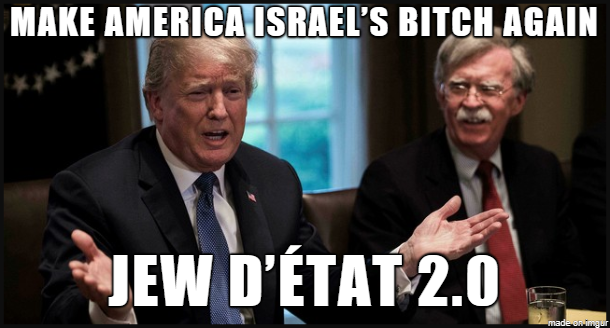 It was a retarded thing to do. Trump, already faced with massive, mindless pussy-hat demonstrations and a full court press on “Russian hacking” by the Zio media, thought he could buy himself a little breathing space with the blood of Syrian soldiers who otherwise would have fought ISIS.

Of course, the whole thing blew up in his face when his false sense of security led him to fire FBI Director and deep state hack James Comey on the basis of an memo written by of his Jewish Deputy Attorney General, who then double crossed him and hire Mueller to go on a witch hunt.

Fast forward a year and Trump finally started acting on his campaign promises, first with tariffs against China (not a priority for me, but still something that gets up the noses of the elite), and then with his dual announcements of his intention to withdraw from Syria “like, very soon” and also to deploy troops on the Mexican border.

The timing is really telling. Trump could not be allowed to carry out his agenda. So the press and the deep state are rerunning the Syrian gas hoax from last year. It worked once, and it looks like it may work again. Of course, the lack of any evidence and the extreme lack of plausible motive on the part of President Assad are even more glaring this time. Tucker Carlson nailed it, challenging Mississippi Senator Roger Wicker to explain why a war in Syria would be in America’s national interest. Tellingly, Wicker stammered something about caring about Israel, but then conceded all of Tucker’s other points.

When a Senator on national television calling for war literally cannot find list any reason other than carrying about Israel, how can we call this anything other than a war for Israel. And we elected Trump for MAGA (Make America Great Again), not MAIBA (Make America Israel’s Bitch Again).

I believe it was the great wordsmith Shakespeare who said “Fool me once, shame on… shame on you, fool me… you can’t get fooled again.”

Previous Post Trump, don’t do anything retarded in Syria! — With Mark Collett