Imagine for a second if a single major synagogue in Europe or America was defaced with graffiti that said “Jews are garbage” or “Death to Jews”—the media uproar would be instant and overwhelming.

Yet, such outbursts of hate and venom are common in Israel—directed against Christians and Arabs. In fact, official figures reveal that there have been over 2,000 such reported incidents in recent years.

But there is hardly a word of it in the Jewish Supremacist controlled mass media . . . In fact the only time one can even hear about these examples of vicious Jewish racism is in media outlets catering specifically for Jews.

In one such recent case, the Israeli-based Times of Israel has reported on a new attack in Jerusalem, in which the words “Jesus [is] garbage” was spray-painted on church wall and “Death to Arabs” was painted on another wall nearby.

According to the article, the Rumanian Orthodox Church on Hahoma Hashlishit street in Jerusalem was defaced on Thursadya evening, May 8, 2014, in the latest in a series of attacks that are so common that they even have their own name: “price tag” attacks.

This name comes from the “price” which Jewish extremists say is any attempt to stop them completely ethnically cleansing Palestinians from “greater Israel”—the occupied West Bank in particular.

Just a week ago, the Catholic Church in Jerusalem formally lodged a demand “for action on the part of the Israeli government” following a series of hate graffiti attacks on its church buildings, just two weeks before the pope is scheduled to visit the country.

Once again, you will not have heard about any of these attacks unless you read the Jewish newspapers. The Times of Israel reported on the attacks, saying that Hebrew-language graffiti reading “Death to Arabs and Christians and those who hate Israel” was daubed over offices of the Assembly of Bishops at the Notre Dame centre, a Vatican-owned complex opposite the walls of Jerusalem’s Old City.

The only other source for reports on these price tag attacks comes from news outlets associated with the Palestinian victims. The Al Jazeera news outlet for example, recently carried a story titled “’Price tag’ arson attacks by Israeli settlers against mosques and churches on the rise amid government inaction.”

The report revealed that Giacinto-Boulos Marcuzzo, the Roman Catholic Bishop of Nazareth, had had a note delivered at his home. It warned that he and his followers had until May 5 to leave the “land of Israel”.

In a similar incident, vandals also targeted a church at Tabgha on the Sea of Galilee that marks the site where Christians believe Jesus performed the miracle of the loaves and fishes. A cross was smashed and several pews damaged.

“We see that Israel is going further and further to the right. It does not matter whether you are Muslim or Christian, in these people’s eyes we are the enemy.”

A wave of violence has spread throughout Israel, Al Jazeera reported, which have included arson attacks against Christian churches and mosques alike.

According to Al Jazeera, there “may be several possible triggers for this current wave of attacks, including the Israeli right’s growing concern that the peace talks, which formally came to an end this week, will not make headway. Jewish nationalists are also reportedly angry at the impending visit of the pope.”

Apart from the controlled news blackout given to these outbursts of Jewish racism, the other defining characteristic of these attacks is the almost complete failure on the part of the Israeli state to make any real effort to catch the perpetrators.

On the odd occasion that some people have been arrested, they are usually released without charge on the grounds that they are “juvenile pranksters.”

According to Al Jazeera, Palestinian leaders have accused Israeli authorities of repeatedly turning a blind eye to attacks by Jewish extremist groups.

“If these crimes were being committed by Palestinians against Jews, the culprits would be caught within hours or days,” said Awad Abdel Fattah, a member of the Higher Follow-Up Committee, the main political body for Palestinians inside Israel.

“But no one is protecting us from these attacks. The police and the government see us, not these extremists, as the enemy,” Abdel Fattah told Al Jazeera.

In the US State Departments’ annual Country Report on Terrorism, published last this week, it was noted that:

“Attacks by extremist Israeli settlers against Palestinian residents, property, and places of worship in the West Bank continued and were largely unprosecuted.” 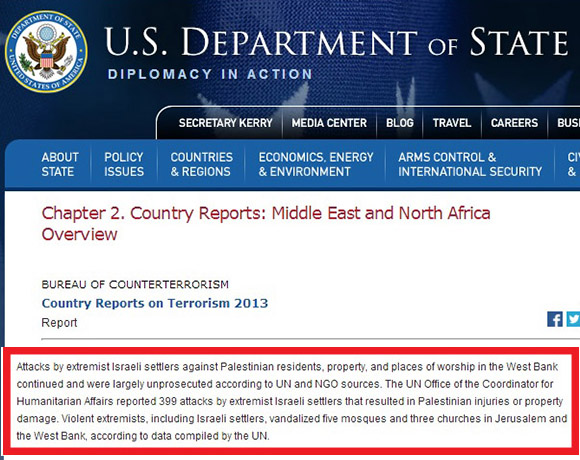 Contrast all of this to the blanket media coverage given to any incident directed against Jews, and the pattern becomes obvious: the Jewish Supremacist mass media deliberately covers up all incidents of Jewish racism, and continually highlights and emphasizes examples of untoward behaviour by anyone else.

It is nothing less than what informed observers have come to expect from the Jewish Supremacists, who are the biggest racists on earth, but, in an effort to hide their own racism, always accuse everyone else of the sin of which they themselves are the biggest perpetrators.

* The Jewish attitude towards Christianity was summed up on the book “Jesus in the Talmud” by Peter Schäfer. 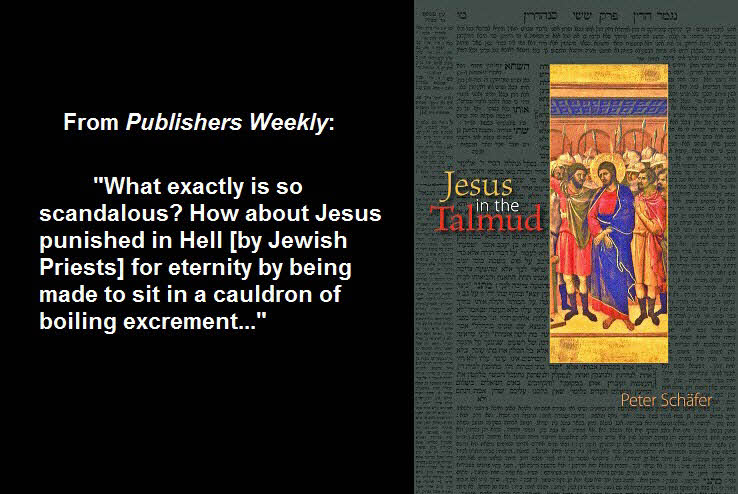 That book revealed that the Talmud, which is the highest authority of Judaism, not only makes hateful and pornographic attacks against Jesus Christ, it even boasts that the Jewish community, not the Romans, arrested, tried and executed Jesus. In fact, the Talmud exudes so much hatred against Jesus that it claims the Jewish priests subjected his body to a series of four different torturous executions.

Next Post Hear Dr. Duke on Jewish Terrorism against Christians