By Dr. Patrick Slattery — The nuclear deal reached with Iran has been cause for celebration in the streets of Tehran, while Netanyahu was offered the platforms of three major U.S. news networks to decry the agreement. One would think that Iran was offered major concessions, special privileges, even exemptions from the Nuclear Non-Proliferation Treaty (NPT) that forms the basis of international law regarding nuclear weapons. 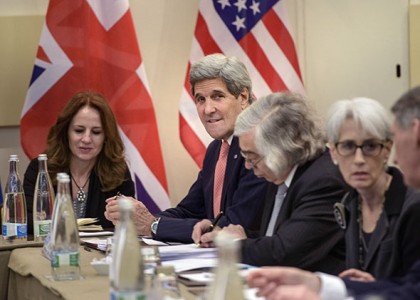 In fact, the deal was very one-sided — in favor of Israel. Israel has refused to sign the NPT from the start and went ahead and developed a substantial nuclear arsenal using nuclear technology stolen from other countries or provided to it illegally. Countries that sign the NPT are forbidden from transferring nuclear technology to non-signatory states. Iran, for its part, signed the treaty as a non-nuclear weapons state.

Iran in the 1970s embarked on the construction of a nuclear power industry with the full cooperation of the United States. That was under the Shah. Then the Iran’s Islamic Revolution broke out, the Iran-Iraq War ensued, and the plans for nuclear power had to be put on the back shelf.

Once Iran’s situation stabilized, it made arrangements with Russia and Germany to finish its nuclear power plants. However, in the ensuing years, Iran had become Israel’s “enemy number one,” and its nuclear program became an excuse to subject it to a slew of crippling economic sanctions.

Furthermore, Iran voluntarily agreed to inspections from the International Atomic Energy Commission, which oversees cooperation with the NPT, above and beyond its obligations under the treaty. Israel, on the other hand, has never been subjected to even the slightest pressure to sign the treaty or open its vast nuclear complex to the slightest international inspection.

So then, if the deal, which subjects Iran to seemingly permanent responsibilities above and beyond the NPT provisions, is so one-sided against Iran, why the celebrations in Tehran? And if the treaty was negotiated by Zionist American Jews like John Kerry (Kohn) and Wendy Sherman (to say nothing of the France’s Jewish Foreign Minister Laurent Fabius), why is Netanyahu up in arms?

The answer is that there is a difference of opinion between crazy Zionists who believe (or at least publicly pretend to believe) the lie that Iran has designs for “wiping Israel off the map” on the one hand, and more cunning Zionists who know that Jewish tribal power has never been greater and a war with Iran would unnecessarily  rock the boat.

Netanyahu is accused of having a messianic vision of his role in Jewish history that is driving his mad pursuit of war with Iran. If he doesn’t have such a vision, certainly many extremist Jews who support his policies are deluded enough to see Iran in messianic terms. At any rate, Netanyahu has been crying wolf regarding Iran for so long that any Israeli who has believed his mad claims about Iranian intentions may well consider emigrating unless Iran’s nuclear facilities are bombed out of existence.

As for Iran, the threat of a Zio proxy war against it are real, and even the concessions that have been perpetuated in the new agreement do not guarantee that Iran will not be attacked. But, for the time being at least, it seems that the cunning Zionists who understand that a war with Iran is in nobody’s interest have the upper hand, and that is enough for Iranian jubilation.

For the rest of the world, we need to understand that as welcome as any agreement averting war may be, it is not a defeat for Zionism in general, and much needs to be done to regain control of our country from its Zionist rulers.

Next Post Dr. Duke explains how nuclear deal was reached with gun to Iran’s head