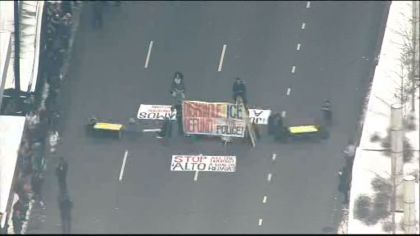 CHICAGO (CBS) — A dozen protesters were arrested Tuesday morning, after blocking traffic on Congress Parkway as part of an anti-deportation rally that lasted more than an hour.

Shortly before 8 a.m., about 50 protesters began blocking traffic on eastbound Congress at LaSalle Street, outside a U.S. Immigration and Customs Enforcement field office.

More than a dozen protesters linked arms to block traffic at Congress and LaSalle.

The protest backed up traffic on the inbound Eisenhower Expressway, which ends at Congress and Wells Street.

The demonstrators were protesting U.S. immigration policies, and law enforcement raids on immigrants’ homes. Protesters demanded an end to all deportations.

The protest blocked traffic on Congress for nearly 90 minutes as police officers and firefighters worked to cut the chains the protesters used to shackle themselves together. Some protesters placed bicycle u-locks around their necks or legs to secure themselves to ladders. Others chained themselves to what appeared to be large tubs of cement.

Traffic was rerouted to nearby streets while the protest was underway.

Police said a dozen protesters were arrested. Traffic on Congress began moving again around 9:30 a.m., as the remaining protesters headed to the Central District police station at 18th and State streets.

Next Post Up to 5,000 jihadists could be in Europe after returning from terror training camps abroad: Zio-Watch, February 21, 2016