The ongoing crisis in Iraq—the direct result of the war generated by the Jewish-Supremacists in control of the US Government—has once again highlighted the massive cost, in both human and physical terms, to Americans of the insane Zio-Wars. 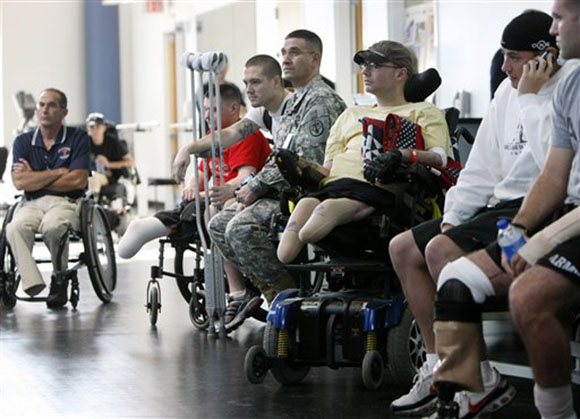 Both the wars in in Afghanistan and Iraq have cost the American taxpayer over $4.4 trillion.

This has been spent on the 1.8 million soldiers who have been deployed in both those countries since 2001, their support logistics, aid to “rebuild” Iraq (since made worthless by the ongoing conflict and now the ISIS attack), and the aftercare needed to provide for the injured veterans. 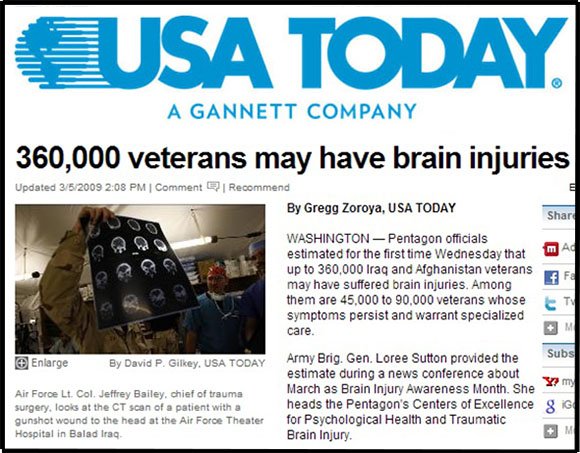 According to USA Today, of the 1.8 million soldiers deployed, at least 360,000 suffered “traumatic brain injuries” and among them are “45,000 to 90,000 veterans whose symptoms persist and warrant specialized care.”

Those figures were provided by US Army Brig. Gen. Loree Sutton in 2009. She based her estimate upon military health-screening programs showing that 10% to 20% of returning troops have suffered at least a mild concussion. Among them are 3% to 5% with persistent symptoms that require specialists such as an ophthalmologist to deal with vision problems. Sutton’s estimate is similar to a RAND Corp. study that said 320,000 may have suffered a brain injury.

The Pentagon’s official figure for U.S. military war casualties of all kinds in Iraq and Afghanistan is about 33,000. 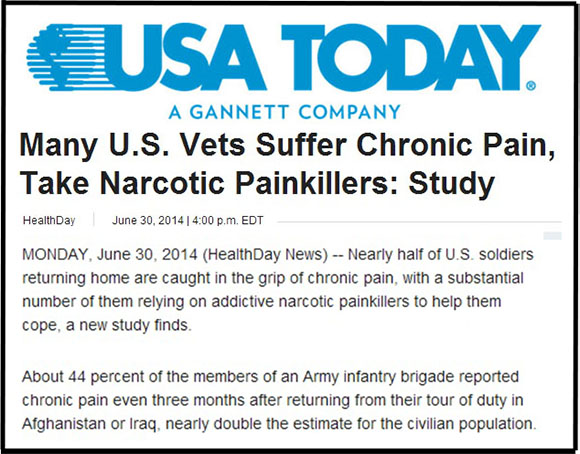 In a new report, also in USA Today, it was revealed that nearly half of U.S. soldiers returning home “are caught in the grip of chronic pain, with a substantial number of them relying on addictive narcotic painkillers to help them cope.”

According to that report, about 44 percent of the members of an Army infantry brigade reported chronic pain even three months after returning from their tour of duty in Afghanistan or Iraq, nearly double the estimate for the civilian population. Civilian chronic pain rates are about 26 percent.

Soldiers also are nearly four times more likely than civilians to use prescription narcotics to treat their pain, according to the report published online June 30 in the journal JAMA Internal Medicine. About 15 percent of soldiers in the brigade reported using narcotic painkillers within the last month, compared to 4 percent of civilians.

According to the “Cost of War” website—set up and maintained by leading academics from major American universities—the total tally of all of the war’s recorded dead — including armed forces on all sides, contractors, journalists, humanitarian workers and civilians — shows that over 350,000 people have died due to direct war violence, and many more indirectly.

Their major findings included the following:

* 220,000 civilians have been killed as a result of the fighting at the hands of all parties to the conflict, and more will die in Afghanistan, Iraq, and Pakistan as the violence continues. But most observers acknowledge that the number of civilians killed has been undercounted. The true number of civilian dead may be much larger when an adequate assessment is made.

* While we know how many US soldiers have died in the wars (over 6,800), what is startling is what we don’t know about the levels of injury and illness in those who have returned from the wars. New disability claims continue to pour into the VA, with 970,000 disability claims registered as of March 31, 2014 Many deaths and injuries among US contractors have not been identified.

* Millions of people have been displaced indefinitely and are living in grossly inadequate conditions. The number of war refugees and displaced persons — 6.7 million — is equivalent to all of the people of Massachusetts fleeing their homes.

* The armed conflict in Pakistan, which the US helps the Pakistani military fight by funding, equipping and training them, is in many ways more intense than in Afghanistan although it receives less coverage in the US news.

* The United States is at war in Yemen, having made an estimated 76 drone strikes in that country.

* The wars have been accompanied by erosions in civil liberties at home and human rights violations abroad.

* The human and economic costs of these wars will continue for decades, some costs not peaking until mid-century.

* The US federal price tag for the Iraq war — including an estimate for veterans’ medical and disability costs into the future  —  is about $2.2 trillion dollars.  The cost for both Iraq and Afghanistan/Pakistan is going to be close to $4.4 trillion, not including future interest costs on borrowing for the wars. Many of the wars’ costs are invisible to Americans, buried in a variety of budgets, and so have not been counted or assessed. For example, while most people think the Pentagon war appropriations are equivalent to the wars’ budgetary costs, the true numbers are twice that, and the full economic cost of the wars much larger yet.

* As with former US wars, the costs of paying for veterans’ care into the future will be a sizable portion of the full costs of the war.

* The ripple effects on the US economy have also been significant, including job loss and interest rate increases, and those effects have been underappreciated.

* While it was promised that the US invasions would bring democracy to Afghanistan and Iraq, both continue to rank extremely low in global rankings of political freedom, with warlords continuing to hold power in Afghanistan with US support, and Iraqi communities more segregated today than before by gender and ethnicity as a result of the war.

* Women in both countries are essentially closed out of political power and high rates of female unemployment and widowhood have further eroded their condition.

* During the US troop withdrawal from Iraq, President Obama said that the United States military was leaving behind a “sovereign, stable, and self-reliant Iraq.” This was not only an inaccurate account of Iraq’s situation at that time, but the country has since become less secure and politically stable.