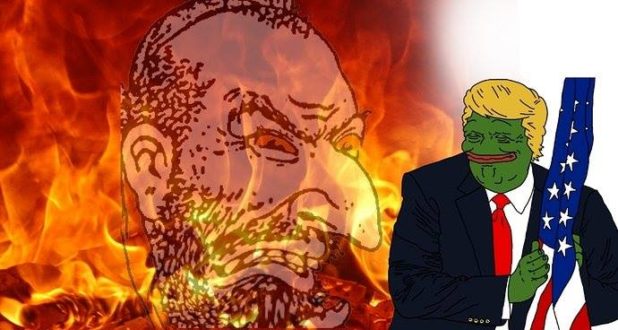 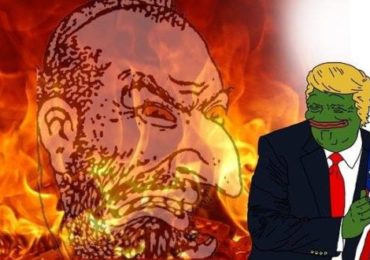 Hey Jared, Jews May Look White, But They Sure Don’t Act White!

By Dr. Patrick Slattery — Jared Taylor of American Renaissance recently gave an interview to a Swiss radio host in which he discussed race and crime statistics. As usual, he spoke very eloquently about the race issue. Unfortunately, as usual he completely left out the Jewish role, instead blaming curiously suicidal white leftists as the culprits.

Yes, there are many white liberals who have been brainwashed into celebrating the demographic demise of the white race, but increasingly you are seeing the same trend among conservatives. Politicians and media personalities identified with “the right” in America have become just about as likely to promote all aspects of multiculturalism and the benefits of “diversity” as those on the left. How many times did we hear Jeb Bush or John Kasich or Marco Rubio (or that creepy senator from Texas whose name must forever remain unspoken) say that we are a nation of immigrants? Didn’t Glenn Beck hold his big rally on the steps of the Lincoln Memorial in explicit imitation of Saint Martin Luther King?

Kevin MacDonald, Andrew Joyce, David Duke, and many others have documented the Jewish role in passing the 1965 Immigration Act, in promoting the civil rights movement and welfare system that allows for black dependency, and especially the domination of academia and the media that are the very vehicles of brainwashing society.

If you leave out the Jewish role, there is no plausible explanation for the self-destruction of white America. Taylor and many others scapegoat liberals, but are unable to come up with any persuasive motivation for this death wish. You cannot just say that white liberals are stupid without any evidence. It is sometimes said that they want to import voters who will likely vote Democratic after many years when they finally gain citizenship, which on the surface has a certain logic only insofar as the immigration issue is concerned, although it is contradicted by the longstanding Republican complicity in immigration (Republican congressmen were more likely that Democrats to vote for the 1965 immigration act, Reagan granted the first big amnesty, Bush, Rubio, and so many other current Republican leaders are pro-immigration).

And of course, the explanation “attracting voters to the Democrats” makes no sense in the massive cover-up of the black crime tsunami. Nobody talks publicly about it. What does make sense? Jewish hostility towards white European Americans and their desire to cement their hegemonic position in American society by eliminating a white majority that would be the only ethnic block capable of dislodging Jewish tribal power. That makes perfect sense.

If liberals and cuckservatives are being brainwashed, who is brainwashing them? Who are the opinion leaders in society? The media for one, and we know who dominates the media. Academia, (including public schools) for another, and again we find Jewish domination. Politicians? He who pays the piper calls the tune, and Jewish money greases the wheels of our electoral system.

If you don’t identify the culprits, and in fact misidentify them, how on earth do you expect to solve the crime? In fact, by blaming “leftists” or liberals in general, you pave the way for liberal-bashing false profits from Bill O’Reilly to Sarah Palin (not to mention the Bush family), while making it impossible to awaken those liberals who identify as such due to non-racial issues such as opposition to war or a desire to protect the environment, and would actually be very open to a narrative that shows whites are the victim of racism led by a hostile Jewish elite.

So while Jared Taylor does extremely valuable work on the problems of black criminality and IQ, his refusal to address the Jewish question because they “look white to him” makes him a very poor spokesman for this new racially aware movement that has been regrettably named the Alt-Right. Granted, there are precious few people willing and able to stand in front of a press conference and intelligently address the Jewish issue along with all the other issues crucial to the survival of white America, but we have at least one such individual, and he is running for Senate in Louisiana. If anyone should be representing us at this juncture, it is David Duke.

As for the moniker “Alt-Right,” it is problematic precisely because it is rooted in the whole left-right paradigm, which is just one more divide and conquer tool in the Jewish kit. It is not as if politics can be laid out in a single one-dimensional continuum, and it is also not as if the words left and right have anything like the same meanings to different people. But more than that, why alienate so many whites by insinuating that they take all the blame for our current predicament.

As alluded to above, the immigration tsunami was very much a bi-partisan project. Also, the insane Zio-wars, which whipped up so many people on the right into a patriotic fervor and led them to support the Jewish neocon agenda, were opposed by rank and file liberals. But perhaps most importantly, “pro-choice” liberals have done more to slow our demographic demise than almost anyone realizes, especially liberals themselves.

While I certainly understand people’s moral repulsion to abortion, in terms of our demographic survival it has helped stave off our destruction. Blacks are almost four times as likely to have abortions as whites. There have been 15 million abortions to black mothers since Roe v. Wade, and many of those aborted fetuses would be mothers or even grandmothers by now. Without abortion, blacks would be more like 18% of the population instead of the current 13%. And these unwanted fetuses would if anything have been more prone to criminality and welfare dependency than their live born siblings. The date that whites become a minority would have been moved up by several years.

Granted, in the early days abortion hit the white population harder (which no doubt had much to do with Jewish support for it), and the reason that white liberals support abortion has little to do with racial awareness. But the pro-choice icon Margaret Sanger had exactly those intentions, and it is a great irony that the organization she founded, Planned Parenthood, was Conservative Inc.’s public enemy #1 for 2015.

So the whole left-right nomenclature should be thrown in the trash bin. Perhaps the new movement could be called the Alt-White. Or maybe just “The Alt.” At any rate, Jared Taylor famously stated that “Jews look white to him.” To that we must reply, “Yes, but they sure don’t act white.”