Dr. David Duke Exposes Zio Media Lies about His Statement on Nicki Minaj
Today Dr. David Duke has a foundational show that begins by a discussion of the recent Zio media lies about Dr. Duke’s comments on the Nicki Minage, and the filthy, violent and destructive gangsta rap music that so damages millions of young African Americans and a sector of young white Americans.

He corrects the lies that are now being headlined in the Black media to divert them from understanding the Jewish role in this destructive direction the Jewish music moguls are pushing rap music — toward degenerates such asNicki Minage which surely harm the values that most thoughtful blacks want for their people.

In order to divert black and white people from his truthful comments about the Jewish power behind this filth, Zio media has lied and said that Duke attacked Minage because she spoke in support of anti-police demonstrators. Totally untrue. 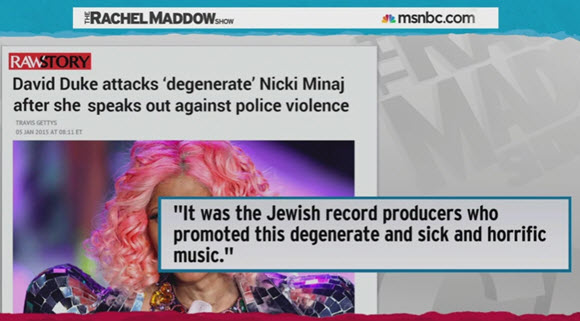 The have lied that Duke said blacks didn’t create rap. Untrue, Duke said that the Jewish moguls of music simply popularized it and its most destructive forms in their controlled media.

And finally they lie that David Duke blames Nicki Manaj for this damage. In his originally reported radio show he says specifically she in not to blame, she is nothing, one who deserves no recognition and would receive none in a healthy media and society, the blame must fall on the music moguls who peddle this toxic filth to our youth!

Duke also early in the show talks about the secret relationship between blacks and Jews and the role of the Jews in the most horrendous part of slavery the slave trade itself under which millions of blacks endured horrendous suffering, all while they demonize whites for the slave trade which actually was Jewish not European based. — But not a word of this Jewish control in the mainstream Zio media.

Dr. Slattery joins Dr. Duke in the final segment and he documents the whole controversy.

listen, share, and be sure to support davidduke.com and the work of Dr. Duke tangibly with your dollars in addition to your agreement!

Once again Dr. Duke breaks through the electronic Zio Curtain over America and the world!

Remember to go to DavidDuke.com and support his work!