By Dr. Patrick Slattery — After months of light-hearted trash talk banter, God-Emperor Donald Trump and Glorious Leader Kim Jong-un have agreed to meet in the near future to solve the world’s problems. The time and place of the meeting between the heads of the United States and Best Korea has yet to be determined, but it is expected to take place by May. 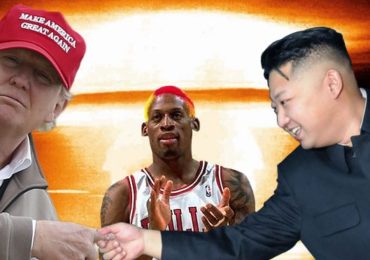 President Moon Jae-in of Pretty Good Korea apparently facilitated the rapprochement between the two leaders, which had been strained due to an atmosphere of paranoia created by Zionists and militarists. The trash talking was necessitated due to the fact that the only Americans that the Glorious Leader is familiar with are Basketball-Americans like Dennis Rodman, and thus all communications between the two heads of state have to be conducted in Ebonics.

Honestly, there are going to be a lot of people credit Trump’s willingness to go to the brink of nuclear war for forcing an obstinate Kim to the bargaining table. I think this is wrong. North Korean leaders for the past seven decades have wanted nothing more than to meet with the U.S. president on equal terms, and they have been willing to make major concessions to do so, including giving up weaponry for pieces of paper promising non-aggression. And Trump indicated early on that he would be “honored” to meet Kim.

So who was he trying to impress with the brinksmanship? Our own media and military. Remember, our media has been calling him Putin’s puppet since before the election, and there is no way he could have met with the North Koreans (who have always had good relations with Moscow) without scaring the media into thinking that the alternative was nuclear war.

Also, Trump is calling the bluff of the military. Generals like McMaster and Mattis are of this mindset that diplomacy doesn’t work and that constant military pressure has to be applied to the North, so Trump just said “it hasn’t worked for 70 years, why not take this to its logical conclusion.” Of course, 100,000 U.S. troops in South Korea, mainland Japan, Okinawa, and Guam are within easy striking range of North Korean missiles, so the generals have had to stop larping about war.

Yes, Trump has proven to be the master of the game of chicken. But it was the American generals, not the North Korean generals, who blinked.

Anyway, this is really good, fam. For a more detailed background, please refer to my podcast on Korea.

Next Post Duke Tweet: Thank You Mr. President for resisting the insane Zionist Warmongers & striving toward peace with North Korea!