Today Dr. Slattery started the show by talking about possible changes in the confrontation with Russia over Ukraine, as the negative results from the disastrous policy pushed by arch neocon Assistant Secretary of State Victoria Nuland have become all too apparent. 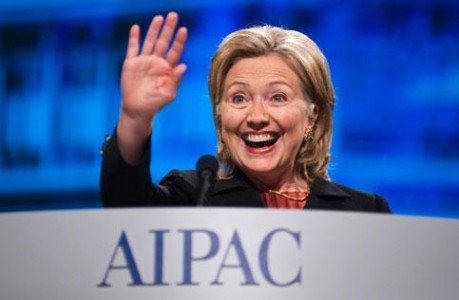 This is not photoshopped. She really is that happy to be selling us out to the Zionists!

Then Dr. Duke joined the show and revealed the extent of Hillary Clinton’s financial links to Jewish banks like Goldman Sachs as well as to other Jewish organizations. Aside from the countless millions in campaign funds her superpac has raised from well-known Jewish billionaires, she has also amassed a sizable personal fortune from speeches she has made to banks and to Jewish organizations. He who pays the piper calls the tune, and the tune is Hava Nagila!

This is another fascinating show that will arm you with the information you need to help take back our society. Please share it widely.

Previous Post Journalists filming conditions at Calais Jungle are robbed at knife-point by the migrants they were trying to help: Zio-Watch, January 20, 2016

Next Post Jonathan Pollard reportedly to speak with Jewish leaders — who will congratulate him on job well done!: Zio-Watch, January 21, 2016