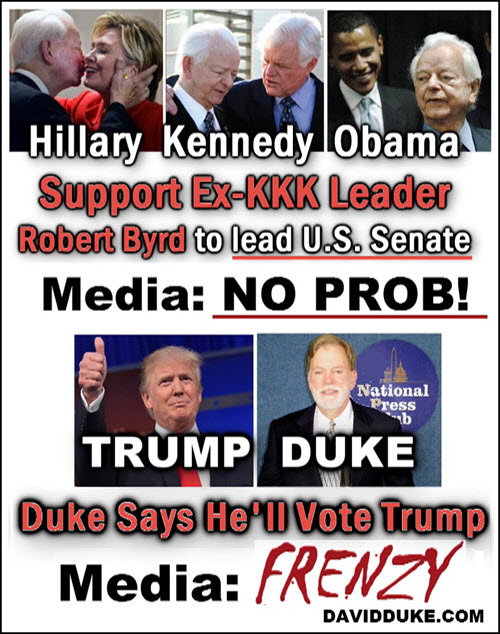 Over 500 major media articles came out today attacking me. Other than the Jewish ultra-Zionist NY Daily News, not one media called me to interview me on why I believe European Americans are overwhelmingly supporting Donald Trump. Most of them just quote the rabid Zionist NY Daily News (Jews).

The Zio media blasts Trump because I have supported him.

No candidate can control what people say about him.

But any person can control whom they endorse and support.

So if Trump is blasted because I have supported, (but not endorsed} because I has a long-ago non-violent Klan history — by that criterion Obama should be far more condemned by the media for the fact the OBAMA had no problem with a “former Klan Leader Robert Byrd” being his Democratic LEADER in the Senate.

So in truth, someone’s political past is not issue, not for me, not for Byrd… the real issue is how our controlled media is so hypocritical and manipulates people!

Why is this the case? It would seem to be common sense and good journalism to interview the person about whom one was writing an article. Why are they afraid to interview me?

In these “journalistic” pieces that are supposed to show no personal biases, many chose to include a 42 year old picture of me as a young man in Klan robes. I am not in the Klan. Almost 40 years ago I was in a non-violent Klan organization. Years later I served 8 years in elected office. I was an accepted member of the Republican Caucus in the House of Representatives in Louisiana.

My proper title for any truly unbiased media is Former Republican Representative, Dr. David Duke. Although I have a hard-earned Doctorate in History at an internationally recognized major University., They don’t ever use my proper, formal title of Dr (Not of medicine but History). They don’t want to mention any of this because they don’t want me to have the credibility my accomplishments represent. When you use a proper title for those you like and purposefully drop for those you don’t, you are nothing but a propagandist.

Note how the media constantly uses Dr. Martin Luther King but not Dr. David
Duke….. so it proves the dishonesty and lying nature of the Zionist media.

When I ran for Governor as a Republican, I crushed the sitting Louisiana Republican Governor by a landslide 480,000 votes to 408,000 votes. It is almost unheard of for any Republican candidate to defeat a sitting Governor, even more so when he is defeated by a candidate spending only one-twentieth money and opposing the entire Republican establishment!

Ninety-percent percent of the controlled media headlined the KKK and didn’t even mention the fact that I was one of the most nationally recognized elected officials for 8 years and won the Runoff and became the Republican standard bearer for Governor. If you read the article the only thing you would think I ever did in my whole life was the three years I led a Klan organizatoin in my twenties. You wouldn’t even know I have been elected twice to office, defeated a Republican governor and got respectable numbers in Republican primaries for President of the U.S. The only thing most articles mention is the KKK of 40 years ago. Crazy!

Harry Truman, an often-praised President of the United States, was a member of the KKK. He joined the Klan at 41 years old when he was sitting Judge!

Have you ever read a single headline about President Truman titled “Former KKK activist Harry Truman?”

In 99.9 percent of articles about him they don’t even mention this fact. Even though in my life I left the Klan many years before Truman.

So Why the Blatant Hypocrisy?

99 percent of the articles of the revered President Truman don’t even mention his Klan history?

Yet, with all thousands of pictures of me in elected office and in my campaigns they use a 40 year-old picture of me. They also don’t mention that my group was totally non-violent and that I have always condemned violence, and if they were fair they should praise me for always condemning violence to white activists!

I chose to leave the Klan when I was in my mid-20’s because I didn’t want to be associated with the media Klan persona because of a few idiots in completely unrelated “KKK” groups promoting violence or hateful and disgusting speech. I condemn that today as I did even in those early days of my political life.

The list of this media double-standard could go on and on with similar examples. Republican President William McKinley was a Klan member too. How about Democratic Senator Robert Byrd who also served as the leader of the Democratic Party in the U.S. Senate?

Sen. Byrd remained an active member of the Klan at an age far older than the age at which I moved on from the Klan, yet President Barack Obama honored him at his funeral as a “great man” and a “great American.”

Did they headline in 90 percent of articles about Robert Byrd that he was “Former Klan Leader Robert Byrd,” which in fact he was at a much older age than and he praised the Klan as a U.S. Senator!

Was Obama condemned for praising a former Klansman Sen. Byrd and for Robert Byrd’s support of him, the way the media has condemned Trump simply because I said that I agreed with some of Trump’s platform?

Can you see the incredible hypocrisy? If you are open-minded I think you can!

There is one reason for their hate campaign against me.

It is primarily because I am the most famous American political figure who has condemned what David Brooks of the NY Times calls the “Jewish takeover of America!”

I am the most well-known American who reveals the facts of the Jewish tribalist takeover of our media, the crimes Jewish predator banks such as Goldman Sachs and the total Jewish control over the Federal Reserve Bank (the FED), the Jewish/Zionist domination of campaign financing and lobbying in America, and the catastrophic role of these Jewish Oligarchs behind the Zionist wars in the mideast which have been a catastrophe for America.

. Of course, I have also proven their overwhelming influence in Hollywood, entertainment and news media. AND THAT IS WHY THEY TREAT ME SO HATEFULLY. That is why they headline my long ago brief activity in the Klan while hardly mentioning Harry Truman or Robert Byrd’s Klan history. 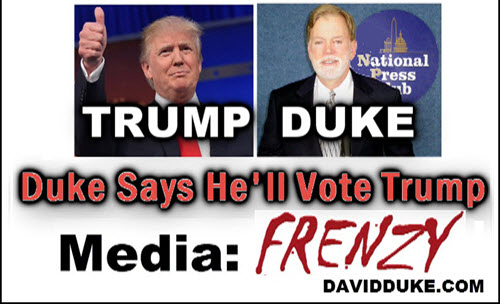 And that’s why 90 percent of the media have no problem with Obama’s communist connections, or his close relationship with a communist terror Bomber, Bill Ayers.

This is why they constantly lie about me calling me a white supremacist when in fact every day of my life I ardently condemn any sort of supremacism,

In truth they HATE ME BECAUSE I EXPOSE the Jewish supremacism of the tribe that is the real elite in America, and expose who are the real tribal supremacist oligarchs in America. The people who have the real privilege in America and who dominate the political process.

And that is one reason the media hates Donald Trump almost as much as they hate me, because he condemns the Banks and the Money Oligarchs of American politics.

The New York Times has admitted that the Republican rank-and-file have adopted the core of my political agenda.

The fact that Trump (and others) say what I said almost 25 years ago does not make him bad guy, but for those Americans who oppose the massive immigration, the destructive trade policies of America and who want to preserve the America of our forefathers — it should make me look pretty damn Good! It should afford you a reason to look into other things I have written. For instance, before the war started I did hundreds of interviews saying the war would be a disaster for America, which of course it was.

The same Jewish/Zionist media and political establishment that supported the insane Iraq War hates and opposes me. Doesn’t that tell you something?

Although I have not formally endorsed Trump, because I can’t endorse everything he says or all that he supports, I will tell you why I will vote for him and think you should too.

Again because of the lies of the media it is important I make a distinction between a formal endorsement of Trump and political recommendation. I am not endorsing him because I can’t embrace everything about the man, some of his positions I oppose such as allowing torture and supporting the State of Israel, but I think in comparison with the others, he by far the best candidate of a really horrible lot of them!

I think he deserves a close look by those who believe the era of political correctness needs to come to an end and that America needs a leader who will do the following:

1) Secure our border – if not – America and our heritage will not survive!

2) Break the power of the Jewish-controlled Federal Reserve and predator banks like Goldman Sachs (and the FED) that are robbing us and the world blind.

3) Break-up Jewish dominated lobbies and superPACS that are corrupting and controlling American politics.

4) Ensure that the USA will not go to war with Russia and create Word War III.

By the way, you can read my essays and listen to my interviews before the Iraq War in 2002 -2003 in which I said there were no weapons of mass destruction and that the war in Iraq would be a major disaster for America. I even spoke decades ago about the need to secure our borders. Dilute the homogeneity of America and I saw clearly the dangers of the Jewish takeover of America, a Takeover of the American elite that Jews like David Brooks boasts about in the NY Times.

Best Wishes to the Open-Minded Among You!