Dr. Duke started the show by going into the content of Hillary Clinton’s emails. While the issue of Clinton’s private email server was in the headlines throughout the campaign, the contents of her emails, which were revealed by Wikileaks and their veracity never denied, are almost NEVER discussed. The email show that as Secretary of State she knowingly and materially supported the rise of ISIS. 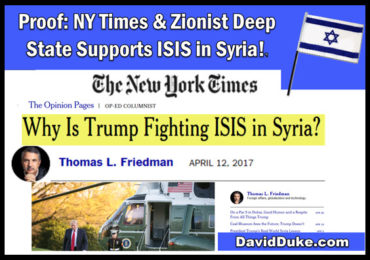 Previous Post Getting inside the head of H.R. McMaster

Next Post Trump considering how moving embassy to Jerusalem would affect peace process: Zio-Watch, May 15, 2017