Today Dr. Duke and British author Mark Collett (@MarkACollett) had a discussion about the retweet by former CIA agent Valerie Plame of an article by another former CIA intelligence officer Phillip Giraldi that convincingly made the case that the drive for Middle Eastern wars is coming from American Jews. Plame, who is best know for being outed as an undercover agent by Robert Novak during the Bush administration and subsequently becoming a cause celebre of the Democrats, had to apologize for her transgression after initially standing her ground. 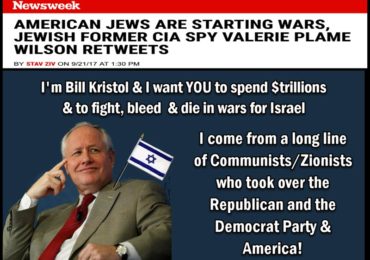 Mark Collett recounted the Jewish role in pushing the government of Tony Blair to rush into the Iraq War in 2003. He also told the story of when the late Tony Benn said that when he was minister of Technology a Jewish bureaucrat in his ministry sent plutonium to Israel without Benn’s knowledge and over the objections of the Defence Ministry. Benn later said that he “had always suspected that civil servants were doing deals behind his back, but he never thought they would sell plutonium to Israel.”

This is another lively show filled with information. Please share this show widely.