Dr. Duke starts the show by discussing a recent statement by the leading French nationalist politician Marine LePen that the United States and NATO are pushing for war in Ukraine. He then points out that while Ukrainians have legitimate historical grievances against Russia, recent developments have put it under Zionist control at the expense of nationalist interests.

He also discusses an article from the Jewish Tablet Magazine about a leading “right wing” Ukrainian politician who is not just a Jew but a proud Cohen! He points out the similarities in the playbook for causing an uprising and civil war that was seen in Kiev and a couple of years earlier in Syria. Dr. Slattery joins the show and points out the leading role of Jewish Assistant Secretary of State Victoria Nuland in engineering the Ukrainian coup d’etat that put Ukraine under Jewish leadership. 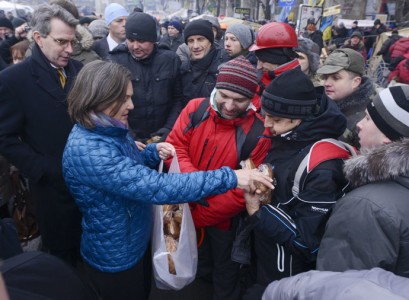 Victoria Nuland passing out sandwiches to anti-government demonstrators in Kiev

This is a vital show for anyone interested in understanding and avoiding the Zio push for war in Europe. Please share this widely with your friends and relatives.