Today Dr. Duke talked about the shooting of House Majority Whip Rep. Steve Scalise by a Bernie Sanders supporter from Illinois identified as James T. Hodgkinson. This is an example of Zio-media incitement to violence of white liberals, who are being indoctrinated to identify with “the resistance” to President Trump. The media and their pseudo-intellectual allies in academia have transformed the meaning of the word “violence” to include “micro-aggressions” or even the phrase “all lives matter.” And this then justifies violence against whites. 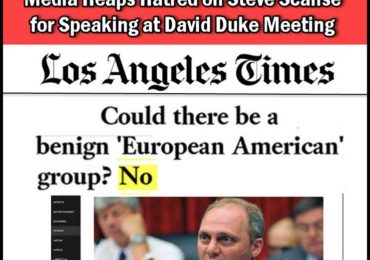 In the case of Representative Scalise, the media is justifying the violence against him by repeating in every report that Scalise once attended a meeting in his district sponsored by Dr. Duke’s European-American Unity and Rights Organization (EURO). It’s like the six degress of Kevin Bacon, only with Dr. Duke.

Previous Post The Man Behind The Curtain: Israeli Colonel Among ISIS Forces In Iraq