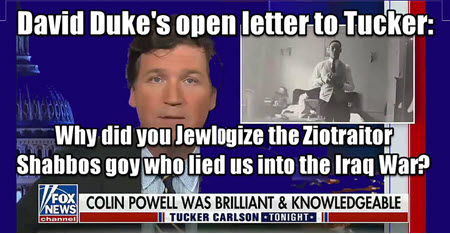 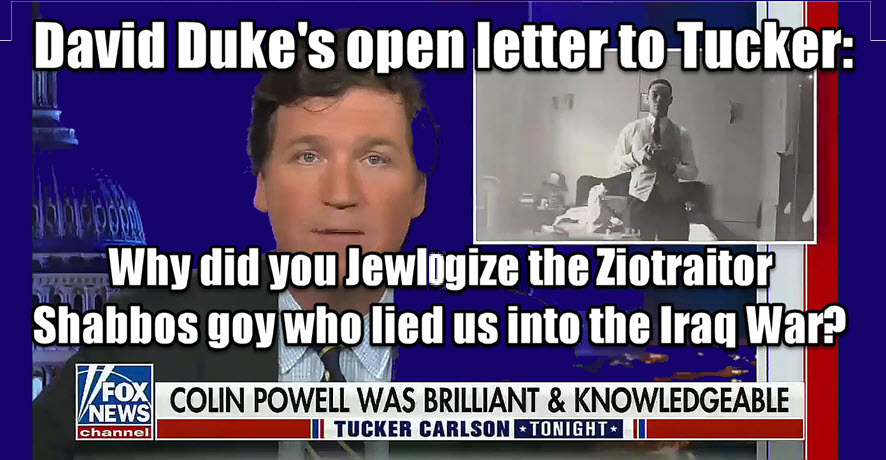 Open Letter to Tucker Carlson on your praise of American traitor Colin Powell !

Dear Tucker, We like much of what you say. But you know the Iraq War was totally created by Jewish Neocon Lies and their supremacy in our media and in the government of the United States. You must know that there are thousands of White men with far better resumes and far more intelligence than Colin Powell. They were racially discriminated against in favor of Black guy who spoke Yiddish and powerful Jews knew very well Powell was their willing Shabbos Black Boy (goy) !

You also know that Powell himself admitted that Affirmative Action is what made him the top military man in America and Secretary of State. The Jewish media which now includes you, told us the bald-faced lie that Powell was the best military man America could muster!

This is the same lies the media makes. That’s the same media that hates you and all awakened Whites.  That’s why upon his death Powell is Jewlogized by the mass media!  And by your colleagues at Fox!

Why would you add to the colossal lie about the “greatness” of Colin Powell? Why not point out the truth instead of repeating ZioMedia Jewlogy of the brilliant and patriotic Powell. why would Jewlogize this traitor who betrayed America in the Iraq War? Why do you constantly Jewlogize the open Marxist Martin Luther King, and solemnly tell us that he was a great man because of one manipulative line in one Jewish communist-written speech. The truth is King actually said he wanted massive discrimination against Whites and even supported massive appropriation of white property and money in reparations. He said that white people gave them every cent of their wealth, Whites couldn’t even compensate black people enough!

Then on your show last night (October 18 2021) you had on a anti-China guy who told us that China is the biggest threat to America. But you must know deep down in your brain, heart and soul that is not the Chinese who are the biggest threat to America, It is not the Chinese who are destroying America, it is the Jews, the Jewish racist elite that is actively the driving force behind the ethnic cleansing of our people across the world, in both Europe and America as well as every attack on our freedom and heritage, even our families, in the entire Western World.

It is not the Chinese doing this as you well know… It is true that Jews are the primary reason why China was able to enjoy the trade policies that destroyed the White middle class and made the Jewish bankers richer! But even that couldn’t have occurred except for Jewish power over our politicians and media.

How you love to tell all our people that the real danger is the Chinese. Great plan Tucker, let’s get Americans to divert our attention from the real danger, the Jewish Occupied Government, Media and Banking of the United States which is at war with the White Christian people of our nation and the entire Western World. The same Jewish power that is literally wiping our people from our own nations!

One Jewish mega criminal bank, Goldman Sachs has been the largest corporate political contributor in the history of American politics, they have done more damage to America than the nation of China has ever done its whole history!

You studied Russia and you know it is not the Russians. You must know the role of Jews behind communism in Russia, America and all over the world. You know why the Jewish neocons hate Russia. It because the Russians overthrew the no longer Jewish communist tyrants of Communism!

You know it is the not the Chinese who control the media or the social media in America. You know it is not the Russians but the Jews of Joogle and FaceBerg and JewTube, Ziowood, the mass broadcast Ziomedia and the Jewish 5th column in Congress and the deep state that is destroying America.

You know that the Jewish allstar anti-trump, impeachment crew of Schiff, Nadler, Engel and Schumer who are the clear and present danger to America. You know it is not the Chinese who are behind our open border treason. You know, you have to know, it is the Jews.

Can’t you see that telling people that China is the greatest threat is a perfect controlled opposition to make people think the real danger is Chinese when it is really the Jewish elite who dominate our media, social media and campaign funding. They are downfall, not the Chinese. It is similar to the giant cigarette companies loving it when the American Heart Association funded by big Agriculture and fake food, told us that meat, butter and fat caused the massive increase in heart disease… This all occurred when it was clearly smoking that was at fault. In fact, heart disease got worse after the food pyramid was adopted. It is also true that heart disease vastly increased when when we went from 98 percent of our fats being natural animal fats to 98 percent being from seed oils and PUFA. But ignoring smoking and demonizing meat and natural animal fats deflected people from the real drivers of obesity, heart disease, diabetes and cancer.

You don’t have to say it all the time. They would fire you and destroy you in an instant if you said what I dare to say… But you don’t have do their dirty work by praising traitors like Powell.

You don’t have to take our attention from the Jews that you often call out individually (how can you help but do so). Telling us the real danger is China  is serving their agenda. The only way we defeat this rich and powerful enemy is to know our enemy, and it is not the Russians or the Chinese, it simply put, is the Jews, or more precisely the rich and organized Jewish Global elite in finance, media, and government. It’s not the Chinese or Russians.

The Jewish Capitalist elite was the driving force behind communism that killed tens of millions of people worldwide. They are the driving force behind massive non-White immigration and brag of their role in it. They are the masters of  media and social media censorship and destruction of free speech. They are leaders of the destruction of the 2nd Amendment, and they are sickos who lead the effort to destroy the very the foundation of our people’s well being: the family. On top of all that these Jewish globalists have played the prominent rule in over a hundred years of massive wars costing more than a hundred million lives. And anyone in America knows who the NeoCons and NeoLibs in the media and government who led us to catastrophic wars in the Mideast and who are the architects of destruction of all human freedoms and rights by destruction of free speech!

You know who runs the NY-Hollywood axis of media. You know. You know runs the ADL and the SPLC and big tech and Social media.

Don’t be their Shabbos goy as was Powell.

Be the man you were meant to be.

Why would you Jewlogize Powell just like all your and our enemies do. Your instincts are right, they always have been. Be brave, be honorable. be truthful. You can do more! 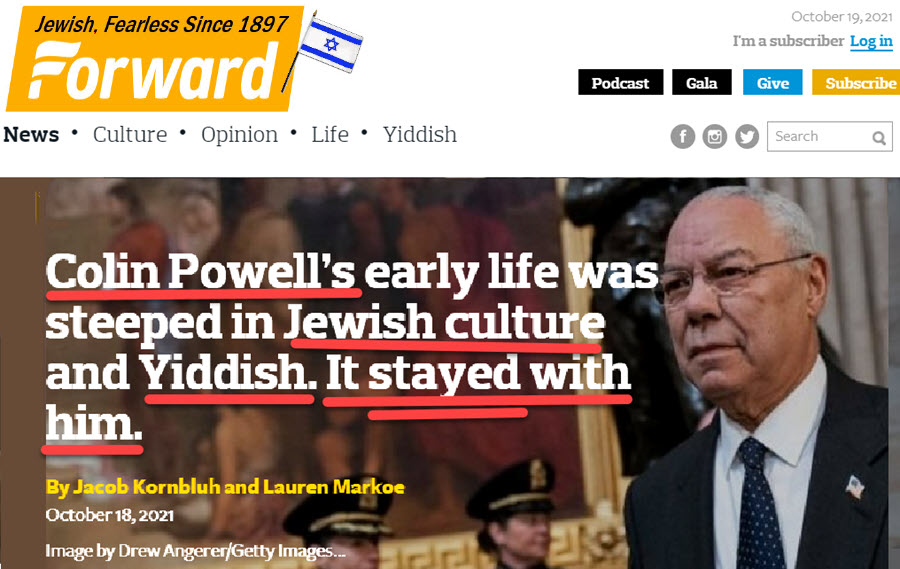 Tucker actually praises Powell and suggests he knew and opposed the Neocon Jewish treason of the Iraq War. And how Powell was a brilliant man who was smarter than all the White men around him and deserved his rise to power on the basis of his incredible brilliance. In fact, there were hundreds of thousands of White military men of better records and resume’s than Powell. He admitted that his success was the result of affirmative action which factually is not about meritocracy but advancing a nonwhite on the basis of his race!

The truth is that Powell’s only real ability was his rare ability to speak the obscure Jewish language of Yiddish because his whole life was under the employ of Jews.

Here also is a link of Mark Collett’s slatest video at Odysee with a recording of an interview he did with a leading publication that exposes their deceptions. It is very powerful.

Next Post Dr Duke & Dr Slattery on the Jewish Dictatorship Insanity such as “Rachel Levine.” Is He a “Rear Admiral?”