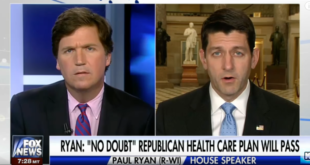 Today Dr. Duke had Daily Stormer Journalist Eric Striker as his guest for the hour. Dr. Slattery also joined the discussion. They talked about the Paul Ryan backed Republican replacement for Obamacare. In a re-run of eight years ago, the Republicans are missing the point that we already have socialized health insurance for everyone but the hard-working middle class that is paying for the system. Dr. Slattery pointed out that markets in healthcare cannot work because the prices of medical services are typically not known until a month later when the consumer receives a bill. Without price information, there can be no functioning market. He also pointed out that while national insurance makes economic sense, as long as our borders remain open it would be doomed.

They then went on to talk about President Trump’s nomination of Jon Huntsman as Ambassador to Russia. The President is in a bind in that anyone who agrees with his desire to avoid World War III will never be confirmed by the war mongering Senate. The question is will the President be able to use the strength of his personality to bend Huntsman to his will. In a positive development, the U.S. military is starting to cooperate with the Syrian government in its war against ISIS, reversing eight years of Ziobama policy of supporting ISIS.