By Dr. Patrick Slattery — The terrorist attacks in Paris last week that included a dozen killed in the Charlie Hebdo headquarters have focused the world’s attention on the priceless value of free speech. The magazine had been targeted because it had run offensive cartoons about the Prophet Mohammed.

Of course, all speech and expression, no matter whom it may offend, must be protected. Especially when it offends Muslims, because they really get riled up. That is the essence of free speech, and that is what 1.2 million people marched through the streets of Paris last weekend.

One of the marchers was a comedian named Dieudonné M’bala M’bala. I am not sure why he was marching, because he does not engage in free speech. Rather, he engages in hate speech, which is very difference from free speech, because instead of being offensive it is hurtful, which is a very different thing indeed. Or at least so I am told — I can’t really understand personally, not being Jewish myself.

And we know that Dieudonne’s speech is hateful, because he is the inventor of the quenelle, that thinly veiled “inverted” Nazi salute. Just how thinly veiled is it? See for yourself in the photo below. Dieudonne is the one on the left. Or is it the right. It’s really hard to tell the difference, that’s how thinly veiled it is. 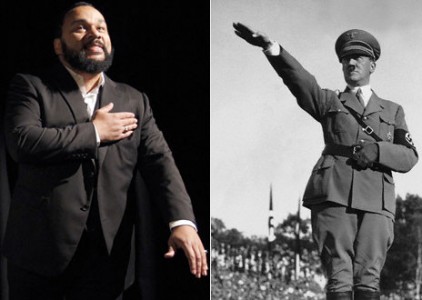 (“Quenelle” is French for suppository, and the gesture is an indication of how far “up yours” the downward extended arm is to be thrust. It is intended as an anti-establishment gesture. Zionists are aware that they dominate the establishment, and thus want to ban the gesture.)

After he marched in the demonstration, Dieudonne penned the following open letter to the French Interior Minister:

Dieudonné replies to Minister of the Interior Bernard Cazeneuve:

Yesterday we all were Charlie. We all walked and stood up for freedoms to be allowed to laugh at everything.

All the Government’s officials – you included – were walking together in the same direction.
Yet, when I came back home I felt all alone.

The Government has been targeting me for a year now and is still looking to eliminate me by any means: media lynching, ban on my performance shows, tax audits, bailiff raids, searches, indictments… More than eighty judicial procedures have struck down on my kinfolk and me.

And the Government keeps on ruining my life. Eighty judicial procedures.

Since the beginning of last year, I have been treated as public enemy number one, when all I try to do is make people laugh, and laugh about death, because death laughs at us all, as Charlie knows now, unfortunately.

Even though I offered peace under your authority in the past weeks, I did not get any answer from you yet.

Whenever I express myself some people will not even try to understand me, they will not listen. They try to find some kind of pretext to suppress me. I am looked upon as if I were Amedy Coulibaly, when I am no different from Charlie.

It seems like you do not care about my words, unless you can distort them and use them to fill yourself with indignation.

Dear Minister, since it looks like I have finally earned some listening from your part, I wish to remind you one thing:

Then, on his Facebook page, he wrote “As far as I am concerned, I feel I am Charlie Coulibaly.” Well, that was really, REALLY hateful. It was just too much. The protectors of free speech had to silence Dieudonne. I mean, be fair, he didn’t exactly give them a choice!

Enough of my attempts at humor. Professors are not trained to be funny. Very much the opposite, I am afraid. For those interested in some insightful analysis of the Dieudonne arrest, may I recommend the following articles by Glenn Greenwald. The first is specifically on the arrest, and the second regards the hypocracy of banning “hate speech” while claiming to support “free speech.” Glennwald, who is Jewish, included several anti-Jewish cartoons in the second article just to prove his point. I don’t supposed he plans on visiting France anytime soon.

Next Post Dr. Duke explains that terrorism and civil war are coming if we don’t overcome Zionist power