By Dr. Patrck Slattery — The first presidential debate is now over. Hillary was her typical disgusting self, and the good folks at CNN adored her for it. As soon as the debate ended, Wolf Blitzer, Jake Tapper, and John King — all Jews by the way, although in King’s case it is by way of conversion after his marriage to CNN’s Dana Bash — started the spin, saying that Hillary got under Trump’s skin, taking him off message. Then they switched back to the studio, where the Jewess Gloria Borger grabbed the baton. Sitting next to her was the Jew David Axelrod. I switched off the television.

It wasn’t so much that I disagreed with their assessment that The Donald got off course by taking her bate. Add to that my own disappointment that he missed many golden opportunities to hit her on issues from Syria to the content of her illegally deleted emails to her contention of systemic racism in all facets of American society. Trump scored some points, but with the press as against him as they certainly are, he can’t afford to miss opportunities.

What really bothers me is that the discussion on CNN (and I am confident all over the media) is on debating tactics and other superficiality, while the actual substance of what they were saying will be ignored. And on substance, Hillary is a disaster.

The talking heads called Trump a liar for saying that he opposed the Iraq War before it happened, based on some off-hand comment he made to Howard Stern. Trump wound up taking a lot of time citing other interviews in which he did voice opposition, but missed the opportunity to say that not only did Hillary have far more responsibility supporting the war from the floor of the U.S. Senate, but that she has huge responsibility for the war in Syria (although he did briefly mention her culpability for Libya), and that she is recklessly flirting with war with Russia.

Probably the high point of the debate for Trump was when he hit on the issue of law and order, voiced support for stop and frisk, and emphasized the support he is getting from the police, which of course implies his support for the police. Hillary talked about systemic racism in the criminal justice system and throughout society, which should have prompted Trump to ask her how many percent of white people are deplorable racists. Hillary recently suggested on the Steve Harvey show that she might speak “directly to white people, say, ‘Look, this is not who we are.’ We have to do everything possible to improve policing, to go right at implicit bias.” Trump should have said “here’s your chance Hillary, you’ve got a big audience, go talk to white people about their implicit bias.” 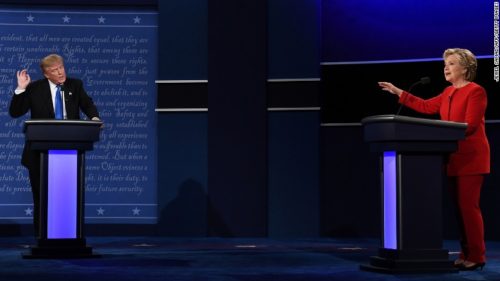 Trump probably did score some points with his bleak assessment of the situation in the black inner cities, especially when juxtaposed to Hillary’s insistence that it is thriving due to its vibrant black churches and its fictitious entrepreneur class.

One thing is for sure, the next few news cycles will be about how Hillary won the debate with her presidential demeanor and her grasp of the issues. This was a given from the start. What remains to be seen is whether the voters will buy it. The debate itself had a much larger audience than the various talking heads spin shows will have. Given a choice between a candidate who says we need to change systemic racism in the criminal justice system and one who calls for law and order and is willing to employ stop and frisk to get there, is Middle America really going to want to vote for someone who thinks the reason for the decades-long black crime wave is because white people are oppressing blacks? Even after Charlotte and Milwaukee and trillions of dollars of welfare? How the voters themselves judge tonight’s debate remains to be seen.

What is clear is that, as important as Trump’s candidacy is, electing Dr. Duke to the U.S. Senate is vital. Trump doesn’t always get his message across, he pulls punches regarding race, and he gives unfortunate lip-service to Israel and certain other Zionist obsessions. Dr. Duke speaks clearly and courageously, and we need to get his voice in the Senate, no matter what.

Next Post What you did in Iraq & Libya is the real barbarism – Russian FM spox rebukes US envoy to UN: Zio-Watch, September 26, 2016