Commentary — “When I hear Patrick Cohen speaking, I say to myself, you see, the gas chambers … too bad.” At $24,000, those are some pretty expensive words. Maybe something is lost in translation, but there is not threat in those words. There is no incitement. He is not saying “Somebody ought to whack this guy!” But in France, the Jewish privilege of being legally protected from “antisemitism” means that anyone making a joke at a Jew’s expense that in any way references their Jewishness does so at his own risk of financial peril. Jewish sensitivities alone receive such privileged protection. Comedic attacks on Christianity are welcome in France. French Prime Minister Valls is, I am sure, in touch this very minute with the Jewish agents Larry David and Sarah Silverman in order to set up a French tour for those comedians to assert their Jewishness by glorifying obscenity and attacking Christian and European sensibilities.

for comment about Nazi gas chambers to radio journalist.

French comedian Dieudonne M’bala M’bala was fined 22,500 euros ($24,000) on Thursday for a jibe against a radio journalist in 2013 suggesting that hearing the broadcaster speak made him think of Nazi gas chambers.

Creator of the controversial “quenelle” gesture that went viral on social media two years ago, Dieudonne this week already received a suspended jail sentence for condoning terrorism with a joke about January’s Islamist attacks on a satirical magazine and a Jewish foodstore in Paris that killed 17.

In this latest case, he risked up to one year in prison and a 45,000 euro fine for incitement to racial hatred.

The provocative humor in his shows has long put Dieudonne at the centre of a fierce debate about freedom of expression.

When Radio France’s Patrick Cohen asked on air in 2013 whether media should pay so much attention to Dieudonne, he retorted that the journalist should consider emigrating.

“When I hear Patrick Cohen speaking, I say to myself, you see, the gas chambers … too bad,” said Dieudonne, the Paris-born son of a Cameroonian father and French mother. 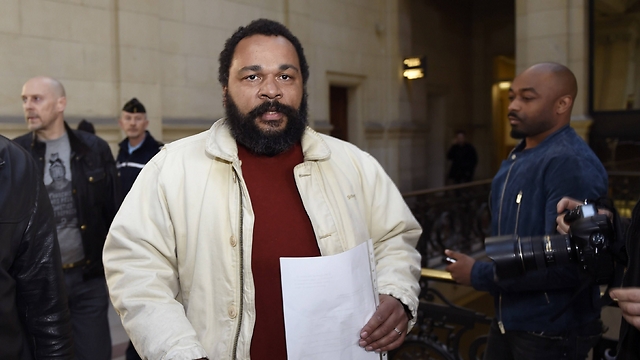 France has Europe’s largest Jewish minority, estimated at about 600,000, but is also seeing a steady emigration to Israel of Jews who say they no longer feel safe.

The 49-year-old comedian began his career with a Jewish sidekick in the early 1990s and appeared in several films.

Originally active with anti-racist, left-wing groups, he began openly criticising Jews and Israel in 2002, and ran in the European elections two years later with a pro-Palestinian party.

Dieudonne argues that his trademark “quenelle” sign is a gesture of non-conformism and anti-Zionism. Critics see it as a blatant variant of the Nazi salute.

Next Post Is there any significance to the Obama-Netanyahu Rift?