It is common belief in China that the “Jews control America”—and that this is a behavioral trait which Chinese people admire, an article in the Jewish Tablet magazine has said.

Jewish journalist Clarissa Sebag-Montefiore, writing in an article titled “The Chinese Believe That the Jews Control America. Is That a Good Thing?” painted an overall positive picture of what Chinese people believe about Jews, but still let slip some remarkable insights into how the Chinese people have a generally accurate perception of the full extent to which the Jewish lobby runs America. 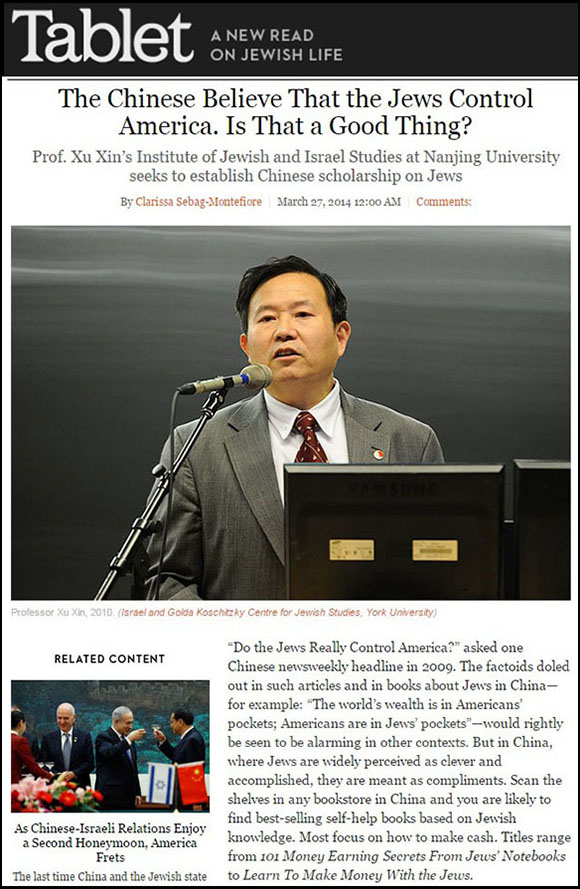 Sebag-Montefiore starts by discussing how many Chinese magazines and books openly discuss how Jews control America:

“Do the Jews Really Control America?” asked one Chinese newsweekly headline in 2009. The factoids doled out in such articles and in books about Jews in China—for example: “The world’s wealth is in Americans’ pockets; Americans are in Jews’ pockets”—would rightly be seen to be alarming in other contexts. But in China, where Jews are widely perceived as clever and accomplished, they are meant as compliments.

Scan the shelves in any bookstore in China and you are likely to find best-selling self-help books based on Jewish knowledge. Most focus on how to make cash. Titles range from 101 Money Earning Secrets From Jews’ Notebooks to Learn To Make Money With the Jews.

The Tablet article goes on to reveal what Chinese people think about Jews and media control:

In a TV interview he explained that he would be an ideal newspaper magnate because “I am very good at working with Jews”—who, he said, controlled the media.

The Tablet article goes on to discuss an interview with Professor Xu Xin, director of the “Diane and Guilford Glazer Institute of Jewish and Israel Studies” at Nanjing University.

Xu, the 65-year-old pioneer of Jewish studies in China, is campaigning to change that—and, by doing so, challenging entrenched stereotypes. The diminutive professor has made it his life’s pursuit to present a more nuanced view of the Jewish race and religion to his countrymen: one based on scholarship rather than rumor.

Not surprisingly, we learn from the Tablet article that the reason why this “Institute of Jewish Studies” is so named is because it is funded by wealthy Jews from America:

The institute is funded largely by foreign Jewish donors, who have their own interest in seeing “portrayals of Judaism propagated in a more balanced way,” the article helpfully informs its readers.

In other words, the Jewish lobby in America has launched a determined effort to start controlling the way Jews are perceived in China—and to do this, they have followed the strategy they employed in America—by first tackling the educational institutions for infiltration.

Even Professor Xu’s inadvertent remarks, as quoted by the Tablet, revealed precisely how incisive many Chinese are to Jewish Supremacist infiltration tactics. According to the article, Professor Xu has:

[R]respect for Henry Kissinger, who orchestrated the start of American relations with China. Like Salinger, Bellow, Freud, and the godfather of Communism Karl Marx, Kissinger was a Jew. “He was a refugee and an immigrant to the U.S., but within 20 years he had made his way to become secretary of State. How come?” Xu wondered.

Professor Xu’s question is valid: How could a Jewish refugee rise to the position of controlling America’s foreign policy for decades, if not the overwhelming Jewish tribalism networking and power in government and media ? Kissinger’s astonishing rise took both his upper echelon Jewish connections as well as a Jewish-dominated media telling us how brilliant he was (and is) in the face of the unmitigated disaster of the Vietnam War in which he played a pivotal role for years in the Nixon administration.

The Tablet article then tries and explain why the Chinese would have such attitudes and assumptions about Jewish behavior—and why they would be so openly expressed.

The reason, the Tablet article says, is that the “Chinese recognize, and embrace, common characteristics between their culture and Jewish culture.”

The real reason is of course that the Jewish Lobby is non-existent in China, and they therefore are not able to exert the sort of censorship there which they regularly enforce in America and Europe.

However, it should be pointed out that Xu recognizes Jewish power over the Western media, but perhaps he doesn’t full realize that when reads Western books about Jews they are actually books by Jews who are seking to convey to Gentiles in the West a very positive image of their people.

An intelligent person though, can look at the facts proffered by the Jewish writers and then reinterpret them. Professor Xu has definitely deciphered a great deal of important information about the kingpins of globalism.