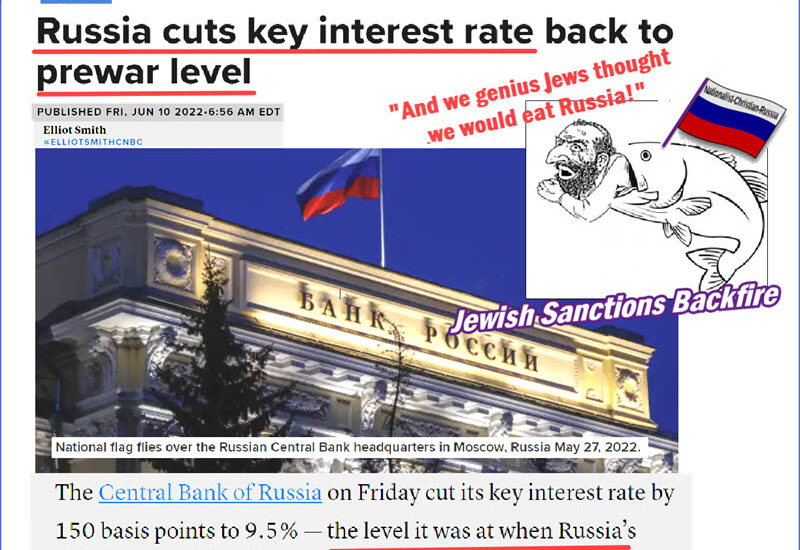 Jews Made a Huge Mistake in Starting this Insane Ukraine War!

Jewish global media supremacy  puts Jewish interests and yes, even wars over human rights and our own interests.” It is destructive to goyim (nonJewish) interests and rights.
This Global elite had fought a war with Europeans and all humanity since the days of the the Greeks and the Romans. They now use us and the West as sacrificial lambs in an attempt to destroy Russia and to keep Ukraine totally under Jewish Supremacy.
It is a is fact, not a conspiracy theory.
They lead the best of the goyim in a hopeless war that will wipe out a whole generation of Ukrainians and the real interests of the Ukrainian people. They cannot win this war. Fighting it is suicide, knocking Ukraine back decades. It is only to advance the Jewish war on Russia.
The Jewish dictatorship got Jews out of harm’s way while Ukrainians would be slaughtered.
Anyone who believes that Nazis control Ukraine is deaf, dumb, blind and totally ignorant who rules Ukraine. Every Key position, media, gov and money power in Ukraine is in Jewish hands.
Whatever “Nazis” there are duped by these Jews who are descendants of the same Jewish Bolsheviks that killed 11 million Ukrainians in the Holodomor! Jews hate Cossacks, stupid!
The Jews call anyone who defends European heritage and rights a “Nazi.” Any “Nazi” who believes the Russians are the enemy rather than the Jewish criminal tyrants who truly hate Ukraine, Ukrainians, Cossacks and the Rus people (Kievan Rus) and truly Europe, is a sucker! The Kievan Rus is Ukraine: Rus (the same as Russian).
Ukraine is no Nazi State, It is a Jewish tyranny just like Globalism. they have racial supremacy over international banking, the Jewnited States of America, the EU, over Hollywood Media, over social media and over the Internet which now controls much opinion of the entire world. All the major players behind this insane war are Jews, both in government (USA} and in Global media)
the Jewish media tell us the war is an Unprovoked War by Russia against Ukraine. It is the same Cabal lies (from the Jewish word Kabbala) that told us Iraq had WMDs. Like Iraq, this war was created by the same Jewish controlled Jewnited States of America and the Global Jewish Media!
Jewish Global Supremacy started this bloody criminal war, has led to loss of precious Ukrainian lives and Russian lives. But, the fault is not Russia, Russia had no choice because the Jewish Globalists took over Ukraine in 2014 & was set to invade the Donbas and Crimea!
But, these Jewish tyrants are not as brilliant as they constantly tell us they are! They made a huge mistake The War & sanctions makes Russia stronger and will Europe will finally realize the evil threat of Jewish racial supremacy to true European interests and survival.
Make mistake and global Jewish Organization is the most racist, supremacist, and tyrannical power on Earth!
Millions of Europeans will face disaster and millions of other people will suffer starvation and horror because of Jewish Global Supremacy!