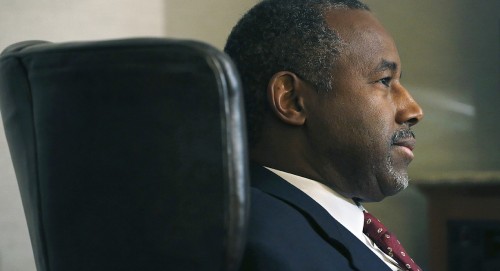 West Point has no record of Carson applying, much less being extended admission. | AP Photo

Ben Carson’s campaign on Friday admitted, in a response to an inquiry from POLITICO, that a central point in his inspirational personal story was fabricated: his application and acceptance into the U.S. Military Academy at West Point.

The academy has occupied a central place in Carson’s tale for years. According to a story told in Carson’s book, “Gifted Hands,” the then-17 year old was introduced in 1969 to Gen. William Westmoreland, who had just ended his command of U.S. forces in Vietnam, and the two dined together. That meeting, according to Carson’s telling, was followed by a “full scholarship” to the military academy.

West Point, however, has no record of Carson applying, much less being extended admission.

When presented with this evidence, Carson’s campaign conceded the story was false.

“Dr. Carson was the top ROTC student in the City of Detroit,” campaign manager Barry Bennett wrote in an email to POLITICO. “In that role he was invited to meet General Westmoreland. He believes it was at a banquet. He can’t remember with specificity their brief conversation but it centered around Dr. Carson’s performance as ROTC City Executive Officer.”
“He was introduced to folks from West Point by his ROTC Supervisors,” Bennett went on. “They told him they could help him get an appointment based on his grades and performance in ROTC. He considered it but in the end did not seek admission.”

This admission comes as serious questions about other points of fact in Carson’s personal narrative are questioned, including the seminal episode in which he claimed to have attempted to stab a close friend. Similarly, details have emerged that cast doubt on the nature of Carson’s encounter with one of the most prominent military men of that era.

The West Point spokeswoman said it is certainly possible Carson talked with Westmoreland, and perhaps the general even encouraged him to apply to West Point. However, she said the general would have explained the benefits of a West Point education without guaranteeing him entry.

An application to West Point begins with a nomination by a member of Congress or another prominent government or military official. After that, a rigorous vetting process begins. If offered admission, all costs are covered; indeed there are no “full scholarships,” per se.

In his popular book “Gifted Hands,” Carson says he excelled in his ROTC program at Detroit’s Southwestern High School, earning the respect of his superiors – just a couple years after anger problems led him to try to murder a friend. He attained the rank of second lieutenant by his senior year of high school and became the student leader of the city’s ROTC programs.

In May of his senior year, he was chosen to march in the city’s Memorial Day parade.

“I felt so proud, my chest bursting with ribbons and braids of every kind. To make it more wonderful, we had important visitors that day. Two soldiers who had won the Congressional Medal of Honor in Viet Nam were present,” he wrote. “More exciting to me, General William Westmoreland (very prominent in the Viet Nam war) attended with an impressive entourage. Afterward, Sgt. Hunt” – his high school ROTC director – “introduced me to General Westmoreland, and I had dinner with him and the Congressional Medal winners. Later I was offered a full scholarship to West Point.”

But, according to records of Westmoreland’s schedule that were provided by the U.S. Army, the general did not visit Detroit around Memorial Day in 1969 or have dinner with Carson. In fact, the general’s records suggest he was in Washington that day and played tennis at 6:45 p.m.
There are, however, several reports of an event similar to the one Carson described in February of that year. Then, Westmoreland was the featured guest at a 1,500-person banquet to celebrate Medal of Honor winner Dwight Johnson. The event drew prominent guests, including the governor at the time, the mayor of Detroit, the president of Ford Motor Company and nine previous Medal of Honor recipients, according to an Associated Press account of the event.

Carson, a leader of the city’s ROTC program at the time, may have been among the invited guests at the $10-a-plate event.

Carson’s later retelling of the events in this period of his life downplays his meeting with Westmoreland and that event’s link to a West Point acceptance. In his January 2015 book “You Have a Brain” – a book geared toward teenagers – Carson again recalls his rapid rise through his high school’s ROTC program to become the top student officer in the city.

“That position allowed me the chance to meet four-star general William Westmoreland, who had commanded all American forces in Vietnam before being promoted to Army Chief of Staff at the Pentagon in Washington, D.C.,” he wrote. “I also represented the Junior ROTC at a dinner for Congressional Medal of Honor winners, marched at the front of Detroit’s Memorial Day parade as head of an ROTC contingent, and was offered a full scholarship to West Point.”

Carson has said he turned down the supposed offer of admission because he knew he wanted to be a doctor and attending West Point would have required four years of military service after graduation.

Cecil Murphey, who ghost-wrote “Gifted Hands,” told POLITICO that his memory of Carson’s exchange with Westmoreland was hazy.

“My gut response is that it was not a private meeting but there were others there,” he said in an email. “The general took a liking to Ben and opened doors.”