By Dr. Patrick Slattery — I first became aware of the Khazars from a textbook entitled “The Course of Russian History” by Melvin Wren. The book described the Khazars as a Turkic people who established an empire in the seventh century centered on the lower Volga, a region that would eventually become part of the Russian heartland. 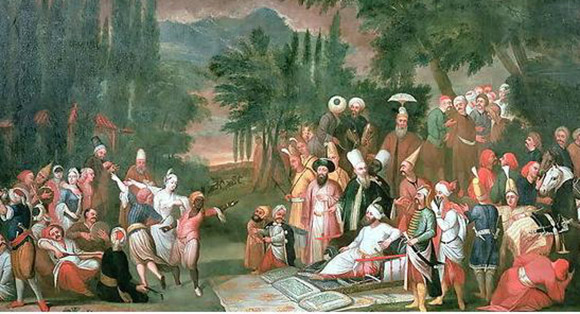 The book also mentioned that when King Vladamir was looking to improve his international standing by forsaking Russia’s pagan gods for one of the monotheistic religions practiced by surrounding empires, the Khazar’s Judaism was one of the options that Vladamir considered.

The book indicated that Khazar rulers had embraced Judaism, but did not impose it on their subjected peoples.

It was not until much later that I became aware of Arthur Koestler’s theory that the Khazar’s were the ancestors of the Ashkenazi Jews. I remember being very surprised by the reaction of a Zionist Jewish student of mine when I raised the Khazars as an example of a group that had converted to Judaism.

Perplexed at why he should be so upset, I set about investigating the Khazars and came across Koestler’s theory. Immediately, I understood its political implications. Religious and secular Jews alike clung to the notion that their people were “returning to their homeland” after 2000 years in exile.

The narrative is deeply intertwined with the Israeli state. Jewish immigration policy to Israel is governed by a “Law of Return.” Judaism is the established religion, with much of domestic policy handed over to the clergy. Political rhetoric is chalk full of biblical references, and institutions, buildings, and weaponry are adorned with ancient Jewish symbols.

For many opponents of the Zionist project, the Khazar theory appeared as a means of delegitimizing the Jewish claim to the land. For some anti-Zionist Christians, the Khazar theory allowed them to take an adversarial attitude towards the bulk of modern Jewry while maintaining a strong identification with the Hebrews of the Bible.

However, as appealing as the theory was, it just seemed wrong to me. For the Khazars of history to morph into today’s Ashkenazim, they would have had to have undergone TWO conversions. The first, the religious conversion to Judaism, may have occurred, although their is a lack of evidence that the conversion went beyond the elite.

But the second conversion was what was most problematic. That would be the linguistic conversion from the Khazar’s Turkic language to the Yiddish of the Ashkenazim.

There is no explanation for how an empires-worth of Turkic people surrounded by Slavs, Persians, Armenians, and other Turks would wind up speaking a Germanic language. There were no Germans anywhere near them until Catherine the Great recruited Germans into the region in the late 18th Century.

There is no such right in international law — not for the Jews or anyone else. And so when the straw man of Ashkenazim’s Khazar origins is knocked down, the Jewish claim to Palestine is unnecessarily strengthened.

Secondly, it leads to the false conclusion that there has been nothing wrong with the behavior of the Jews (whether they be modern Sephardic, Medieval European, or ancient Middle Eastern), it has just been those evil Khazars.

The fact is that there has been quite a lot wrong with Jewish behavior vis a vis their neighbors spanning the great expanses of time and space.

Next Post Dr. David Duke and Kevin MacDonald on the “Khazar Theory”