The Zionist Supremacist state of Israel—which receives over $8 million every day from American taxpayers—repays the US by spying “continuously” on America, stealing its technological and military secrets, and even wiretaps its most subservient lapdogs in the government, including the president, a new report has revealed. 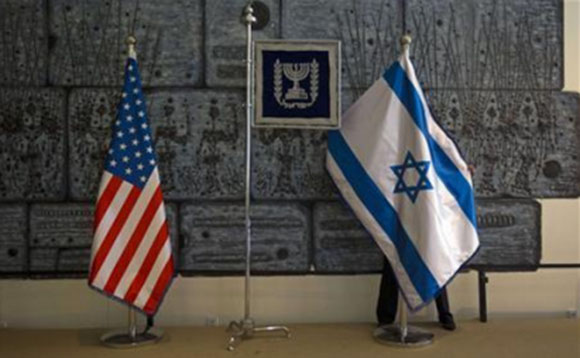 According to the latest revelation in the new Newsweek magazine, the extent of Jewish Supremacist spying in America extends as far as listening in on the top-secret conversations of the President of the Unites States.

By way of evidence, the Newsweek article quotes transcripts from phone calls between former U.S. President Bill Clinton and other leaders during critical stages of the Middle East peace talks in 1999.

According to the report, which cites British-Israeli political scientist Aharon Bregman’s upcoming book “Cursed Victory: A History of Israel and the Occupied Territories,” Israeli intelligence eavesdropped on conversations between Clinton and the late Syrian President Hafez al-Assad.

The book also alleges Israel tapped calls between Assad and Syria’s foreign minister in the U.S., as well as discussions between Clinton and former Israeli Prime Minister Ehud Barak.

According to Bregman, Israel’s knowledge of the American and Syrian stance in the ongoing negotiations “gave Israel a huge advantage, allowing them to be ahead of the game in peace negotiations and know what to expect in the actual talks and maneuver accordingly.”

The Newsweek reports have claimed that Israel’s alleged espionage against the U.S. has continued for decades.

According to an internal NSA document recently published by journalist Glenn Greenwald, Israel’s Unit 8200 eavesdroppers “target us to learn our positions on Middle East problems.”

A CIA-led National Intelligence Estimate on cyberthreats in 2013 “ranked Israel the third most aggressive intelligence service against the U.S.”

All this raises the question of how it is possible for the Israeli secret service to intercept the encrypted conversations of the President of the United States—supposedly the most secure communication system in the world.

The answer to this question lies in the presence of Jewish Supremacist single loyalty fifth columnists in America, who feign loyalty to America while actually remaining true to their real tribal loyalty.

This is made possible by the deliberate awarding of major in-house American government security contacts to “Israeli security companies”—many of which have been exposed as Mossad fronts.

This “awarding” of vital security contracts to Israeli companies is facilitated by the large number of single-loyalty Jewish Supremacists who have been placed in key positions in the US administration, including the Department of Homeland Security and elsewhere.

This direct involvement of Israel in American security has been recently expanded through passage of 2012’s United States-Israel Enhanced Security Cooperation Act.

Israeli technology companies also produce many of the devices used by police departments and the FBI to tap telephone conversations and record call data.

Israel conducts much of its high-tech spying through its corporate presence in the United States. It is heavily embedded in the telecommunications industry, which permits access to the exchange of information.

The Whitewater investigation revealed that President Bill Clinton warned Monica Lewinsky that their phone-sex conversations might have been recorded by a “foreign government”—which everyone knows to have been Israel.

Two Israeli companies in particular—Amdocs and Comverse Infosys, both of which are headquartered in Israel—do significant business in the United States.

Amdocs, which has contracts with the 25 largest telephone companies in the U.S. that together handle 90 percent of all calls made, logs all calls that go out and come in on the system. It does not record the conversations themselves, but the records provide patterns, referred to as “traffic analysis,” that can provide intelligence leads.  In 1999, the National Security Agency warned that records of calls made in the United States were winding up in Israel.

Comverse Infosys provides wiretapping equipment to law enforcement throughout the United States and also has large contracts with the Israeli government, which reimburses up to 50 percent of the company’s research and development costs.

Because equipment used to tap phones for law enforcement is integrated into the networks that phone companies operate, it cannot be detected. Phone calls are intercepted, recorded, stored, and transmitted to investigators by Comverse, which claims that it has to be “hands on” with its equipment to maintain the system.

Many experts believe that it is relatively easy to create a so-called “back door” that permits the recording to be sent to a second party, unknown to the authorized law-enforcement recipient. And Comverse equipment has never been inspected by FBI or NSA experts to determine whether the information it collects can be leaked, reportedly because senior government managers block such inquiries.

According to a Fox News investigative report, which was later deleted from Fox’s website under pressure from various pro-Israel groups, DEA and FBI sources say that even to suggest that Israel might be spying using Comverse “is considered career suicide.”

Israeli contractors and companies dot the homeland security landscape but only rarely attract any attention. One notable exception to that rule was the 2002 attempt by New Jersey governor Jim McGreevey to appoint an Israeli Golan Cipel, who was also his lover, as his Homeland Security adviser.

Magal Security Systems, which has four subsidiary companies in the U.S., has a contract for security at American nuclear power plants.

It should come, therefore, as no surprise that the Jewish Supremacists are able to tap the telephone conversations of the President—after all, given their obsessive control over the organs of government, the media and the financial sector, one would expect them to monitor their lapdogs to make sure they remain in line.

Next Post Dr. David Duke on the Jewish Lobby and Australia: Interview on Press TV