One of America’s leading journalists—a veteran of international and Middle Eastern reporting—Chris Hedges, has finally broken ranks with his profession and has admitted openly that America’s media deliberately lies about Israel to the US public.

The astonishing admission is contained in a lengthy mea culpa article published on the leftist news site Truthdig. Hedges spent more than twenty years as a foreign correspondent in Central America, the Middle East, Africa and the Balkans, working for the The Christian Science Monitor, NPR, The Dallas Morning News, and The New York Times, where he was a foreign correspondent for fifteen years (1990–2005). 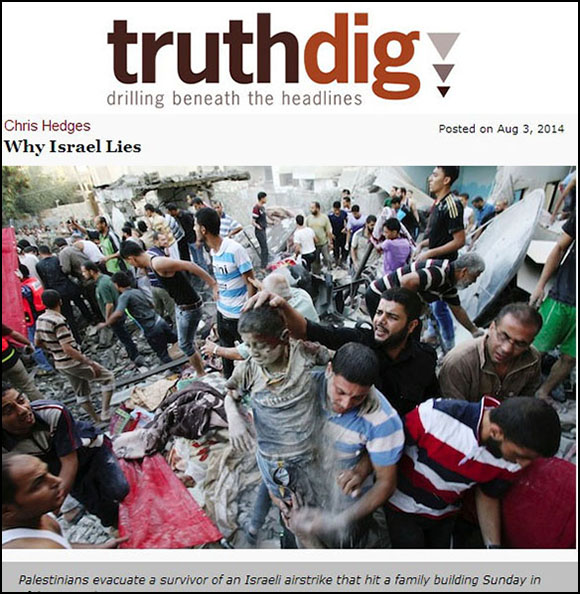 In his “confession”—titled “Why Israel Lies,” Hedges revealed how the Jewish Supremacist state lies, distorts and twists reality like no other government on earth—and how these lies and distortions are then deliberately inserted into the “news” broadcast to Americans, even when the journalists in question know very well that they are lies.

“Israel engages in the kinds of jaw-dropping lies that characterize despotic and totalitarian regimes. It does not deform the truth; it inverts it. It routinely paints a picture for the outside world that is diametrically opposed to reality,” Hedges wrote.

“And all of us reporters who have covered the occupied territories have run into Israel’s Alice-in-Wonderland narratives, which we dutifully insert into our stories—required under the rules of American journalism—although we know they are untrue.”

Hedges then goes on to list a number of pertinent examples of the sort of lies told by the Zio-fanatics which are then transmitted to the American public as so-called factual news:

“I saw small boys baited and killed by Israeli soldiers in the Gaza refugee camp of Khan Younis. Such incidents, in the Israeli lexicon, become children caught in crossfire.

“I was in Gaza when F-16 attack jets dropped 1,000-pound iron fragmentation bombs on overcrowded hovels in Gaza City. I saw the corpses of the victims, including children. This became a surgical strike on a bomb-making factory.

“I have watched Israel demolish homes and entire apartment blocks to create wide buffer zones between the Palestinians and the Israeli troops that ring Gaza. The destruction becomes the demolition of the homes of terrorists.

“I have stood in the remains of schools—Israel struck two United Nations schools in the last six days, causing at least 10 fatalities at one in Rafah on Sunday and at least 19 at one in the Jebaliya refugee camp Wednesday—as well as medical clinics and mosques.

“I have heard Israel claim that errant rockets or mortar fire from the Palestinians caused these and other deaths, or that the attacked spots were being used as arms depots or launching sites.”

Hedges then reveals that he, “along with every other reporter he knows,” has never seen any evidence that Hamas uses civilians as human shields. This narrative is, however, widely reported in the Zio-controlled media fed to the west all the time.

Hedges goes on to say that Israel’s rationale for using this “big lie” technique is to “elicit racism among its supporters and terror among its victims.”

He points out that by “painting a picture of an army that never attacks civilians, that indeed goes out of its way to protect them, the Big Lie says Israelis are civilized and humane, and their Palestinian opponents are inhuman monsters.

“The Big Lie serves the idea that the slaughter in Gaza is a clash of civilizations, a war between democracy, decency and honor on one side and Islamic barbarism on the other.

“And in the uncommon cases when news of atrocities penetrates to the wider public, Israel blames the destruction and casualties on Hamas.”

Hedges goes on to point out that George Orwell in his novel “Nineteen Eighty-Four” called this form of propaganda “doublethink,” which is “logic against logic” which “repudiate[s] morality while laying claim to it.”

Although Hedges does not say it, the true meaning of his confession is that there is in fact no more “western” morality in the media–it is just Jewish morality now.

Hedges quotes “the father of American public relations,” the Jewish Supremacist Edward Bernays (a well-known Jewish racist who was nephew of Sigmund Freud) as explaining the Big Lie technique as being  “limited only by the propagandist’s capacity to fathom and harness the undercurrents of individual and mass psychology.

“And since most supporters of Israel do not have a desire to know the truth, a truth that would force them to examine their own racism and self-delusions about Zionist and Western moral superiority, like packs of famished dogs they lap up the lies fed to them by the Israeli government.”

Hedge’s admission that journalists deliberately allow outright lies to be inserted into their coverage of Israel is yet another indication that the power of the Internet is inevitably undermining the previously absolute Jewish Supremacist stranglehold on the “facts” which were available to the general public.

Prior to the age of online videos, independent news sites, blogs and social media, the public would have had no other “facts” to go on except those of the deliberately manipulated “news” stories as described by Hedges.

Now, however, this Jewish Supremacist hegemony over information has been broken—and even journalists like Hedges can openly admit that their “news” is altered to fit in with the demands of the Zio-tribalist racists.

Hedges concludes his latest article with this telling truth:

See the Dr. Duke video below which includes a discussion of the influence of Edward Bernays:

Next Post Hear Dr. David Duke on How a Leading Journalist Has Exposed Israeli and Zionist Lies in the Media