By Dr. Patrick Slattery — The core argument against President Donald Trump’s executive order restricting immigration from seven problematic Middle Eastern countries is that it may discriminate against Muslims. That some Christians from Syria or elsewhere may wind up getting preferential treatment is tantamount, according to this argument, to the establishment of a religion in violation of the First Amendment to the Constitution.

The fact is that, at least in recent decades, America has provided preferential treatment to a particular religious group, and it sure ain’t Presbyterians! Below I quote from H.R.4681 of the 106th Congress, which was passed as Public Law No. 106-378 on October 27, 2000.

To provide for the adjustment of status of certain Syrian nationals

The Congress finds as follows:
(1) President Bush and President Clinton successively
conducted successful negotiations with the Government of Syria
to bring about the release of members of the Syrian Jewish
population and their immigration to the United States.
(2) In order to accommodate the Syrian Government, the
United States was required to admit these aliens by first
granting them temporary nonimmigrant visas and subsequently
granting them asylum, rather than admitting them as refugees (as
is ordinarily done when the United States grants refuge to
members of a persecuted alien minority group).
(3) The asylee status of these aliens has resulted in a long
and unnecessary delay in their adjustment to lawful permanent
resident status that would not have been encountered had they
been admitted as refugees.
(4) This delay has impaired these aliens’ ability to work in
their chosen professions, travel freely, and apply for
naturalization.
(5) The Attorney General should act without further delay to
grant lawful permanent resident status to these aliens in
accordance with section 2.

(b) <<NOTE: Applicability.>> Aliens Eligible for Adjustment of
Status.–The benefits provided by subsection (a) shall apply to any
alien–
(1) who–
(A) is a Jewish national of Syria;
(B) arrived in the United States after December 31,
1991, after being permitted by the Syrian Government to
depart from Syria; and
(C) is physically present in the United States at
the time of filing the application described in
subsection (a)(1); or
(2) who is the spouse, child, or unmarried son or daughter
of an alien described in paragraph (1).

So here you have it. A law passed by Congress that specifically gave preferential treatment to one religious group from Syria — the Jews — over all other groups, namely Muslims and Christians.

Ten years earlier, an amendment to H.R.3743 – Foreign Operations, Export Financing, and Related Programs Appropriations Act, 1990 opened the door to a tsunami of Jews from the former Soviet Union. This is commonly known as “The Lautenberg Amendment,” not to be confused with another Lautenberg Amendment concerning gun rights.

This opened the floodgates, allowing “some 350,000 to 400,000 Jews from the former Soviet Union to gain entry into the United States without having to prove they were individually persecuted.” 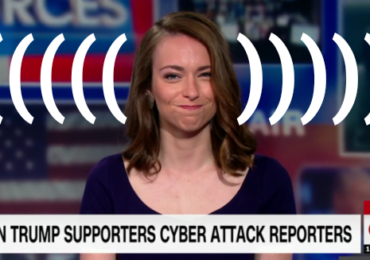 Julia Ioffe, who wrote a hit piece on First Lady Melania and insinuated that President Trump and Ivanka have a sexual relationship, is one of the hundreds of thousands of Jews who benefited from the Lautenberg Amendment… and Jewish privilege in college admissions… and Jewish nepotism in hiring.

Those covered by the Lautenberg Amendment are eligible for Special Cash Assistance and for Federal Public Assistance Programs including, but not limited to, Social Security, Medicaid, Food Stamps, and Temporary Assistance for Needy Families.

While the Immigration and Nationality Act requires prospective refugees to establish a well-founded fear of persecution as individuals, Soviet Jews simply qualified as refugees based on their identification as Jews.

This adds a whole new meaning to David Brooke’s article “The Chosen Getting in.”

Previous Post Dr. Duke and Eric Striker Expose the Jewish NeoCon Commies Like Bill Kristol advocating the Destruction of White People!
Next Post Dr. Duke and Mark Collett of the UK expose the JEWdicial coup in overturning the rights of the President of the United States and the American Elected Government. Great Show!